Former Hearts winger Jamie Walker is believed to be discussing an early release from his contract with English side Wigan Athletic – with a view to returning to Tynecastle.

The 25-year-old is understood to be looking to return to the club where he made his name. An integral part of the Hearts team that raced away with the Championship in 2015, Walker scored 40 goals during his time at Tynecastle.

Hearts have not made any comment as yet, but it is understood that manager Craig Levein is keen to take Walker back, with the Gorgie club looking for some much-needed width in the team. 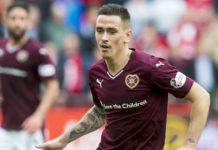 Hearts Jamie Walker Ruled Out Until End of November