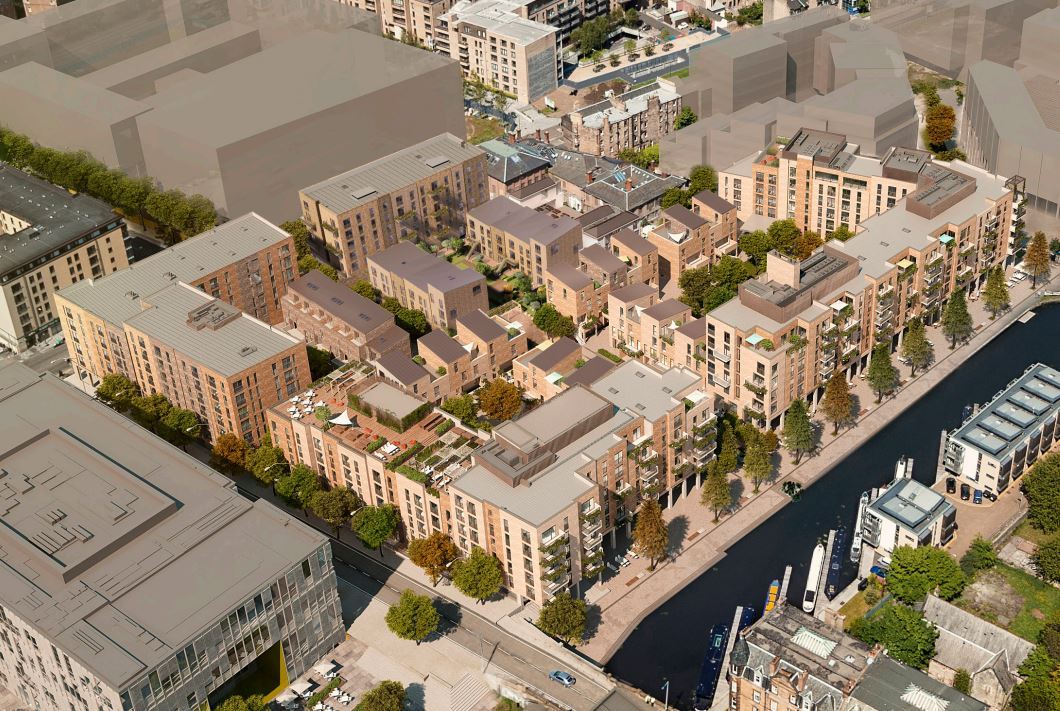 Plans to build “a new canalside neighbourhood” in Fountainbridge are set to be pushed forward – with proposals tabled for more social rented homes to be included in the overhaul.

A new masterplan is to be drawn up for the wider Fountainbridge site as the council gets ready to offer contracts to partners for the project. The council hopes to start enabling works by the end of 2019 and the site is expected to be fully built by 2025.
The updated plans for the site between Fountainbridge and the Union Canal now includes 113 homes at one of the plots available for social rent. Overall, the development will include 436 new homes with 145 of them affordable, 10,333 sqm of office space along with new shops and an extension to Boroughmuir High School.

Green ward Clllr Gavin Corbett chairs the Fountainbridge Sounding Board, which brings together developers and community groups. He said: “The council site at Fountainbridge is one of the most exciting opportunities in Edinburgh.

“With the opening of Boroughmuir High School and the loving restoration of the rubber factory by Edinburgh Printmakers, the jigsaw is gradually emerging. However, the biggest developments have still to come with the council site, Vastint and MODA between them providing over 1,000 new homes plus workplaces, new green spaces and a district heating system.”

He added: “The council site already has a detailed masterplan which has been through a lot of community consultation.

“Over the last couple of months the council has been seeking proposals from potential development partners so we should start to see works on the ground this year, and then over the next five to seven years. People in the area have been waiting a long time for the development to start and I’m determined we should see a new canalside neighbourhood which will be the envy of Scotland.”

The site, formerly branded by the council as India Quay, was the home of the former Fountain Brewery which closed in 2004. It was purchased by the council in 2012 and initial planning permission was granted in October 2016.
If approved, the social housing will include a colony block featuring three ground floor apartments, all wheelchair accessible. Six triplex apartments will also be built, with a shared landing and a terrace on the third floor level. Plans also include one triplex house with a terrace on the third floor level.

Housing and economy convener, Cllr Kate Campbell, said: “We recognise the importance of building social and affordable homes in and around the city centre. And we have the opportunity at Fountainbridge because we own the land. That’s why we have put in an application for all 113 homes on this plot to be for social rent. In addition we’re building 32 homes for mid market rent on the adjacent plot.
“This was strongly supported at the housing and economy committee by councillors, and backed up by a deputation from local people representing community groups. There is quite a transient population already in the area and everyone recognises that social tenants are more likely to be there for longer, putting down roots and becoming a part of the community as well as strengthening it.
“Building more affordable homes in central locations will help to create better balanced, mixed and resilient communities and is something we are considering very carefully as we progress towards our target of 20,000 affordable homes across the city over 10 years.”