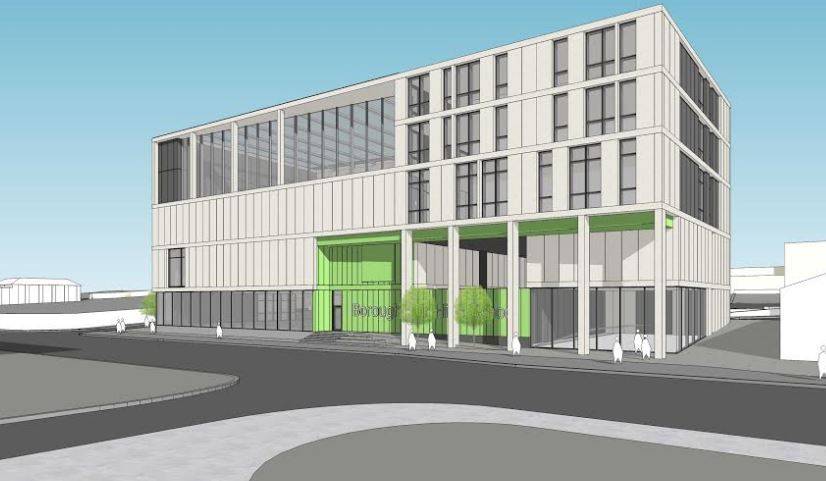 Boroughmuir High School was one of the flagship new high schools built during the last council administration and only opened last year.

Now plans for an extension to the new school designed by Allan Murray Architects have been drawn up as the £31m facility has already been found to be too small.

The new Boroughmuir High School opened to pupils in February 2018 but rising rolls pressures have meant that more space is needed. Proposals for an extension will be handed over to planners next month and the council hopes it will be open in August 2020.

The extension will be made up of 12 classrooms over three floors. The development will include a flexible studio space for PE and drama on the ground floor which could be used by the school and wider local community.

Education Convener, Cllr Ian Perry, said: “When we built the new Boroughmuir we made sure it had an increased capacity, however, predicting future school rolls is never an exact science and there’s been an unprecedented rise in the area’s school population.

“Boroughmuir is an exceptionally popular school with greater percentages of the catchment population now choosing to go there than before when they may have gone to private or other council schools and the stay on rate for senior years is higher than other schools.”

He added: “Add to this more and more families are choosing to stay in the area, possibly due to additional family sized properties becoming available given the rise in purpose built student accommodation, then it is no surprise that we are experiencing capacity issues.
“Our proposal will result in 12 extra classrooms over three floors, accessed from the north-west stair core of the current building, and a flexible studio space for PE and drama on the ground floor which could be used by the school and community.”

The extension, which is expected to cost around £4m, will help the school cater for an additional 300 pupils by 2027.

Conservative education spokesperson, Cllr Callum Laidlaw, said: “While the new Boroughmuir school is a very impressive building it’s disappointing that it already needs substantial work to expand it.
“Rising school rolls were known as the planning stage and it would have likely been more cost effective to factor these into the build rather than creating an ad-hoc extension. Hopefully it’s a lesson for future school builds in high density catchments.”

The council will need to invest more than £90m by 2027 to upgrade high schools across the city to provide enough space for pupils.

Green ward Cllr Gavin Corbett said: “I’ve been in the new school several times and I can see just what a fantastic setting it is. The extension on the Dundee Street side is the right place to go and will provide the extra space necessary to cope with a couple of hundred more students.
“However, having to add an extension barely a year after the school was built is an expensive and disruptive way to plan school buildings.  It would have been so much better to have got the forecasts right in the first place.
“Leaving aside the size of the school the other major issue for the site was the 17 month delay in getting the school finished. It is vital that the extension work is completed in the time-scale agreed.”