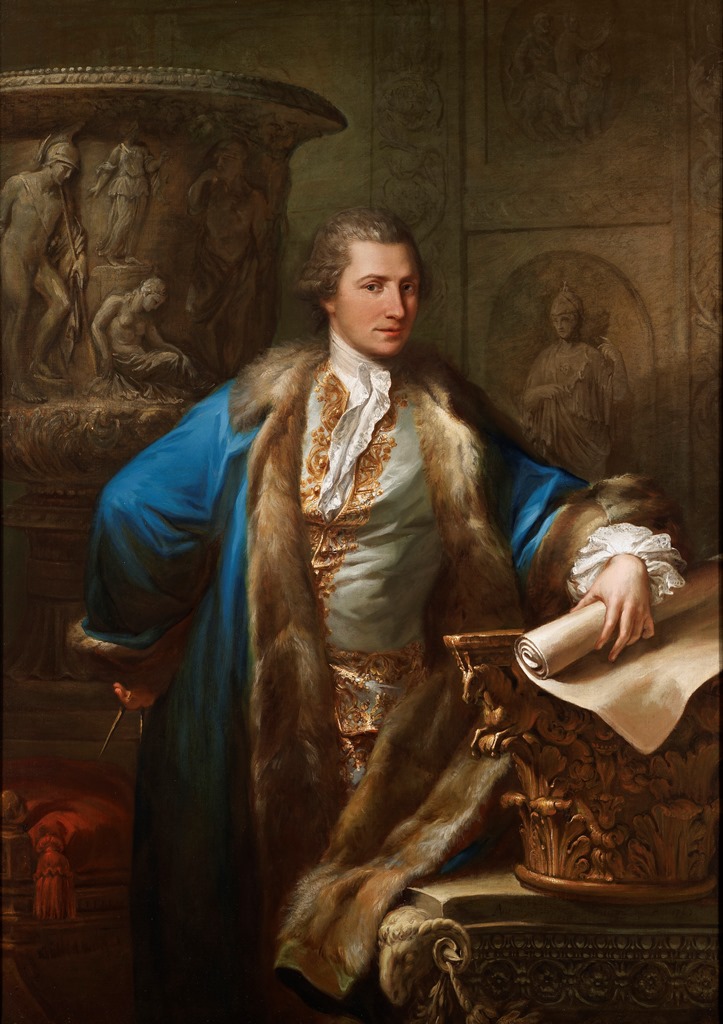 The National Galleries of Scotland (NGS) and the V&A have jointly acquired a portrait of James Adam of the 18th century architectural dynasty.

This portrait by Italian Antonio Zucchi (1726-95) is the third time that the two organisations have joined together to secure an outstanding artwork. The first two pieces of art were sculptures, the Three Graces and then The Campbell Sisters. This purchase has been made possible by a major grant from national charity Art Fund.

It will hang at the Scottish National Portrait Gallery among the 18th century collection before going to the V&A in London later this year.Then it will be shown at both locations on a seven year rotation.

Christopher Baker, Director of European and Scottish Art and Portraiture for the National Galleries of Scotland, commented: “James Adam’s portrait is a work of great swagger and refinement that demonstrates the confidence of the Scottish Adam family as seminal taste makers for eighteenth-century Europe. It represents a splendid addition to the collection of the National Galleries of Scotland and we are immensely grateful to both the Victoria and Albert Museum and the Art Fund for making its joint purchase possible.”

“We are very pleased to be helping both National Galleries Scotland and the V&A in acquiring this fine and important portrait of James Adam. It is fitting addition to both collections, marking the sitter’s legacy as a highly influential Scotsman with great significance to the history of British architecture and design, and we know it will enjoyed by a wide public in both locations.”

The painting depicts James Adam during his grand tour of Italy in 1763, before he returned to London to work with his brother, Robert Adam (1728-92). Dramatically posed and luxuriously dressed, he is surrounded by objects that refer to the study of the ancient world that inspired the neo-classical designs for which the Adam were renowned.

Robert and James Adam, along with their brothers John and William, were the sons of the mason-architect and entrepreneur William Adam (1689-1748). Together the family enjoyed the status of being Scotland’s foremost architects of the eighteenth century. Their role as designers of neo-classical buildings and interiors was to prove profoundly influential not only in Edinburgh and London but all across Europe, North America and Russia.

Robert and James established their architectural practice in 1758. They not only excelled at designing elegant Palladian buildings but also entire interior decorative schemes, including furniture, so ensuring a unity to their immensely popular neo-classical vision. Between 1773 and 1779 the brothers published The Works in Architecture of Robert and James Adam which played a key role in spreading knowledge of their work internationally.

James undertook a Grand Tour of Italy, to seek inspiration for his work, between 1760 and 1763. This impressive portrait was painted in the final year of his tour. It refers to his profession as an architect, and sees him hold dividers in one hand and paper in the other. However, he is also presented as a man of wealth and discrimination, dressed in a silk and fur trimmed gown, at ease with his knowledge of the remains of the classical world that surround him. This type of magnificent portraiture was commonly associated with travelling aristocrats, rather than architects.

The portrait has the distinction of being the only known work of such a subject by the painter Zucchi, who was born in Venice and later worked on a number of decorative paintings for major interior schemes designed by the Adam brothers, before marrying the painter Angelica Kauffmann (1741-1807) in 1781 and settling with her in Rome.

The sculptures depicted in the painting behind James include the Medici Vase and a variant of the Giustiniani Minerva – revered examples of ancient art which could be studied in Rome and, it was felt, could inspire contemporary design. Panels of so-called grotesque ornament frame the niche in which Minerva stands.

The most significant object depicted is the capital (the sculpted top of a column) in the foreground, on which James rests his left arm. It looks at first like a work from antiquity, but is in fact taken from a sculpture design by James Adam. While in Italy he made detailed plans for re-building the Houses of Parliament in London in a neo-classical style, a project that was never realised. As part of this scheme, he produced detailed drawings for a new British architectural order of columns, and combined on them the Scottish unicorn (clearly visible here) with an English lion. The drawings he made were used as the basis for creating a model made of wax that was coloured bronze – and it is this object, which sadly no longer survives, that is depicted by Zucchi. It acted as an extraordinary advertisement for Adam’s ingenuity as a designer and through the prominence of the unicorn, reminded his clientele of his Scottish heritage.

Until now James Adam has only been represented in the collection of the National Galleries of Scotland through a modest and informal drawing by Allan Ramsay (1713-84), while Robert Adam is the subject of two paste medallions by James Tassie (1735-99). Zucchi’s unique painted portrait complements his work as an engraver and decorative painter held in the V&A’s collection.