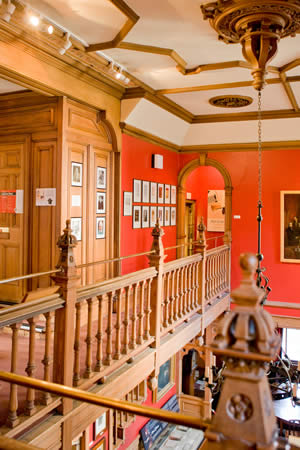 Throughout history there have been talented female writers, but rarely did they get a fair crack of the whip. All three Bronte sisters originally published under male pseudonyms, because, as Charlotte put it, female writers were “liable to be looked on with prejudice”. It may be easier for women to get published now, but they still struggle to not be judged first by their gender; perhaps it’s no wonder JK Rowling’s publishers felt it wise to use her initials rather than her first name if they wanted young boys to give Harry Potter a go.

Gender discrimination over the centuries has led to an enormous number of women in the arts going unnoticed, their skills under-valued, and that is a real loss. It’s time we brought them all out of the shadows of their male counterparts.

A good place to start is to take a walk up to Makars’ Court just off the Royal Mile. Look beyond the museum to Burns and Scott and Stevenson, talented and important as those fellas are, and look in the paving of the courtyard, in Scotland’s literary walk of fame. There you will find quotes from some of Scotland’s ground-breaking women writers. While mainly from the 1900’s or later, huddled amongst them you’ll find the words of a bold 17th century poet, Elizabeth Melville or Lady Culross. Elizabeth Melville was writing at the time of Scotland’s religious rebellions, and this is reflected in her poetry which is both spiritual and a defiant voice against the tyranny of the times. She spoke out when women weren’t supposed to, and her words resonated. She is the earliest known Scots woman to see her work in print, and many believe she was the inspiration for Bunyan’s Pilgrims’ Progress.

There are lots more women honoured in Makars’ courtyard; Helen Cruickshank, the suffragette, Scottish poet and icon of the Scottish Renaissance; the ‘doyenne’ of Scottish literature, Naomi Mitchison who penned over 90 books and still found time to campaign for women’s rights and birth control in the 1930s. There’s the historical novelist Dorothy Dunnett, most famous for the meticulously researched Lymond Chronicles. There’s Violet Jacob, a Scots language poet described by Hugh MacDiarmid as “the most considerable of contemporary vernacular poets”. Then there’s Nan Sheperd, a modernist writer whose words bring to life the Scottish landscape and nature of the north east.

Most famously of all, there is the indisputable giant of Scottish literature, the aptly named Muriel Spark. Her wit continues to sparkle some hundred years after her birth.

Many more women deserve a place here however, whose contributions to our cultural history should be more widely recognised. Literature is an important part of who we are, it reflects our lives back to us and helps us interpret the past, present and future: we need tales from men and women, from every part of our multi-layered society.

Happily things have come a long way for women in the arts in Scotland and we are so lucky to have the fabulous Jackie Kay as Scotland’s Makar, a poet who tackles big issues with authenticity, wit and warmth.  Sara Sheridan has been reminding us of the “phenomenal women of the past” both through her work as a successful novelist and TV writer, but even as co-founder of REEK perfume company, creating the Damn Rebel Bitches scent as a tribute to the many Jacobite Women overlooked by history in favour of supposedly bonnier male participants in the Uprisings.

We also have a Scotswoman, Carol Ann Duffy, about to complete her ten year stint as the UK’s Poet Laureate – the first woman (and Scot) to hold that post in more than 340 years – there’s a lot to be proud of and a whole lot more women’s tales to be told.  As Nan Sheperd’s flagstone in Makars’ Courtyard says “It’s a grand thing to get leave to live”. Through the words of incredible women like these living is made so much better for all of us.