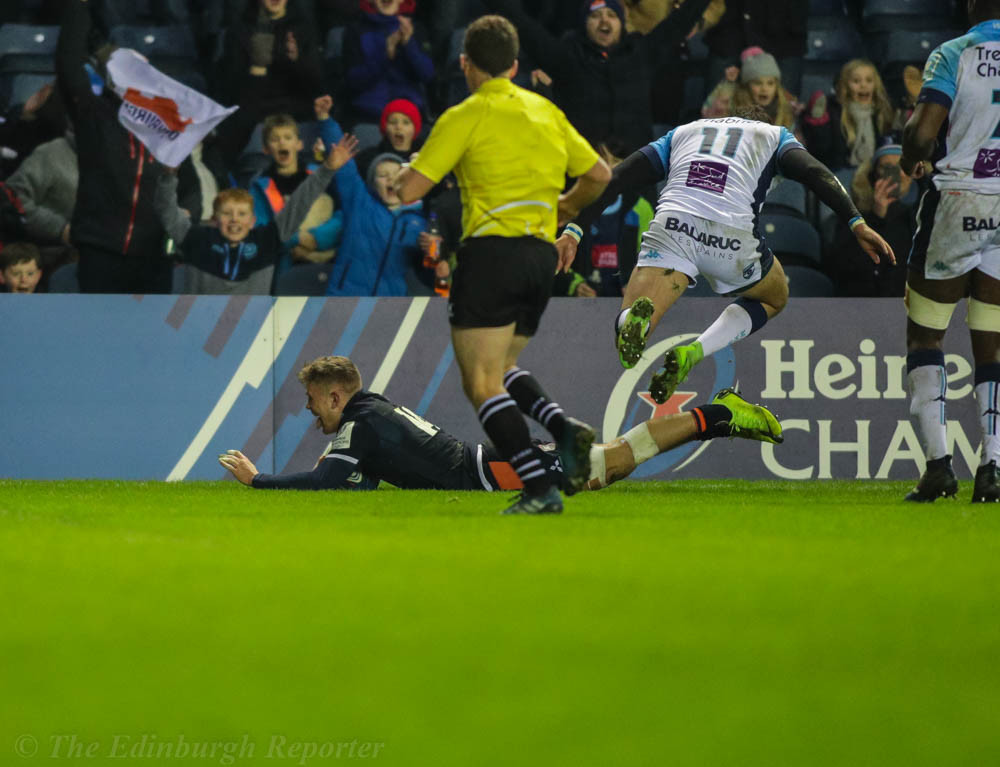 With a European Championship Quarter-final place up for grabs, Edinburgh were well aware that top French side, Montpelier, were more than capable of repeating the result of their first match back in October, in France, which the home side won 21-15.

The match at BT Murrayfield was a slow burner to start with as both sides probed a bit, but Edinburgh were first to put a meaningful attack together, Duhan van der Merwe providing the metres, and subsequently, a second penalty to get the first points on the board in the 13th minute – his South African team mate, Jaco van der Walt kicking the points.

The home side now ramped up the pressure on the visitors with Bill Mata breaking the gain line a couple of times and driving the defence back.

Reward came in the 17th minute when another indiscretion by the French side lead to another, kickable penalty for van der Walt, who duly obliged for 6-0.

Now Montpelier decided to turn up and took the game to the home side, swinging play from one side to the other through World-class scrum half, Ruan Pienaar, It was also around this time that Edinburgh’s Hamish Watson appeared to have injured his hand or arm.

However, doing that thing that rugby players do, he evaded the medical staff and joined the line, making a crucial tackle, with his non-injured side, off the back of a scrum, before being intercepted and taken off. Later checks showed that he had a possible broken hand. Footballers take note….

Once again, however, Montpelier, failed to take advantage of their possession and, a couple of minutes later, play turned again and, having missed a penalty in the 31st minute, van der Walt slotted home his third successful kick – awarded for a high tackle on WP Nel – for 9-0 about a minute later.

As the break approached, Montpelier were, once again, looking dangerous and with the pack hammering away at the home line, it was Jaques du Plessis who buried through for the, TMO approved, try. Pienaar knocked the conversion over and the sides went in at 9-7 to Edinburgh.

Montpelier were first on the score board in the second half as a 48th minute Pienaar penalty put the visitors ahead for the first time in the match at 10-9, before Edinburgh, once again, turned up the gas and put pressure back onto the visitors defence.

Yet another powerful run up the left wing from van der Merwe eventually lead to a turn over, but Pienaar could only make around 15 metres with his clearance, so the home side were still in the driving seat.

The resultant rucking and mauling along the French try line was illegally stopped at some point in the proceedings, so referee JP Doyle handed van der Walt the opportunity to take the lead back for Edinburgh, which the No. 10 duly did for 10-12.

By this time, the home side were beginning to dominate the match and as the hour mark drew near, Edinburgh were again knocking on the door of the visitors’ try line.

As the pack gradually worked their way from right to left, with several pick-and-drives holding the defence in close, a gap opened up on the right wing. Scrum half, Henry Pyrgos, feinted left for the pass, but delivered the ball to Darcy Graham on his right. The winger then had nothing better to do but to dive, unopposed, over the line for the try. Van der Walt then converted from near the touch line to take Edinburgh into a 19-10 lead, and, crucially, a two score lead with less than 20 minutes left to play.

The final 17 minutes of the match were to prove a touch nervy for the home support, but, despite Montpelier’s best efforts, they could make no real headway and the match finished with a penalty to Edinburgh, which a grateful Blair Kinghorn booted into the stand to seal another, tremendous, victory for Edinburgh against World-class opposition in this season’s European Champions Cup Rugby.

The win not only handed Edinburgh a home quarter-final, but ensured that Glasgow also qualified as a best runner up regardless of their result against Sale today (Saturday) making it the first time in ERCC history that both Scottish clubs have made it out of the pool rounds. What now for the Six Nations…?