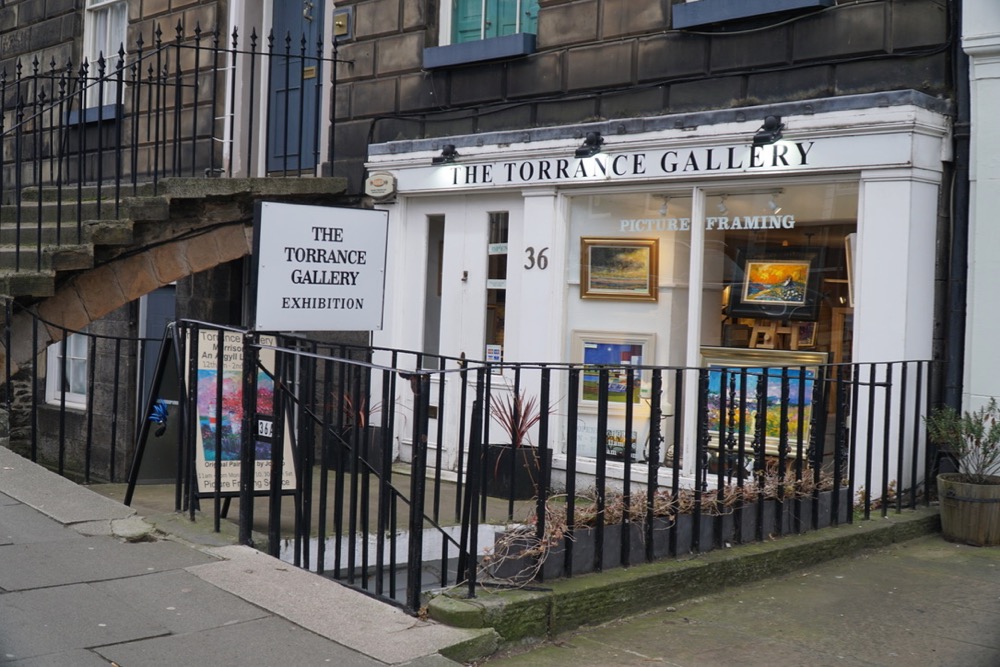 Dundas Street is well known as the street where the galleries are and where art lovers can be seen browsing on any day of the week to find the latest piece of art to hang on their walls. Brian Torrance has been owner of the Torrance Gallery for 49 years and feels it is now time for him and his wife Jo to put their feet up.

In mid March Fiona McCrindle of the Edinburgh Drawing School(EDS) will take over the ownership of the Torrance, bringing the various EDS outlets to three.

We spoke to Fiona amid a huge selection of Jolomo paintings at the Torrance which is the current exhibition there. I asked if this is the kind of exhibition we can continue to expect from the Torrance.

She replied: “Yes in the first instance I would like to keep the gallery running pretty much as is. Jolomo is probably the biggest name that shows here with a biennial show so hopefully in two years’ time we will be showing his work again.

“The ethos of the gallery is bright, friendly, colourful accessible art of a very high standard and I will be keeping that going.”

The timing was impeccable as Brian who has run the gallery for many years is now retiring.

The current EDS gallery is on Great King Street which is not on the main gallery street so Fiona regards this as a big improvement. She said : “Dundas Street is seen as the place to be. There are easily about 20 or so galleries on this street.”

The EDS was set up in 2012 and there is a studio on Great King Street and above Henderson’s in Thistle Street Lane. Within those two studios they run adults and children’s classes mostly for beginners. They offer a wide range of drawing and painting classes along with some design classes as well. They also offer tuition in calligraphy and illustration.

Torrance Gallery was set up by Brian and his parents in 1970 when they claim to have been the very first on the street. The name will continue and Fiona thinks that is very important. She said : “Everyone knows it and it would be daft to change it for no good reason.”

Fiona who is herself a professional artist explained she will be bringing in some new artists at that time too. She said : “Two fantastic female artists Nancy Turnbull and Alison Young will be shown alongside Ken Ferguson’s snowy scenes. I used to run a gallery for many years before the EDS and gallery.

“To be on Dundas Street is a major coup and this has just been serendipitous. This gallery fits very well with what I am already doing with my own gallery and it is a good progression for me. It will be busy but yes it is an ambition to be here.”