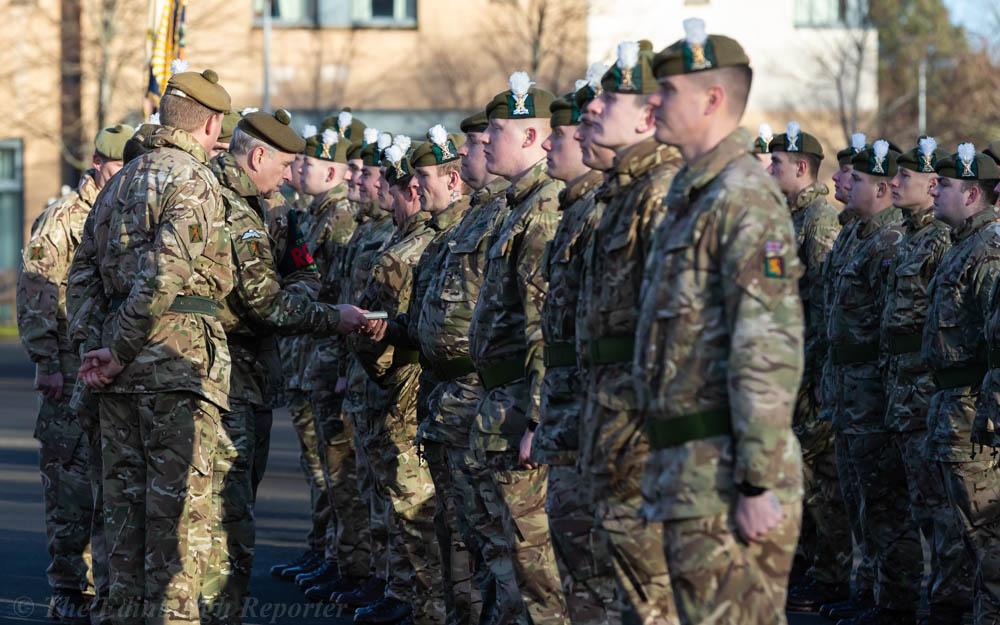 Earlier today (Thursday 17th January) at Glencorse Barracks in Penicuik, HRH The Duke of York KG presented Medals to 2nd Battalion, the Royal Regiment of Scotland (2 SCOTS) personnel who took part in an operational tour, OP SHADER, in Iraq in 2018.

Additional personnel from 2 SCOTS who participated in OP TOSCA (Cyprus) & Op TRENTON (South Sudan) were in attendance, as was Cpl. Cruachan IV (The Regimental Mascot) and the Battalion’s Pipes & Drums. The Royal Standard was also raised. HRH The Duke of York went on to meet Soldiers and Officers of 2 SCOTS.

2 SCOTS can trace its lineage back to 1678 and the raising of a Regiment by the Earl of Marr for service against the Covenanters. A union of two separate Regiments in 1959 (The Royal Scots Fusiliers and the Highland Light Infantry) formed the RHF (Royal Highland Fusiliers).

From 2006 to the present the Battalion is known formally as The Royal Highland Fusiliers, 2nd Battalion, The Royal Regiment of Scotland. 2 SCOTS draws its manpower predominantly from Glasgow and Ayrshire.

The Royal Regiment of Scotland (SCOTS) is the senior line infantry regiment and only Scottish infantry regiment of the British Army. It was formed on 28 March 2006 and founded on the fighting heritage of historic Scottish Infantry Regiments. Today, The Royal Regiment of Scotland consists of four regular and two reserve battalions, plus an incremental company, each formerly an individual regiment.

The regiment’s motto is Nemo Me Impune Lacessit (No One Assails Me With Impunity) — which is the motto of the Order of the Thistle, Scotland’s highest order of chivalry, and was also the motto of four of the pre-existing Scottish regiments.

The Regimental mascot, Cruachan IV, is a Shetland pony and took up his role in October 2012. The first Shetland pony mascot was presented to the Argyll and Sutherland Highlanders (one of the historic antecedent Regiments) in 1929 by HRH Princess Louise, Duchess of Argyll. The pony was named after Ben Cruachan, a mountain in the Argylls’ namesake lieutenancy, and the war cry of Clan Campbell, of whom the Duke of Argyll was chief.