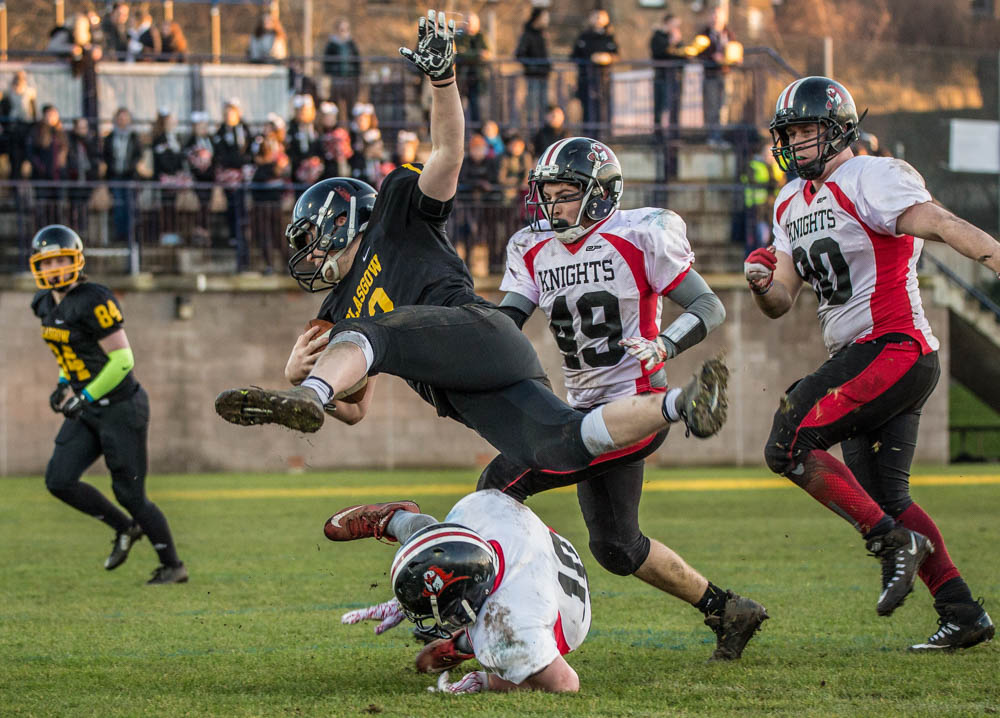 This, the 8th annual Varsity match, will be held at the capital’s Meggetland Stadium – which has hosted the event since 2012 – and will kick off at 2:30pm on Sunday, February 3rd.

The inter-city match – accompanied by a full programme of family entertainment – will see the teams compete for the MacKenzie’s Challenge Trophy.

Edinburgh Napier Knights’ Head Coach Pete Laird said: “We hope this year’s East-West game will contain just as many thrills and excitement that Gridiron fans have come to associate with this traditional pre-Super Bowl game.

“Sunday is the biggest day for exposure to American Football in the UK, and a fixture between ourselves and our Glasgow division rivals is sure to whet fans’ appetite for the Superbowl later in the day.

“Last year’s game attracted over a thousand supporters and we encourage Spectators to wear the Knights colours of Red & Black and to make as much noise as they possibly can.”

Entry to Meggetland is free for Under 16s and discounted for students, and entertainment will be provided by live music, a DJ and the Edinburgh Napier Panthers Cheer Squad. The university’s alumni association will host a VIP lounge, and the Knights’ youth team, aged 11 to 16, will also be playing prior to the game.

Gates open from 1pm in advance of the 2.30pm kick-off, and fans will be able to enjoy hot food, a barbeque and drinks at the clubhouse bar. Tickets are £5 for an adult and £3 for students with FREE ENTRY for Under 16’s, and can be purchased in advance or on the gate.

Match tickets also include entry to the Knights’ Super Bowl party at the Three Sisters bar in the capital’s Cowgate from 8pm on Sunday (over 18’s). This year’s game features the New England Patriots taking on the L.A. Rams in Super Bowl LIII.