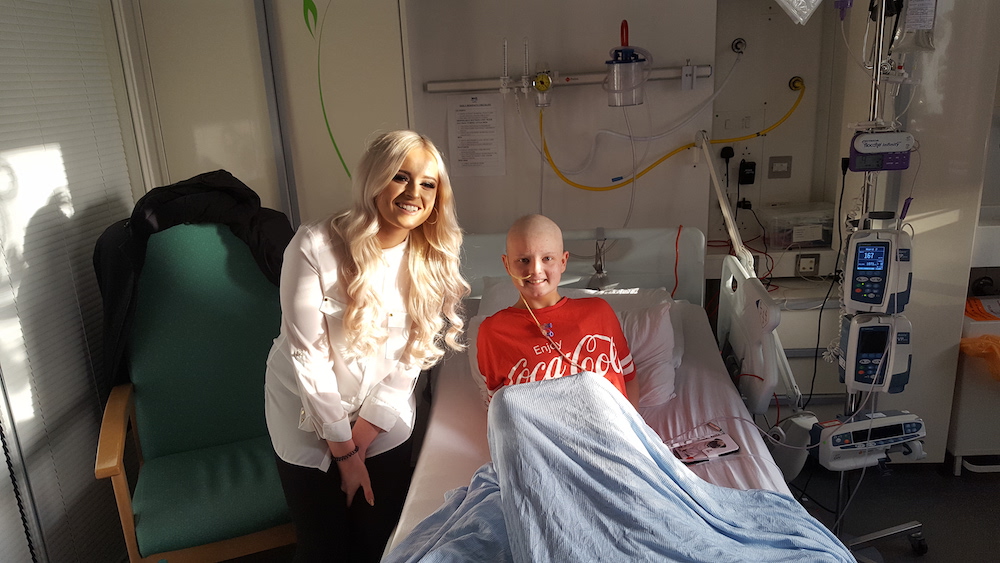 A SCOTTISH celebrity gave children in hospital a musical surprise this Christmas after being revealed in a living advent calendar at the Royal Hospital for Sick Children (RHSC).

ECHC is bringing an advent calendar to life in the RHSC, opening a different door in the hospital each day, from 1-24 December, with something special behind each to ensure that children and young people don’t miss out on this magical time of year.

From visits from the Scottish Ballet to the Hearts and Hibs football teams, ECHC is creating something memorable and entertaining over the festive period for children in hospital.

Caitlyn from Tranent, East Lothian, rose to fame in 2016 after her performances on the X Factor that went viral, being viewed by tens of millions online.

The singer-songwriter said: “I was in and out of the RHSC lots as a child for all my bumps and bruises and I know exactly how it felt being young and away from home so, I’m keen to do what I can to bring joy and fun to the kids in the run-up to Christmas.

“There are some big X Factor fans in the hospital so it was great to see their faces when I was revealed behind the advent calendar door.”

ECHC is asking businesses across the city to sponsor one of the 24 living advent calendar doors and support the campaign that will help transform Christmas at the RHSC.

Amy Ford, Corporate Fundraiser at ECHC, said: “Music is such a big part of the Christmas cheer, so having Caitlyn come and perform was just magical.

“Our Big Christmas Door Appeal is about providing festive fun and joy for children and young people and their families who will spend the Christmas period in hospital so that they can be a child first and patient second.”

Caitlyn was recently featured on the single, ‘Break Your Heart’ by BAMR which reached number 15 in the UK ITunes chart and number 2 in Official Scottish music charts.

She also had success with her own song ‘I’m Sorry’ which reached number 3 in the iTunes Country Chart followed and had a number one music video.

ECHC believe that nothing should get in the way of being a child and exist to transform the experiences of children and young people in hospital.

The charity works to make sure that children and young people’s lives are less interrupted by illness. It distributes around £1.5 million per year in support of the work of the RHSC and other children’s healthcare settings across Scotland.

For information on how your business can sponsor a door, volunteer or raise money, please contact Amy Ford on 0131 668 4949 or amy.ford@echcharity.org.