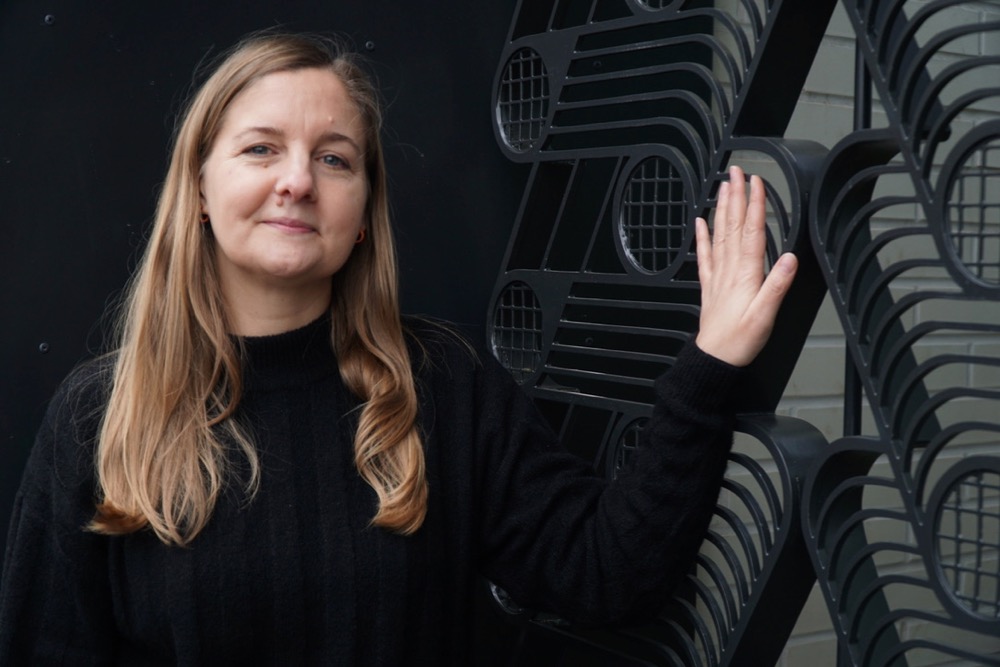 Edinburgh Printmakers will soon have a new building in Spring 2019. The former North British Rubber Company HQ has been transformed into a state of the art centre for the arts charity.

It was originally due to open this year, but believe us – when you see it, it will be worth waiting for.

Now there are three sets of lovely new gates installed on Dundee Street to shield the glass doors and make the building secure. The 2.5 metre high bi-folding gates were designed by artist Rachel Duckhouse who worked with Sculpture and Design Ltd based in Glasgow who made and installed them.

We met with Rachel just as the final touches were being put to the beautiful gates which are made from laser cut steel, galvanised and powder coated.

The inspiration for the design came from the history of the building. Rachel explained : “The brief was all about looking at the heritage of this amazing building which used to be part of the massive North British Rubber Company site. So there was a whole bunch of factory workers here making things out of rubber. I went to the archive and there’s a whole load of amazing bits and pieces in the archive including blueprints of the way all the machinery was laid out on the factory floor, illustrations and product catalogues – a whole bunch of stuff!

“The most amazing thing that I realised quite early on was there were these lovely illustrations of the factory workers working next to these big machines called calenders. The calender is a machine that has these beautiful big rollers that compress the raw rubber and send it through, turning it into sheets. As soon as I saw that I thought ah that is like a print workshop! Printmakers use presses which are these rollers which you send your paper through the blanket to create your print whether it’s relief printing or etching. So when I made that connection between the rollers, the production of the old rubber factory and the rollers and presses of the printmakers I realised that was my motif for my design.

“Then I configured it on paper over a few weeks. I just wanted to capture the flow and the movement and the repetitive nature of the production in both.

“I am delighted with them. I had to draw them first and then working with Sculpture and Design we worked out how to make them really strong and robust. So with them I moved the project from paper to something working.”

We visited @EdinburghPrints today at their soon to be new home on Dundee Street where @RachelDuckhouse has designed the massive new gates Here she tells us about them pic.twitter.com/FDS3XSjp6A