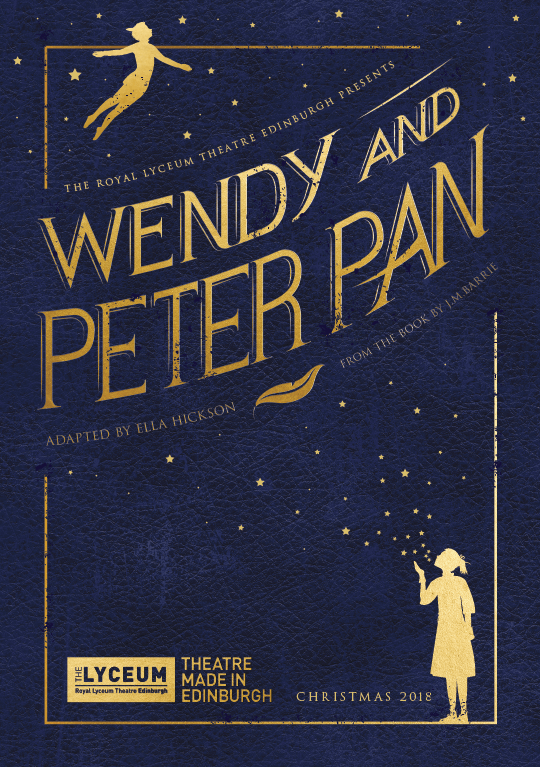 Is Wendy & Peter Pan a fast-moving adventure story or a reflection on age, grief, gender-stereotyping, the meaning of family and of love? In Ella Hickson’s brilliant adaptation of JM Barrie’s book it is all of these things and more. Women are empowered, men are freed from their emotional straitjackets, and while at the beginning it is not only Pan’s boys who are lost, by the time the final curtain falls, many people have found their way again.

The play opens in the Darling family’s Edwardian nursery.  Despite having a perfectly good mother of her own, Wendy has already taken on the maternal role for her three battle-mad brothers – but there are already hints that she’s not enjoying it. When she wants to join in the game, oldest brother John tells her that ‘girls can only be damsels; they start off scared and end up grateful.’ No wonder she goes back to fussing about the laundry.

Then younger brother Tom dies, an event movingly portrayed by the arrival of Dorian Simpson’s Dr Giles, his steps funereal, his suit black. He is followed by Pan and his friends, who carry the boy away. No words are spoken. The family is torn apart by grief, and Wendy, struggling with unfounded guilt, frantically tries to ‘care’ more and more in an effort to make everything right again.

And what a transformation it is. Wendy battles her way through Neverland, ably dealing with murderous pirates, mouthy fairies, and Peter Pan himself, in her desperation to find Tom, her own lost boy. On the way she encounters a very different version of Tinkerbell (Sally Reid, an hilariously feisty Glaswegian Tink), Bonnie Baddoo’s sad, determined loner Tiger Lily – who has also lost her own ‘proud, beautiful’ family to Hook’s crew, Gyuri Sarossy’s excellent Captain Hook – here a South London gangster type who’s past his sell-by-date and knows it – and Dorian Simpson’s wonderful Smee, groovy dancer and Hook’s second-in-command, determined to do his best for his boss and always ready to lift him out of his mid-life crisis gloom with talk of country cottages and gardening (‘It’s not time for a pity party – it’s time for a pina colada!’)

There are lots of jokes, both verbal and visual (including a quirky new interpretation of Pooh Sticks, which had the younger members of the audience in fits) and lots of battles (the only point at which the show dragged a bit was in the second half, when one began to feel battle-weary to say the least – this company loves its sword fights maybe a little too much), but there are also moments of great poignancy. Peter and the Lost Boys want a mother more than anything – they want Wendy to fill that role, but just as Peter doesn’t want to grow up, so Wendy realises she has to live her own life (‘Why is it always my job? I want to have some fun!’) . Hook wants her to join the pirate crew – but he wants her to do that in a green party frock, one that she is soon hitching up round her waist as she escapes with Tiger Lily – ‘I’ve had enough of playing nice.’

And above all, there is a sense of time passing. For Wendy and her family, time brings healing. Once she knows what has happened to Tom, she is able to bring her brothers back to Bloomsbury, and bring happiness back to the Darling family (their mother is even going to get a job). For Captain Hook, the tick tock of the clock not only heralds the arrival of his arch enemy, the crocodile (and oh yes, he makes a cameo appearance too); it also reminds him that he is not the young buck he once was. Peter is determined to stop time, at least for him and his Lost Boys; instead they will play together in Neverland for ever. He may not have to ‘be grown up and never have fun again’, but deep down he now knows far more than any child. He’s a sensitive soul who has decided to bury his own feelings, and his devil-may-care exterior hides a lonely, damaged heart. As Hook observes, there is some suffering behind that innocent mask. The real sadness in this story is Peter’s; he is unable to move on, whereas Wendy has not only learned how to deal with her grief but also how to grab life by the horns and truly live it.

Ziggy Heath (Pan) and Isobel McArthur (Wendy), both of whom give exceptional, nuanced performances, are undoubtedly the stars of this excellent show, but the entire cast is top notch. Max Johns has designed wonderful sets, from the patchwork-quilted bedroom to the underground world of Neverland, complete with old baths, building blocks – and a curtain of that very same patchwork. The costumes produced by the Lyceum’s own workshop really add to the visual impact. Tink’s blingy leggings and Doc Martens are the perfect complement to her character, and when Wendy decides to play nasty, out goes the flannelette nightie and in come the dungarees and turban. Nobody’s going to mess with her any more.

Wendy and Peter Pan is a standout Christmas show for everyone, from people who want to ponder on the inherent tragedies of life to those who simply enjoy watching a pirate getting a party on.

Wendy and Peter Pan is at The Lyceum Theatre, Grindlay Street, Edinburgh until 5 January 2019. There are no performances on 25 December or 1 January. Tickets may be purchased from the Box Office on 0131 248 2828 or online here.