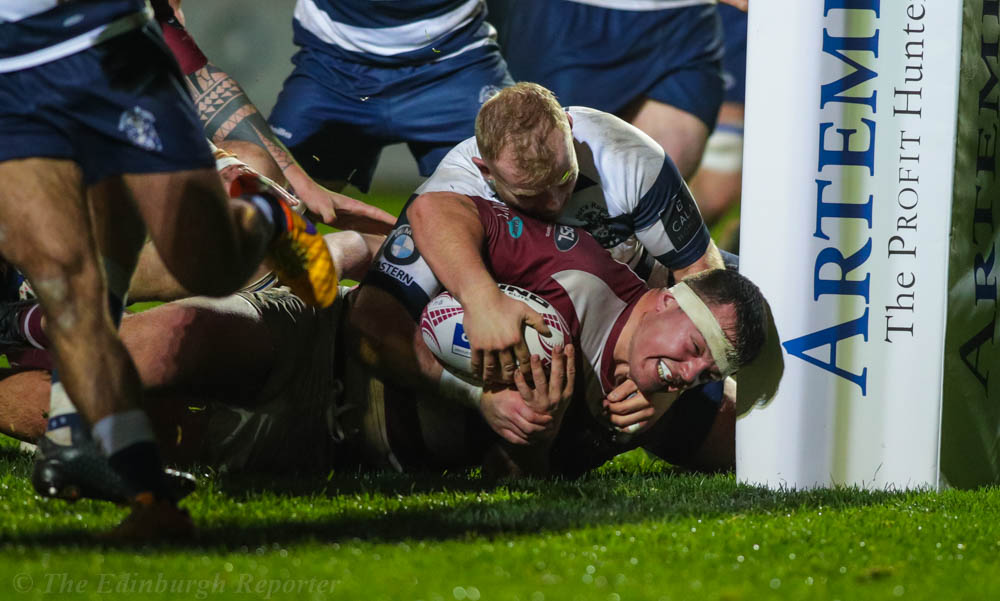 Heriots made the trip ‘South’ from Goldenacre to face Watsonians under the lights at Myreside on Friday night. With the home side lying two places below their visitors in the Tennent’s Premiership, ‘Sonians were looking to close the gap to the top three with a win.

Quickly recovering possession from the kick of, the visiting side set to and drove into the home half, but the defence held and the ball was cleared upfield. Watsonians then took their opportunity to set up a counter, and, with Edinburgh Rugby’s Nathan Fowles in the driving seat, they were soon inside Heriots 22.

Using their pack to try and wear down the defence, they were held out, but a kick through under advantage was touched down by Heriots, thus bringing play back for a penalty in front of the posts. Stand off, Lee Millar – allegedly seeking Watsonians version of the ‘Golden Boot’ – stepped up and slotted home the first points of the evening for 3-0 after about seven minutes.

For the next 12 or 13 minutes, Watsonians barely saw the ball, never mind touched it as Heriots returned to the attack.

They came within a few metres of the home try line several times, winning a couple of penalties on the way, but despite the pressure, the ‘Sonians line held and, they eventually cleared to gain bit of breathing space.

Then home side regained possession and quickly made ground into opposition territory. A, more-or-less, repeat scenario then played out, but failing to get quite as close in this time, the ball was slung back to Millar on the edge of the 22 and the No. 10 duly obliged with a successful drop goal for 6-0.

The remainder of the half was fairly even, with Heriots possibly winning the possession battle, but other than a missed penalty from Millar, scoring was not on the cards and the sides went in for the break at 6-0.

The start of the second half was very much like the end of the first, with the match fairly even, but the home side gradually got on top of their Northern Edinburgh rivals and pinned them back in their 22.

The back division got themselves more involved this time and the odd missed tackle had the home fans looking for a score. However, the score came the way of the front row, or more specifically, Jack Stanley, who received the final pass in the sequence about five metres out and dragged, what appeared to be – and probably was in the bar later – half the Heriots team with him to the line. He was pulled down short, but managed to ‘reach out’ and place the ball on the line for a try under the sticks and 11-0. Millar then knocked the conversion over for 13-0 with still 25 minutes of the match to play.

A few minutes later, Millar scored another penalty for 16-0, and the match, in contrast to the first half, was now being mostly played in Heriots half. Waiting until very late in the match to put on any subs, Watsonians were gradually pushed back by the visitors until with the final whistle in sight, a couple of yellow cards for the home side saw them under immense pressure on their line.

They managed to hold out for a couple of minutes but, with the final play announced – a penalty scrum out in front – it was almost inevitable that Heriots would score. However, that inevitability was tested when, instead of passing wide, they lost the ball to a turnover.

‘Game over!’ they all thought, but no… The ‘clearance’ went straight up into the air and back into opposition hands. Taking charge of proceedings from there, Heriots’ stand off, Dom Martin, lobbed the ball out to the wing where it was almost plucked out of the air by Watsonians’ Angus Guthrie, but he just missed it and his opposite number, Craig Robertson, picked up the bobbling ball and dived over in the corner.

Martin then just missed the touchline conversion and the game was ended with a 16-5 home win and, unless Currie Chieftains win their match against Ayr, fourth place in the Premiership table.