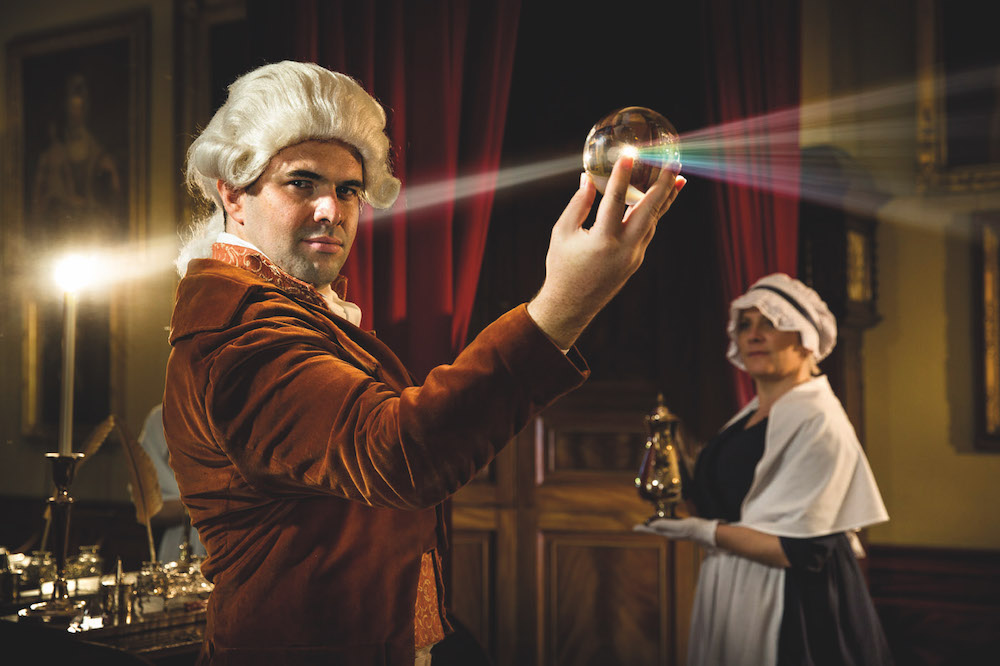 Nicola Sturgeon had better watch out – her neighbours are listening to her conversations through the wall with the aid of a crystal glass. Yes, the inhabitants of The Georgian House on Charlotte Square are definitely snooping on what the First Minister is up to. However they are confused, particularly about the fact that our highest ranking politician is a woman. (and the fact that so much of the conversation appears to concern fish…)

The confusion arises mainly from the fact that the two men seated at the dining table are those Scottish Enlightenment collaborators, Hume and Smith, eating venison with an abundance of  claret to accompany it, and debating weighty matters.

The play does not shrink from politics, particularly Brexit and the economics both from the 18th century and what Adam Smith believes he may have foretold in his magnum opus, The Wealth of Nations.

It is magnificently set in The National Trust’s The Georgian House on Charlotte Square where it processes through some of the rooms.  In the kitchen you are offered hot chocolate, and a wee piece of tablet sweetens the whole occasion at the end.

Last year at Edinburgh’s Hogmanay Val McDermid brought author Susan Ferrier to our attention during Message from the Skies. This play continues to tell more of Ferrier’s story.

The Scottish novelist whose work was more popular than Austen in her day, had been a bit forgotten. Here, we witness Susan Ferrier speaking up for women’s rights through a metamorphosis into an amazing Lady Juliana. I must give Nicola Roy a special mention – playing four characters is not easy, but she appeared at each turn and we greeted her as if we had never seen her before. (Her previous starring role as Fiona Fan in the Scottish Power TV ads only goes to show the breadth of her vocal ability!)

Enlightenment House is engaging (literally – beware if you stand near the front at any time….) well-written and very well acted. Writer and Director Ben Harrison has an honourable pedigree of course as Artistic Director at site-based Grid Iron where he has directed 27 of the company’s award-winning productions.

I cannot recommend this highly enough to you as the alternative Christmas entertainment. There is not a teeny bit of tinsel, or one mention of Santa, but there is plenty to choose from in the gift shop which is opened specially as the ‘curtain’ falls (and you get a 20% discount).

Enlightenment House will run from 14 November until 5 January at the Georgian House, with five shows a day. Tickets for can be purchased online at www.nts.org.uk/visit/events/enlightenment-house-a-play-in-five-rooms