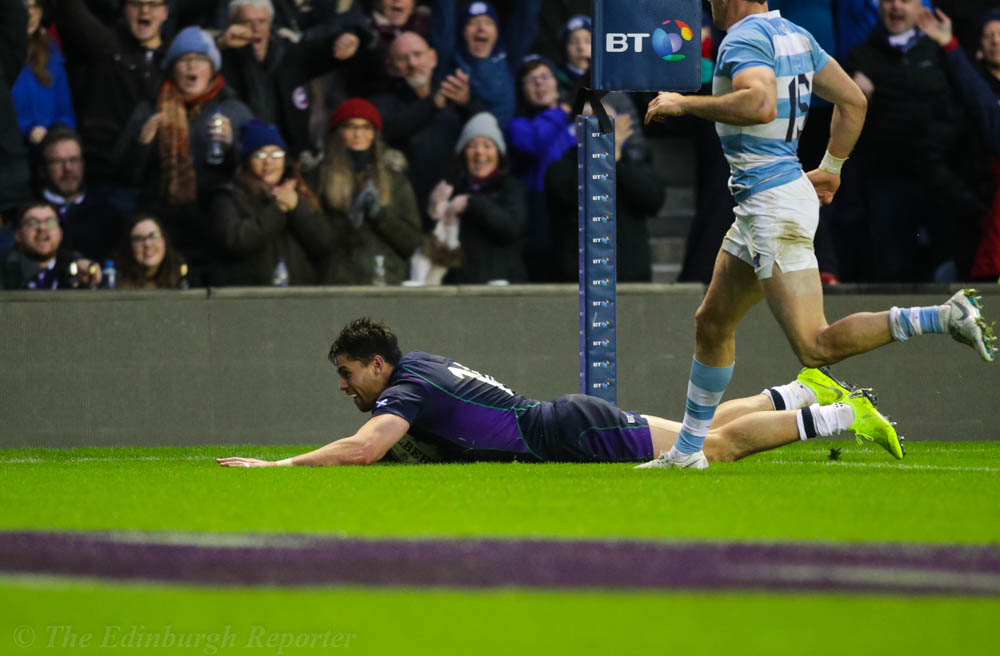 Scotland’s fourth, and final, match of their 2018 Autumn International Series was played at a damp and miserable BT Murrayfield in front of a full house of damp, and maybe, not quite so miserable, supporters who were served up, what looked like, an end-of-term damp and miserable match.

With the rain falling steadily, the match kicked of the usual BT Murrayfield wall of noise, which ramped up a degree when Greig Laidlaw kicked Scotland into an early lead with a penalty for 3-0.

A few minutes later, Argentina had the chance to equalise when a ruck infringement drew the referee’s attention, but the, ever reliable Nicolas Sanchez pulled the easy kick wide, thus setting the bench mark for the visitor’s kicking record by the final whistle.

The match became mired in a forwards’ battle for around 10 minutes, largely confined to Scotland’s half, but neither side could make much in the way of a threat on their opposite number’s line. At least until a clearance from stand-off, Adam Hastings, was charged down inside the 22, but the No. 10 was quick on his feet and got back to ground the ball for a 22 drop out.

The Scots then had a go at breaking down the opposition defence, but were easily held out and the pressure returned with interest.

Argentina gradually worked their way towards the home 22 with a great deal of hard running from their pack, using a fair degree of offloading skill in their march forward, and forcing the Scots to make a lot of important tackles. Another penalty for Argentina during this time went awry as 15, Emiliano Boffelli pulled his kick left of the upright.

The break almost came around the 20 minute mark, but the grubber through into the goal area was just reached first by Huw Jones with the opposition breathing down his neck.

All-in-all, the match was looking to be swinging in the opposition direction and their pressure eventually lead to Sanchez finding his range and slotting home a 28th minute penalty to draw the sides level.

Scotland then came back into the match with some sustained pressure of their own, leading to another successful penalty from Laidlaw for 6-3, but the match was still up for grabs and with a lot the remaining time spent in Scotland’s area of the field, it was a bit of relief all round when the half time whistle went with the score still at 6-3.

There must be something about the North end of BT Murrayfield as the first 10 minutes or so were mostly played at that end.

Relief for the visitors came early, however, as Sanchez levelled for 6-6 on 42 minutes following a brief break out, but Scotland were holding their ground after the restarts and putting pressure on the opposition defence. Another long-range attempt from Sanchez went miles wide, but the intent was there for all to see.

Laidlaw pulled the home side three points clear for 9-6 with another penalty on 55 minutes, but the match was becoming a bit bogged down with neither side, apparently, sure how to break down the opposition defence.

It was to be another 10 minutes of the match before the first try was on the board, thankfully, for the home side.

With the ball in hand, Scotland’s backs came into their own and made a few holes in the line, drawing in the defence to fill the gaps. From a ruck around the edge of the 22, Laidlaw feigned to go left, fooling the defence into covering, but he then changed the direction of play to Hogg, who fed Sean Maitland out wide on the line. Maitland then found himself with a virtually free run to the line, sliding in the final few metres to notch up his 11th try for the home side. Laidlaw then blotted his copy-book by hitting the bar, but, with just over 10 minutes left, it was 14-6 to the home side.

Argentina then had to endure another penalty miss from Sanchez, before a line break almost saw them through, but a last-ditch tackle resulted in the slimy ball being lost forward.

Sanchez eventually scored on 74 minutes for 14-9 but, apart from a fine break down the line from sub, Byron McGuigan – which lead up to another Laidlaw missed kick at goal – the match was all but over.

The final couple of minutes were spent in and around the visitors’ 5-metre area and the match was summed up in the end as a dropped ball in over time ended a fairly turgid encounter.