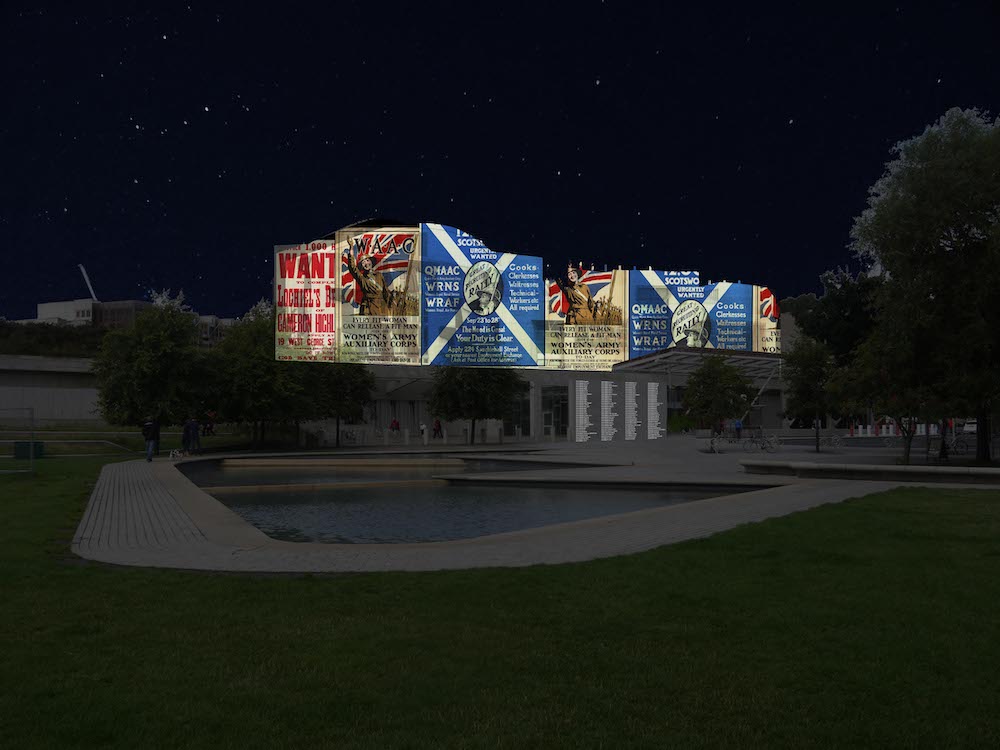 Holyrood will play its part in remembering those who died in World War One by projecting their names onto the Scottish Parliament building on 11 November. This will mark the centenary of the end of the war.

You can go along on the evening of Remembrance Sunday to view the illuminations honouring the 134,712 men and women who are listed in the Scottish National War Memorial Roll of Honour.

The names will not only be of service personnel, but will include nurses, munitions factory workers, members of the Merchant Navy and overseas servicemen who fought for Scotland.

The projections will last for seven hours, perhaps giving an idea of the scale of the loss and sacrifice made by that generation. There will be music and images with performances by Scottish pipers. At Midnight a piper will play the Last Post.

The installation is called THEIR NAME LIVETH and is a partnership among The Scottish Parliament, the Scottish National War Memorial and The Royal Edinburgh Military Tattoo.

The Presiding Officer, the Rt. Hon. Ken Macintosh MSP said: “This illumination will be a poignant tribute to all those who died and a powerful reminder to us today of their sacrifice.

“It is the centrepiece of the Parliament’s plans to commemorate the 100th anniversary of the end of World War I and I hope as many people as possible will join us on Armistice Day to view what will be a truly unique illumination.

“The fact it will take 7 hours to project the names of all those who died reflects the sheer scale of the loss and the devastation the war had on communities right across Scotland.

“This has been a remarkable project and I would like to thank our partners The Royal Edinburgh Military Tattoo and the Scottish National War Memorial for their help in making it happen.”

“Ross Ashton and his team work with us every year and have created beautiful and innovative projections for our show. He has worked with our armed forces for many years and will, we know, respectfully memorialise the many men and women who lost their lives during the war.

“This event is hugely important and will help us to reflect upon all we’ve learned over the past century, and in particular these previous four years. We would encourage as many people as possible to join us at The Parliament and pay their own personal tribute.”

Lt Col Colin McGrory, the Secretary to the Trustees of the Scottish National War Memorial, said: “The Trustees were delighted to be asked to contribute to what will be a stunning tribute to the approximately 140,000 Scottish men and women who died in the First World War.

“The team of artists and builders that constructed the Memorial from 1924 to 1927 included many veterans of the War who were fortunate enough to return home. Behind every name projected onto the Parliament on 11 November 2018 is a story of a son, a daughter, a father, a husband. 100 years on, it is our duty and honour to remember them and what they gave their lives for. Lest We Forget.”