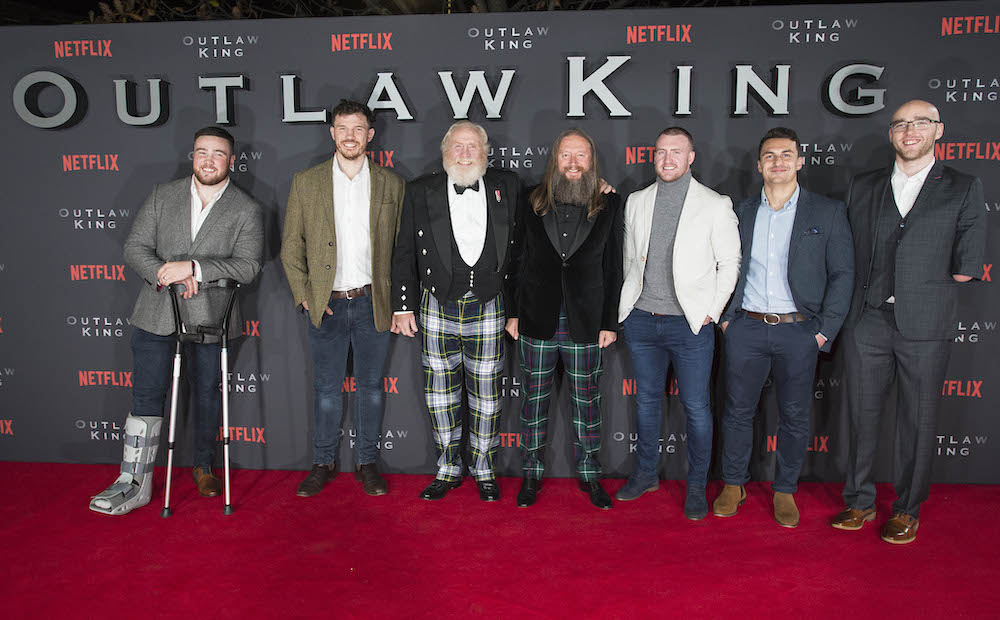 Outlaw King tells the untold, true story of Robert the Bruce who changes from defeated nobleman to outlaw hero during Edward I’s occupation of Scotland.

Despite grave consequences, Robert seizes the Scottish crown and rallies an impassioned group of men to fight back against tyranny.

It was filmed in Scotland with some financial support from Creative Scotland, using locations such as Linlithgow Palace and Craigmillar Castle.  The film reunites director David Mackenzie (Hell or High Water) with star Chris Pine alongside Aaron Taylor-Johnson, Florence Pugh and Billy Howle.

Chris Pine plays the leading role of Robert the Bruce. Latterly Captain Kirk on the Star Trek remake, it seemed he just needed a bit of hair and a beard to look the part.

I asked if Bruce was a complex character to portray. Pine agreed that indeed he was.

He explained : “Yes he was, just like any human being tends to be. He seemed to be ever more so because he achieved so many great things. I wanted to find out specifically what drove him, but failed to do so even after all the research and speaking to historians. I don’t think I know him much better even now.

“He is continually a nebulous fellow in my mind, and I think that most of the stories would agree to disagree. Some say that he was a modern politician, a very scheming Machiavellian mind who was biding his time after the death of Wallace for the correct time to strike the British.

“There is other evidence that he supported the English at many times, but for instance he would send troops and the troops would never show up. He would send physical support and they would somehow get lost  He seems to me to be a very tricky fellow.

“I can’t speak for him because I don’t know him and there’s not enough written about him, but I think he was a man who was bred of a certain class that believed he deserved to be king. That was the time when if you were born of a certain class God gave you a right. That’s not a judgement, that is just what it was back then.

“I also probably believe that like some great leaders he had a selfless part of him that did want to free his land from tyranny. Like all men he’s no saint I’m sure, but complex and beautifully human like the rest of us.”

“It feels like it is important to tell the real story of Robert, as closely as you can. That is what we tried to do.

“The film has very detailed costumes and representation of medieval life and the feudal system. While we were trying to be a bit closer to the reality, it is still a film of course and tries to be entertaining. I feel it is my duty to serve the character of Robert the Bruce as well as possible.

“We were very lucky as we got to shoot during my favourite period from late summer into early winter with the strangled light of autumn which is a huge part of the film and gives it a real quality. I feel like I have spent all my entire adult life location scouting for this film. I am glad to have shot it here and to be showing it in Edinburgh.”

Aaron Taylor Johnson is James Douglas, but you will perhaps know him from Kick-Ass or Nowhere Boy. He told us that he loved the Highlands which he said was his favourite location. It was quite romantic to ride a horse across the heather wearing chain mail and carrying a sword. He said : “It felt like we really channelled that era. It was pretty spectacular.

“We trained for about a month and a half on horses and sword training. It was a really good time to bond as brothers. It is very nostalgic to be back in Scotland and to show the movie here with the First Minister – she’s a wonderful woman!”

Tony Curran who plays Angus Macdonald who was a close kinsman of Robert the Bruce who  fought with him at the Battle of Loudon Hill and at Bannockburn in 1314, just seven years later. He said : “He was a Lord in his own right. He was a Lord of the Isles, a sort of king in his own right of the lands of Macdonald. That clan is arguably the largest of the Scottish clans. He was a very compassionate down to earth individual, or that is the interpretation that I came up with working with David Mackenzie. There are so many different elements in this film, so many different characters in this film, but I think Angus brings a bit of levity and level headedness to a man who has got some difficult decisions to make. Bruce had lands in England and Scotland and he gives them all up for the integrity of himself, his country and his people.”

I asked if he felt very proud to be Scottish after making the film. He replied : “Oh yes and it makes me very proud to be here tonight as well. There is of course the Scotland and England thing in this film, but there are many other universal themes in the film that touch us as human beings, rather than just people on each side of a common border.”

Tony told us he had never been to Edinburgh Castle before and he was quite delightfully natural and excited about having just met the First Minister there.

James Cosmo is Bruce senior or Robert VI de Brus in the film. Well known for his roles in Braveheart and in the Game of Throne, this is a part which probably suits him magnificently. “I just play Robert the Bruce’s Dad, quite a political character. He was a lifelong friend of Edward’s, and then Edward turns on the family eventually.

“It is a wonderful part. That whole period of Scottish history is absolutely fascinating.It is wonderful and written in such broad strokes with the political intrigue, the appallingly violent life that they led. Yet they were well educated, well mannered people. It is extraordinary. I just did a bit of horse riding. they were scared to let me loose with my sword again.

“We have such a plethora of locations in this country. We have shown the international filming community that if they come to Scotland they have a choice of so many wondrerful looking places.”

Josie O’Brien who is ten and from Edinburgh plays Robert the Bruce’s daughter, Marjorie in the film. Josie attends Strange Town Theatre here in the capital and told us that it is her dream to be an actress. Well she has certainly cracked that at an early age as she is one of the main characters in the film. As a result of her tender years however she did not get to watch the actual premiere with the other actors. She told us : “The adults are staying here to watch it, and we are going to the Balmoral to watch it   – but without the scary bits.”

Chris Fulton plays Euan Bruce. The Castle Douglas born actor went to school in Scotland, but admitted he had never been on Skye before where some of the filming took place. He said he was impressed with the incredible weather they enjoyed during the three and a half months of shooting. He said he was ‘super proud’ that the premiere was here in Edinburgh.

The First Minister had hosted the cast and crew at Edinburgh Castle ahead of the premiere and joined them on the red carpet to go and see the film. Her review afterwards was short and sweet :

Wonderful Scottish premiere tonight of @OutlawKing, the story of Robert the Bruce. A brilliant production and great showcase for Scottish film talent. Congrats to cast and crew & a special well done to Chris Pine on a stunning performance as Bruce (and a great Scottish accent!)