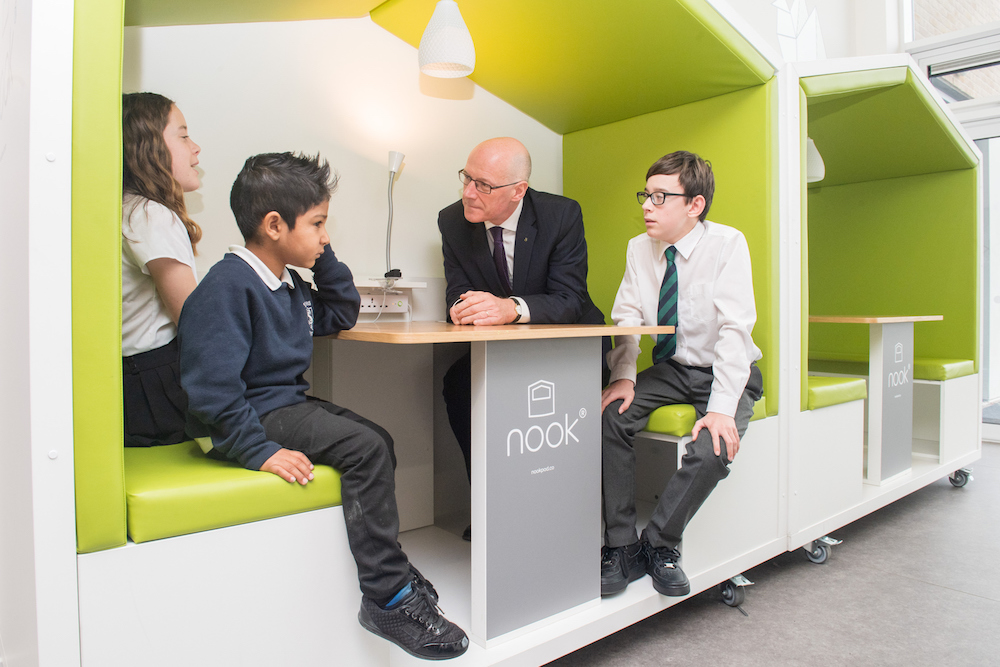 Mr Swinney was accompanied by Councillor Alison Dickie, Vice Convener for Education, Children and Families at the City of Edinburgh Council at the official opening of St John’s RC Primary School in Portobello.

Barbara Service was special guest of honour at the event. Mrs Service who retired as head teacher last week, bringing to a close a unique 55 year association with the school as a pupil, teacher, parent and finally head teacher.

The two-stream primary school has a flexible design with both formal and informal teaching areas for each year group and bright open spaces to maximise learning. A nursery offering 40 morning/40 afternoon places forms part of the building and nursery provision for 2-year-olds is due to open in the near future. The school also has an astroturf pitch which can be used by the local community outside school hours.

Cllr Dickie said: “It was great to see the excited faces of the pupils this morning as we officially opened this fantastic school. As a former teacher I know how important it is to embrace innovative ways of improving the learning environment and ensuring that new schools are designed to be inclusive for all pupils.

“St John’s definitely ticks all the boxes with its sensory room, quite nooks in classrooms, breakout spaces and a variety of different furniture to support varying learning styles and learner needs within the school. When pupils are comfortable and happy within these spaces, they will want to engage even more in the amazing learning that is already taking place, which is everyone’s end goal.

“Our £10m investment in the new St John’s demonstrates the Council’s commitment to creating a first class education estate and ensuring all our children have the best possible learning environment in which to flourish.”

Deputy First Minister John Swinney said: “I would like to thank the City of Edinburgh Council for inviting me to officially open the new St John’s Primary School.

“It is a fantastic facility which the entire school community can be proud of and I am pleased that the Scottish Government was able to provide more than £5 million of funding towards its construction as part of our £1.8 billion Schools for the Future programme.

“I wish the school, and everybody in it, all the very best for the future.”

Retired Head Teacher Barbara Service said: “I’m delighted that I was able to see all the pupils and staff successfully move into this fantastic building before I left. Space was an enormous challenge in our old school but now there is the opportunity for more flexibility for teaching and learning, meaning far better opportunities for the pupils to learn in co-operative and innovative ways. The school is embracing 21st Century education, in this purpose-built flagship facility.

“Parental engagement is a key priority so the school will be able to do this more readily in the new environment and the feedback from parents, carers and the community has been extremely positive.”