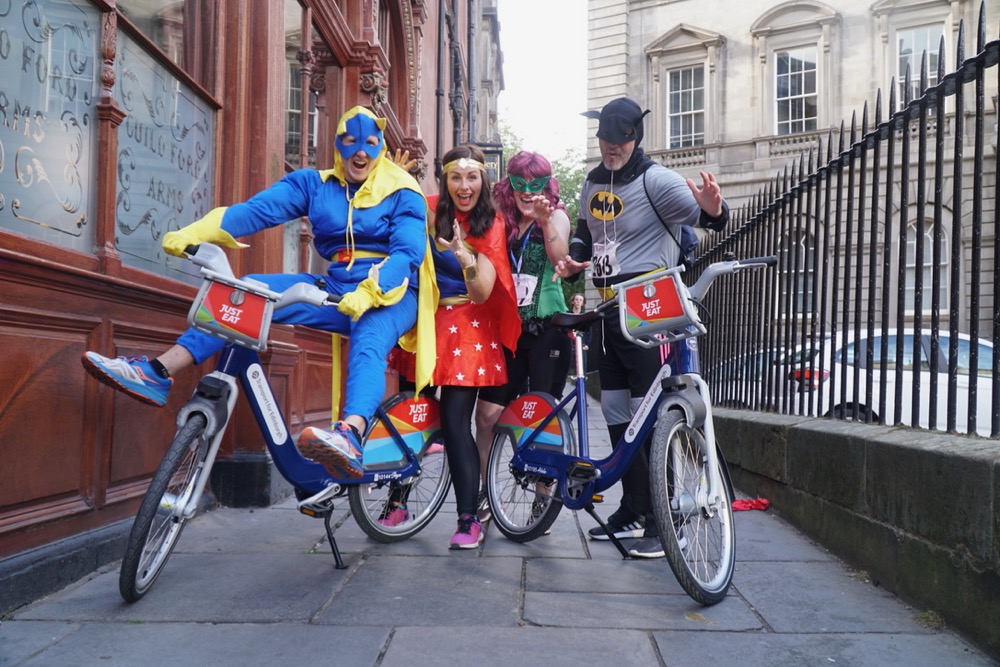 Ahead of the official launch with Mark Beaumont and the Council Leader, keen cyclist Adam McVey on Monday 17 September, we took the very first two branded Just Eat bikes out on the road yesterday lunchtime. What fun it was!

The bikes are very easy to use with three gears, which we have been told are specially calibrated for the Edinburgh hills. Certainly it’s been a while since I had my own bike out this year, but we managed to go all the way from Leith to the City Chambers without too much trouble.

The seats and the handlebars are really comfortable , and the bikes are not just as heavy as the  It was a gorgeous day with a little shower or two in between when we took the bikes for a sightseeing trip around the city.

My bike was called Skye and my colleague was given Adele. There are 200 bikes ready and waiting to go out on the streets on Monday morning by which time the app will be uploaded to the App Store and Google Play.

My friend and I have already tried bikes in Washington DC and in London where the actual frames are much heavier and the cycles a bit unwieldy. These bikes custom made by Pashley are cobalt blue with the Just Eat branding on the back wheel and are quite lovely. You will find that the Edinburgh Just Eat Cycles are very forgiving even for the casual cyclist, and quite manoeuvrable. First we headed through Leith Links on the off road cycle path to get the feel of the bikes, then headed up Leith Walk where we got a few waves from members of the public.

Our high point came when we met the legal team from Aberdeen Standard Investments who had just come back from Arthur’s Seat after a charity 5K. They were very happy to pose for us in costume and are delighted to know that there is a station near their office in St Andrew Square.

If they need to get to their other office at Lothian Road they might have to stop short for now as there is only a station at Chalmers Street near them. Other stations will open soon, but meantime the cycle hire scheme in common with others across the world work best for short hires, and are intended to supplement public transport. You can hire the bikes at any time of the day or night and the crew behind the scheme will ensure that bikes are moved around the city to ensure that there are always cycles for hire at every stop. The bikes will also be given some TLC when they need it.

With a council which supports an Active Travel policy this is a great addition to the mix of travel methods to get around town, and one I have been excited about.

The council has signed an agreement with Serco and Just Eat so that there should be no further public expense in relation to the scheme. And within a short time there will be electric bikes on the streets too for those who need a little extra assistance to get up the Mound. We stopped at Candersons on Leith Walk to say hi to Debbie who stocks our monthly newspaper for us. She loves the idea of the bikes. At present the nearest bike stations are one on Elm Row and another at The Scottish Government building at Victoria Quay. For the First Minister and her cabinet colleagues it will be easy to pick up a bike in Charlotte Square and drop it off at Victoria Quay. Downhill all the way there is little excuse not to use the bikes if you are able to.

We popped in to the Balmoral where the concierge welcomed us, but restrained himself from getting on the bike as he wears a bespoke kilt. (This doesn’t stop Howie Nicolsby from 21st Century Kilts who cycles everywhere wearing one of his many designs.)

The bikes are step through making them equally suitable for men and women, but I take my hat off to the lady with two toddlers,  one fore and the other aft, on her bike who overtook us on Leith Walk… First of all you have to download the app which will be available soon. There is both an iPhone and Android version. You can either pay £1.50 for a single trip up to an hour long or you can get a day pass for £3 or an annual subscription for £90. This allows  you unlimited 1 hour hires for 365 days.

The app will also tell you where bikes are stationed and how many are available. When you get to a station and tap unlock it will tell you which bike to take.

You can lock the bike in any of the on street docking stations making sure that the lock mechanism beeps at you and that the bike is secure. The front light will become green and the app will confirm.

But excitingly, the bikes can be left at a virtual station where there are markings on the ground. There is no rack here but you can put the bike within the markings and press End my ride on the app. The front light will go blue and you can push a lever down to secure the bike. The bike light always goes green when the bike is securely locked.

Edinburgh I think you will love these bikes and I cant wait to see the first 200 on the streets from Monday.