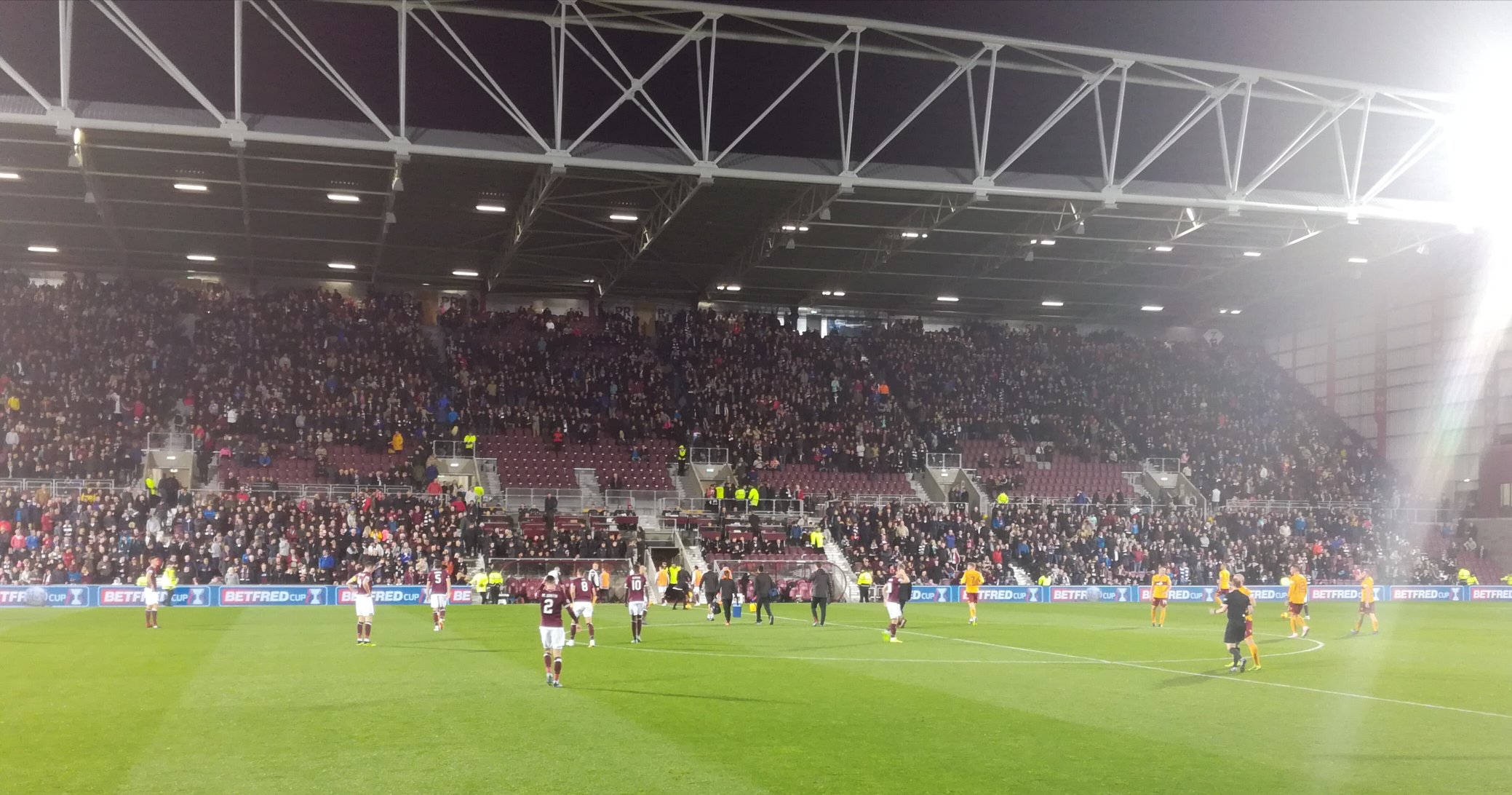 After the famine against Livingston in the Ladbrokes Premiership on Saturday, Hearts supporters were treated to a veritable feast of goals on Wednesday evening as the Maroons progressed to the semi-finals of the Betfred Cup after a thrilling 4-2 victory over last season’s finalists Motherwell.

It was a terrific game of football under the Tynecastle lights and huge credit must go to both teams for producing such a spectacle. It was as good a game I’ve seen at Tynecastle for some time.

Hearts manager Craig Levein made a couple of changes from the team that disappointed against Livingston on Saturday. Cup-tied Craig Wighton was replaced by Arnaud Djoum and 19-year-old Callumn Morrison replaced Ben Garuccio.

Determined to make amends for Saturday’s lacklustre display, Hearts came flying out of the traps and Steven Naismith and Peter Haring both had headers cleared off the line.

Despite this it was the visitors who went ahead in the 12th minute when Hearts defender Jimmy Dunne was adjudged by referee Willie Collum – a man who does like the sound of his own whistle – to have used his hand to block Donnelly’s header. It looked more like ball to hand rather than hand to ball but Main duly despatched the resultant penalty kick and Motherwell were ahead.

Hearts deservedly equalised ten minutes before half-time when fine work from Arnaud Djoum led Callumn Morrison to deliver a teasing cross which was headed on by Steven Naismith for Steven MacLean to prod home.

Hearts began the second half in determined fashion and went ahead in the 64th minute. Captain John Souttar, up lending the attack a hand, fired in an effort across the goal which was turned in by Peter Haring. Tynecastle rocked as Hearts sensed victory was theirs.

However, with ten minutes left Motherwell produced a superb equaliser when Bowman raced on to a long ball forward and fired a brilliant volley beyond the helpless Bobby Zlamal. 2-2 and it looked like we were heading for extra-time.

But, with just a couple of minutes left, Craig Levein’s side went in front again. A brilliant run by the hugely impressive Michael Smith saw the Northern Irishman feed Olly Lee. The Englishman drove the ball past the despairing arms of Well keeper Carson and into the net and Tynecastle erupted. Hearts surely had one foot in the semi-final.

They had both feet in the last four a minute later when, frantically defending a Motherwell attack, Hearts countered with a brilliant pass from Olly Lee allowing Steven Naismith to run through on goal. The Scotland striker stroked the ball past Carson to end the scoring at 4-2 for Hearts.

The Hearts players and support were jubilant as referee Collum blew his whistle moments later. It had been a magnificent game of football, a superb advert for the game in Scotland. It was just a pity that BT Sport chose to ignore it such is their devotion to Celtic and Rangers. But, like the Hibernian-Aberdeen game on Tuesday evening, Wednesday’s tie at Tynecastle was superb entertainment. There is more, so much more to Scottish football than Celtic and Rangers.

Talking of which – Hearts semi-final opponents in the Betfred Cup will be Celtic. With Celtic and Rangers both in Europa League action the week before the semi-finals, both last four ties will need to be played on Sunday 28th October – with the possibility of one of them being played at BT Murrayfield…