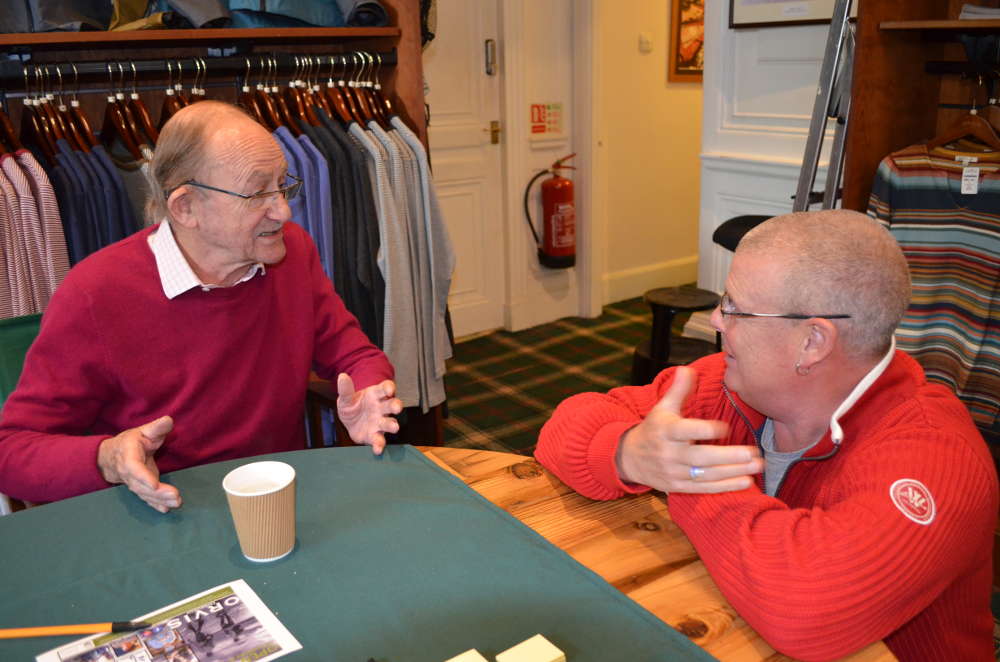 Paul Young has revealed to The Edinburgh Reporter how his highly-successful TV fishing series started.

The Edinburgh-born actor, who has just completed filming for the final series of Still Game, recalled that the idea for Hooked on Fishing came about during a chat with friends.

And Young, now 74, and the star of The Tales of Para Handy and Taggart, said that one cast in the Borders with his grandfather set him off on a career which has taken him to many countries fishing.

He said: “Fishing was a bit of fun and one day one of the guys I was with said there was no fishing on TV.

“The other chap I was with said he was a film cameraman with the BBC and he put the idea to the a top man in the BBC.

“The laughed and said: ‘Fishing on the TV, two old men sitting under a umbrella at a canal.’

“The cameraman said: ‘Hang on. Scotland is one of the most beautiful countries in the world.’”

There was a more positive response and the BBC chap said: “Go away and do a demo.”

They did and Paul, who was the VIP attraction at the Orvis Open Day in Edinburgh, said: “Ricky said he was a camera man he’ll take the pictures, Mike Shepley is a writer and he said he would do the script.

That was in the late 1980’s and Paul added: “We did four series for the BBC and then went to Scottish Television and did several series and that is when we started going abroad.

“We went to Iceland and other countries and then Discovery picked it up as they like the foreign travel.

“We went to Argentina, Costa Rica, Chile and Alaksa among other places and it was fantastic, but it was hard work as you had to catch fish.

“You don’t always get them first cast but it was a privilege really to see all these wonderful places.”

Paul has just finished filming for Still Game and said: “I’m in three episodes in this series which is nice and when it started off all those years ago I was really only in one episode.

“Last year I had five and this is the last series. It was nice to be involved in that.”
Paul said that he had plenty of time for fishing now but he has to be careful because of a “shoogly” knee.

Looking back, Young revealed that the first time he cast a line was at the Leider Water in the Borders with his grandfather, a keen fisherman.

“As we used to do in those days, once you got a car you went for a run on a Sunday.

“I used to fish a worm and there is nothing wrong with that, I’ve always loved fishing a worm. We caught wee trout and that was the start of it.

“Also, I lived in Joppa and so I was able to go down to the prom and fish for flounders during the winter and mackerel during the summer.”

The first river he fished was the Lyne Water in the Peebles area and added that it was now difficult to get youngsters into fishing.

He said: “The difficulty for a lot of them (youngsters) is transport and you need somebody who is willing to put in a day with you and take you somewhere.

“I was lucky that I had an old guy up the road who used to take me to Loch Leven and places like that.

“The other thing that is difficult these days is knowing what to buy as there is so much choice of fishing tackle, where do you start?

“I must say, however, that the staff in all these places are really helpful and there are good starter kids where you can get a rod, reel and line for £50.

“Always ask in any shop you go into. All the staff will have a different discipline that they can talk about and they will help you, never be frightened to ask.”