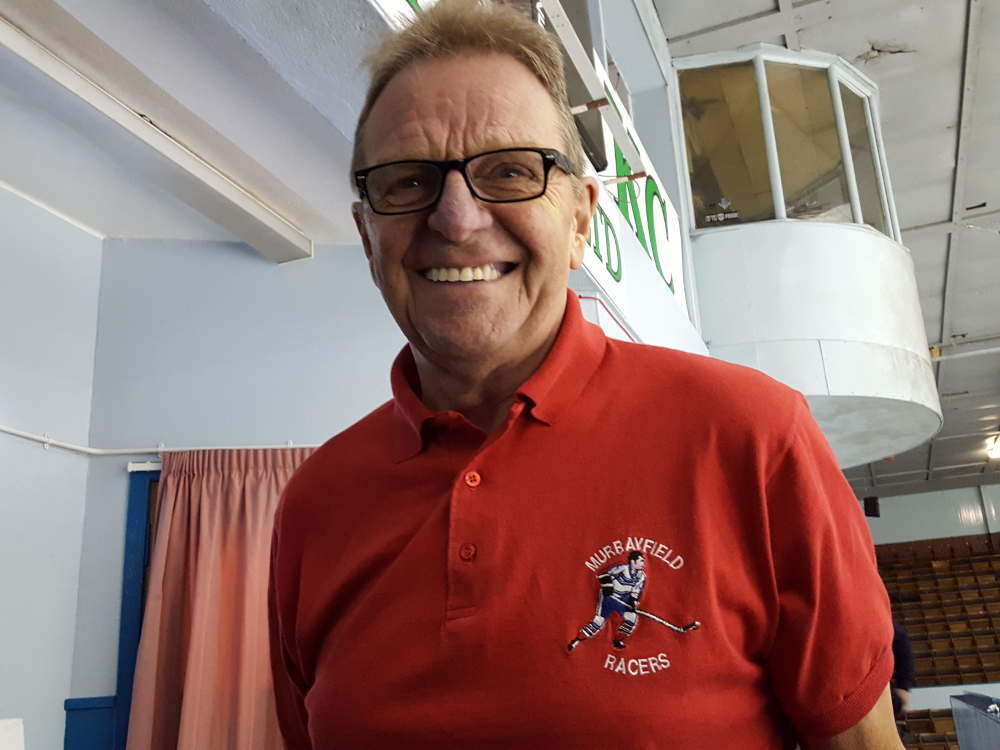 Derek Reilly, a Murrayfield Racers legend, has told the current squad: “I’m behind you all the way.”

The former goal-grabbing machine wore a Racers polo shirt from the former era as he watched the re-born club in their first home clash.

And Reilly said: “I still enjoy coming out and watching the team and hopefully this is the grass roots starting again.

Reilly, who played for Racers between 1964 and 1984, said it was vital that Tony Hand picked up the reigns following the demise of Edinburgh Capitals.

The former Great Britain international left-wing or centre said: “In my eyes it was vital. As you and I know, Tony is the best British player ever.

“A guy like that working with the team here is great for Edinburgh. It is going to take a while, possibly three or four years to get the thing up and running, and if I can give them any help at any time all they need to do is ask. I want to see Racers back to where they should be.”

Reilly, who is in the British ice hockey Hall of Fame, said the old Murrayfield Racers squad was the best in Britain by far.

He added: “They were a step above everybody else. They had good coaches in Johnny Carlisle and Alex Dampier.

“They then had Chris Kelland in defence and Willie Clarke in goals, and he was the best goalkeeper in the league without a doubt.

“And we had guys like Lawrence Lovell and Chalkie Kerr and it was just great. We all worked hard for each other.”

And in a message to the current Racers fans he said: “They must not expect too much too soon. It will take time but it is fabulous that they are back and I’m delighted for them.”

Reilly was pleased that the squad won their first game at Dundee Comets in the first-leg of the Caledonia Cup.

They lost the second game 5-3 and then failed to land the silverware when Edinburgh-based Lewis Gold scored with one second left of sudden death overtime.

Reilly said: “All these young lads getting together with some older heads I think they will do OK.”

The former player will be behind the goals when Racers place North Ayr Wild on Sunday at Murrayfield (6pm). Tickets are available at the door.