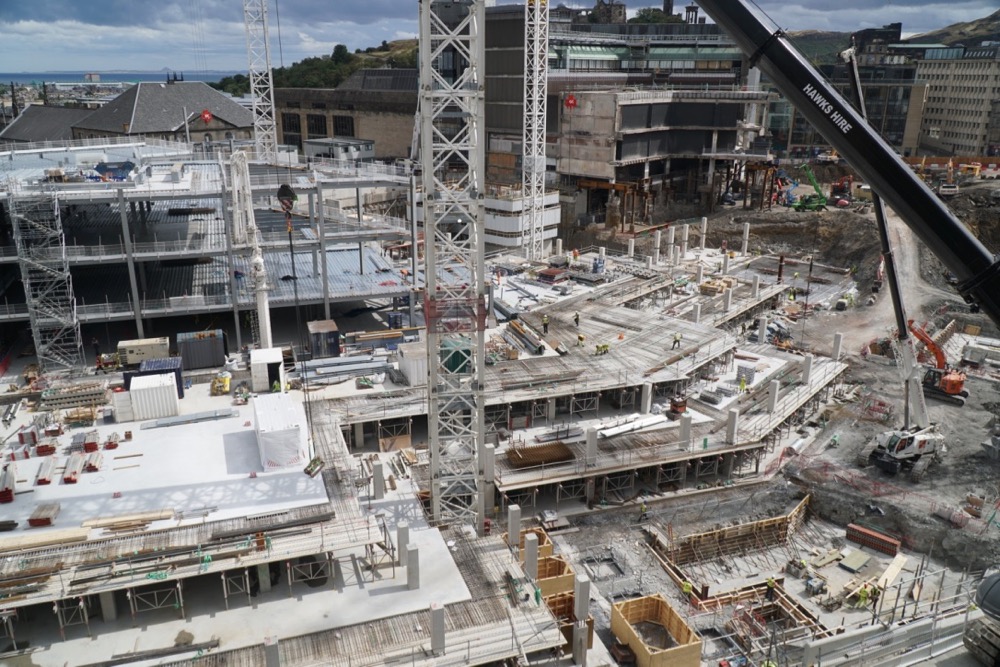 Yes, really this project is now halfway to completion, although we are sure that a lot of you won’t believe it.

We met with Martin Perry who is project director of Edinburgh St James and also Director of Development for TH Real Estate. He is in charge of the billion pound development at the top of Leith Walk which will be home for some, a place of business for others and somewhere to find a hotel room for visitors.

He explained why there was such a long lead in to the actual construction phase. He explained : “The project was unusual due to the extent of demolition and excavation that needed to happen. We obviously had to take down the whole shopping centre along with removing its foundations.

“We also excavated down what is about five storeys. That in itself was around 18 months of work, so what you see out there is really what has happened over the last six months.

He took us out to the balcony above Elder Street where you can look right down into the development site. There is certainly a lot of activity, and many huge cranes which you can see from across Edinburgh.

He continued : “The biggest problem we had on Leith Street was that the Victorian sewer was not in good repair. Leith Street falls very steeply, but a sewer doesn’t fall so steeply. By the time we got to the top end of Leith Street where it gets to its narrowest, it was about two storeys down in the ground. This was logistically incredibly difficult to sort out, so we took the opportunity in closing Leith Street to replace all of the infrastructure. Every piece of services was redone with new ones that are all traceable.

“The advantage of that is that there is far less need to go in and repair things because they are all brand new and you know exactly where they are. Most of the time when they do repairs of services they are digging around trying to find them. So this was an opportunity to prevent future maintenance of the street and at the same time we put high quality finishes in.”

So what stage is the development at now? It may not look as though much has been done from outside the site, but work has been going on here for some time.  As at October 2017 the demolition phase had been ongoing for about a year. Laing O’Rourke is the main contractor for both the demolition and construction. 1300 people had been inducted to work on site and 1000 of those live within 100 miles of the project.

The contractors will now move down the street to Picardy Place to set up the site areas and the compound there in preparation for the next stage. Mr Perry explained this will take a bit of time. He said : “Unfortunately that area will have a lot of cones and will be a bit messy for a while yet. The advantage of the Picardy Place area is that we have a lot more space in comparison to Leith Street, and we don’t have to close anything in order to do it. There is a need to reroute things though. We have been waiting for the council to conclude what they want for that design, and that is still not quite complete at this point.”

The difficulty in concluding what Picardy Place will look like in the long term is that it is bound up with the decision on the tram extension to Newhaven. This decision is expected later this year.

Martin continued : “We expect to have the road layout running in its new configuration by the end of this year, with the majority of Picardy Place works completed by the spring of next year. I can’t see a full scale decision of the tram happening in that time frame, mainly as there is a lot of pressure to wait for the results of the public enquiry and so on.”

The cycle lanes from Picardy Place to Calton Road did not open at the same time as the street which caused some consternation among cyclists who had become used to dedicated cycle lanes here.

Perry explained they will not open till later in the year. He said : “The cycle lane which connects the Leith Walk improvement plan to the new works on Leith Street – that section which passes through Picardy Place – is one of the first that we are trying to get up and running. But there are a lot of constraints there because you actually have seating outside, and the Omni is in that space too.

“Although we are not changing the pavement line there is a priority being placed on that to try and get that up and running as quickly as possible.”

So when will we see any actual buildings above the height of the hoardings around the site?

Martin exclaimed : “Well you can see that now! The first set of superstructure which is the steelwork that arrived recently, moves up very quickly. At the end of August there will be a second team of steel erectors coming on site. That will then double the pace and it will be pretty rapid.

“I think by the end of the year you will see quite a lot of the structure up and the shape of the actual development.”

The programme is still on target but Martin admits he will be a lot more relieved when the development is out of the ground, as it is in the ground that you find all of the unexpected things like rock formations and stray services. He concludes : “Even with as much survey work as we have done and trenches that you can dig you still find things that surprise you. We created a contingency for that, and we are nearly through that now which makes me an awful lot happier! It makes predicting dates a lot more comfortable so we are still on course for opening the retail section in 2020.

15,000 tonnes of locally fabricated steel was delivered on site just recently. This was made up of some 33,000 individual pieces smelted just 45 minutes away from the project by BHC in Carnwath, South Lanarkshire.

The total quantity of steel delivered to Edinburgh St James this summer is equivalent in weight to 7,500 cars, or 3,000 elephants.

With 400 workers on site and four new tower cranes having also arrived in recent months, including one of the largest tower cranes in Europe, the project’s main contractor Laing O’Rourke has already swung into action installing the steel.

The mixed-use scheme is one of the largest and most significant regeneration projects currently underway in the UK. There will be 850,000 sq ft of retail space, 85 new shops and 32 food and beverage units, an Everyman Cinema, up to 150 new homes, a five-star luxury W Hotel, a Roomzzz Aparthotel and three new public squares.

When the steel arrived Tim Kelly, Project Director, Laing O’Rourke said: “The steel arrival is an important milestone in the construction stage of the development, as it gives us the material to keep on track to finish works by 2020. It’s also been very rewarding to have been able to work with the local community by sourcing the steel resources we need for this project from Carnwath. We’re working with the local community to provide both the workforce and resources to transform Edinburgh city centre.”

Cllr Kate Campbell, Housing and Economy Convener, said: “It is great to see work progressing so well on this key project, which will bring so much economic benefit to the city. Edinburgh St James will transform the East End of the city centre, creating up to 3000 permanent jobs in the retail and hospitality sectors and represents one of the largest inward investments to Scotland for many years.”