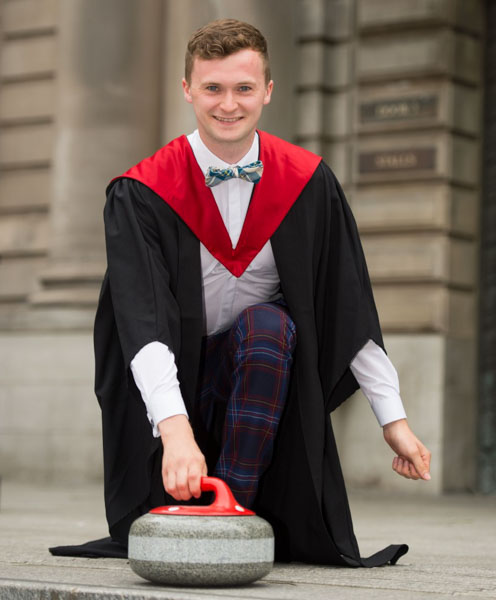 Bruce Mouat, on of the countries top curlers, revealed a second talent as he graduated on Friday with a First Class honours degree.

The 23-year-old has racked up a string of successes in the roaring game in a glittering career on the ice.

However, today he joined hundreds of Edinburgh Napier students at the Usher Hall to be honoured for his academic achievements as he collected his BA (Hons) in International Festival and Event Management with Entrepreneurship.

Bruce, from the Slateford area of Edinburgh, has held the titles of World Junior Curling Champion (2016), World University Champion (2017) and Scottish Champion (2018), and this year he was a bronze medallist at the World Championship in Las Vegas and also the youngest skip to win a Grand Slam of Curling event.

His travel from tournament to tournament did not always allow him time to see the sights though as he had to ensure his pursuit of medals did not come at the expense of his studies.

Bruce said: “It has not been an easy year – trying to write my dissertation as well as competing at the highest level in curling. I was fortunate enough to have a great support team helping me with my sporting career as well as understanding lecturers who knew I wouldn’t always be able to attend their classes due to a heavy travel schedule.”

The young curler spent five weeks in North America in the spring, competing in the World Championship and Grand Slam events, at a time when he had a dissertation deadline, exams and final assignment hand-ins.

He said: “The commitment it took to complete my degree as well as my curling season was pretty tough; it took a lot of long nights in the library and some stressful moments doing work on flights to curling competitions but I am very proud to have managed it.

“It wouldn’t have been possible without the help of Sport Scotland’s Performance Lifestyle coaches and the University. I was granted extensions allowing me to graduate with my peers and to hand in something I could be proud of instead of having to rush it. I am really excited to graduate and to move forward with my sporting career.

“Now I can set my sights on the Olympics in four years time.”

David Jarman, Programme Leader for BA (Hons) International Festival & Event Management, said: “Bruce’s sporting and academic achievements are a worthy reflection of his hard work and dedication throughout his time at Edinburgh Napier. We have seen him bring his competition experiences into the research, taught and industry-focused elements of his degree, to excellent effect.

“He can now focus on his role as skip, and we’ll all follow his progress.”