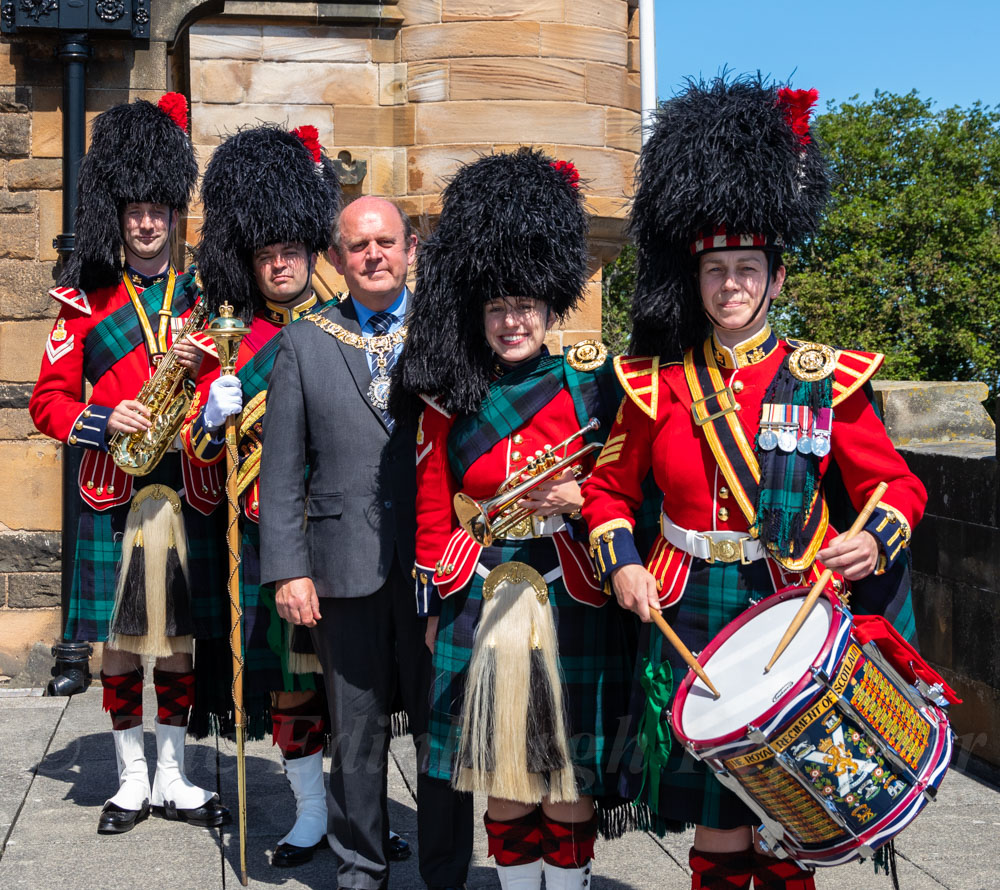 100 Years of Armistice to be marked at Assembly Rooms

In a major commemoration of a century since the end of the First World War, a Concert of Remembrance will be held in Edinburgh later on this year.

Bands of the Royal Regiment of Scotland, Her Majesty’s Royal Marines Scotland and Royal Air Force Central Scotland Pipes and Drums will feature in a stirring night of music reflecting on the events of the ‘war to end all wars’.

Musicians from the Royal Regiment joined the Lord Provost and Legion Scotland’s Kevin Gray MM today (Friday 6 July) to announce the event, which will take place at the Council’s Assembly Rooms on Friday 9 November.

Lord Provost Frank Ross said: “This summer marks the centenary of the start of the Hundred Days Offensive and the final stages of the First World War, providing an opportunity for all of us to reflect on the toll the war took on the nation and the bravery of those who fought for us.

“In Edinburgh, we have been marking the anniversary year with several public commemorations, including the design of this summer’s Floral Clock which blooms red for remembrance in Princes Street Gardens.

“Our Concert of Remembrance will be held to mark the end of the war. It will show our city’s collective thanks to those who put their lives on the line and commemorate the centenary of Armistice. I hope the unique line-up rings it loud and clear that in Edinburgh, we will never forget.”

Legion Scotland Chief Executive, Kevin Gray, said: “100 years ago the First World War ended, and a new world began. The example and experience of those who lived through it shaped the world we live in today. In 2018 The Royal British Legion Scotland is leading the nation in saying ‘Thank You’ to all who served, sacrificed and changed our world.

“The Concert of Remembrance is a key part of these important commemorations and we are extremely grateful to the Lord Provost and the City of Edinburgh for hosting this event.”

A limited number of early bird discount tickets are available now priced at £10 (full price £15). These can be purchased from the Usher Hall box office at http://www.usherhall.co.uk/ or by calling 0131 228 1155. Please note the event takes place at the Assembly Rooms on George Street and the Usher Hall is simply handling ticket sales.

The First World War took a devastating toll on Scotland. Of the 700,000 Scots who joined the forces, more than 100,000 were never to return home.

Nearly every village, city and town in Scotland has some form of memorial displaying the names of their war dead and the Scottish National War Memorial is in Edinburgh Castle. It commemorates Scottish soldiers, and those serving with Scottish regiments, who died in the two world wars and more recent conflicts.