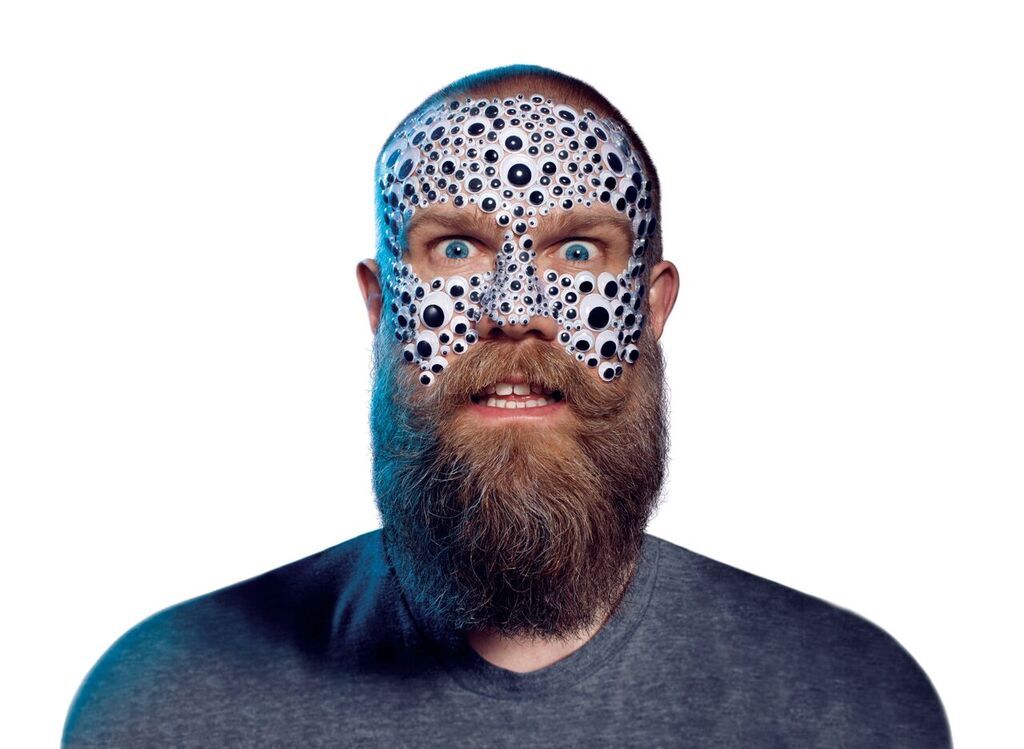 Critically acclaimed idiot and author, Olaf Falafel is back with another hour of surreal stupidity, inventive jokes, audience participation and the veryloosest of themes. You’ll laugh, you’ll be confused, you’ll enjoy most of it.

Ouija boards and workplace morale-boosting dolphins featured heavily although whatever it is, (a bit confused what this means) Olaf personally guarantees your money back if you actually learn something of any use.

There’s no i in idiot is the follow up to The Marmosets of My Mind and Falafel’s award-nominated debut hour, Olaf Falafel and the Cheese of Truth. It explores the stranger recesses of Olaf’s head via a blend of stand up, audience interaction, projected video stuff and domestic cleaning products.

Olaf’s highly successful absurdist movies include a croissant-coiffured talking Donald Trump puppet (retweeted over 19,000 times, with 23 million views), slices of truth telling cheese being thrown onto newspapers and the Bee Gees hiding in beards. Olaf enjoys an average of over 500 retweets a day for his comedic output and has had over
75 million views on the former social media platform Vine.

The comedy website Chortle affectionately described Falafel as ‘an idiot’ and when he doesn’t have a microphone in his hand you’ll find him with a pencil and pad working on his series of children’s books aimed at his intellectual equals. Falafel hit the headlines by securing publishing’s fastest ever picture book deal (via one Tweet) for his semi-autobiographical masterpiece Old MacDonald Heard A Fart. This was followed up by Father Christmas Heard A Fart and will be joined by a pumping new title soon.

Title: Olaf Falafel:
There’s no i in idiot