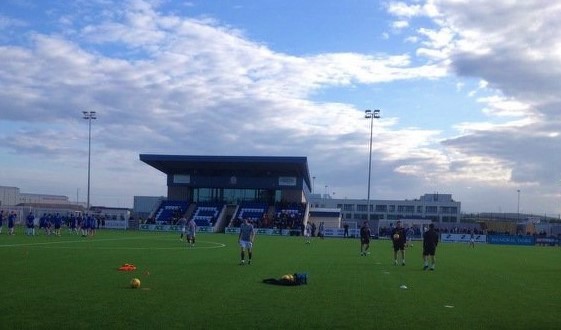 Hearts kicked off season 2018/19 on the outskirts of Aberdeen on Wednesday evening when they visited Highland League champions Cove Rangers on Betfred Cup business.

The Maroons had a torrid time in this competition this time last year, only finishing third in their section and losing to Peterhead, a result which all but sealed former manager Ian Cathro’s fate. However, Hearts made sure there was to be no further upset in the north-east of Scotland with a hard-earned win against Cove Rangers with goals from Olly Lee and Steven MacLean although they were made to sweat a bit when the home side pulled a goal back towards the end of the game.

Hearts began brightly, and Jake Mulraney caused the home defence a few problems with his pace. It was no surprise when Hearts went in front after 11 minutes when Olly Lee played a one-two with Kyle Lafferty before firing past Cove keeper McKenzie.

With half an hour gone Hearts thought they had doubled their lead when Steven MacLean stabbed the ball home from close range, but the assistant referee raised his flag for offside.

Cove were beginning to feel the pressure now and Bozanic was the latest to try his luck with a free-kick from 25 yards which zipped past the post.

Another cross from Mulraney was headed on by Lafferty but MacLean’s effort was well saved by McKenzie before John Souttar saw his header scrambled off the line by Kelly.

There were nearly 800 Hearts fans at Cove’s new stadium and they were nearly celebrating a second Hearts goal early in the second half when the ever-dangerous Mulraney raced down the left before firing in a shot which was parried by McKenzie to Bozanic but his shot on goal was thwarted by Strachan who cleared off the line.

Twelve minutes into the second half Hearts went 2-0 ahead. Bozanic’s corner found the head of Peter Haring and the ball dropped for Steven MacLean to prod home. The 35-year-old former St Johnstone player thus became the oldest Hearts player to score on his competitive debut.

MacLean them almost turned provider when he set Olly Lee through on goal. The Englishman took the ball round keeper McKenzie but then undid his good work by hitting the post. It was a missed chance Hearts nearly had cause to regret.

With 15 minutes left, the home side grabbed a goal back when Park was given virtually all of the park to race into Hearts penalty box to square to McManus who had the freedom of Cove to score.

It just isn’t Hearts to do things the easy way and they had to withstand some pressure from the Highland League champs in the closing stages. However, the game ended with Hearts securing all three points and they now head to Fife on Saturday and their next Betfred Cup tie against Raith Rovers.