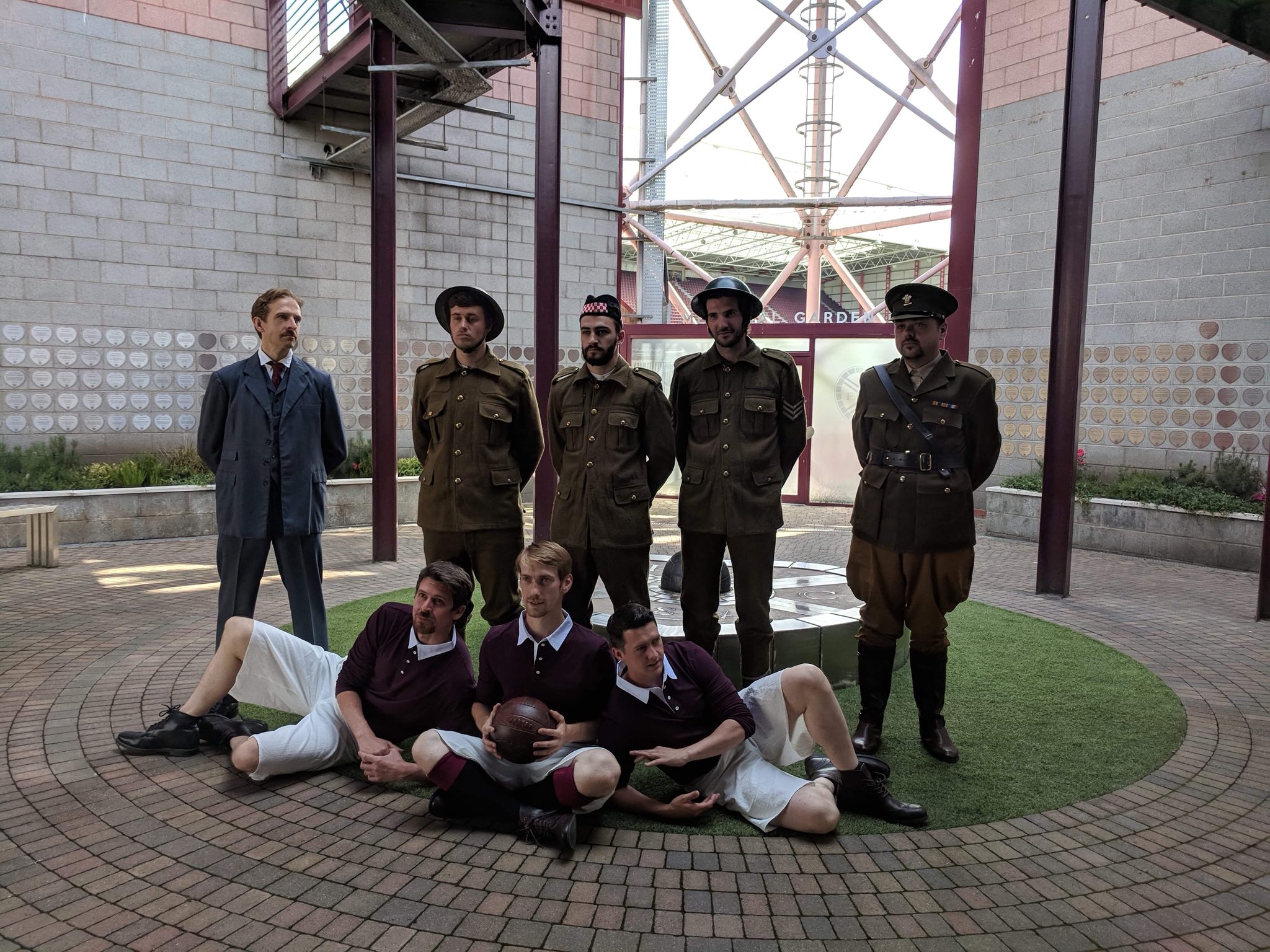 It’s 1914. One of the bloodiest conflicts the world has seen – described at the time as the ‘war to end all wars’ – breaks out in Europe. In Scotland, football continues and is seen by many as a welcome distraction from the horrors of war in Europe.

At the top of the First Division sit Heart of Midlothian FC. They have won 19 of 21 matches and it seems no one can stop Edinburgh’s finest football club becoming Scottish league champions. Then, thirteen of the Hearts players volunteer to serve together in McCrae’s Battalion destined to fight in France.

A War of Two Halves is their story; an evocative and dramatic journey through Tynecastle Park led by the players/soldiers in a unique site-specific performance. Follow the Hearts from the football fields of Gorgie, to the battlefields of the Somme.

Written by Paul Beeson & Tim Barrow, and featuring a cast of young Scottish actors, A War of Two Halves is directed by Bruce Strachan, Artistic Director of Nonsense Room Productions.

Strachan says: “This is a truly iconic story and is absolutely synonymous with Edinburgh and Heart of Midlothian Football Club. It is an honour for us to bring this story to life. With 2018 marking 100 years since the signing of the Armistice, it is the perfect time to share the remarkable story of “the bravest team” for a new generation of fans. Every Hearts fan will have heard of McCrae’s Battalion – this is the chance to really understand their story. For a wider audience, the opportunity to experience a behind-the-scenes view of a football stadium with a dramatic retelling of historical events will be a truly unique Fringe experience.”

Heart of Midlothian Football Club welcome audiences to their stadium, the historic Tynecastle Park and said:

“It is absolutely fitting that in the year of the centenary of the Armistice, Tynecastle Park should host This is My Story’s production, A War of Two Halves. By telling the story that started with a rallying cry at our ground from Lieut-Col. Sir George McCrae, it pays homage to the footballers who volunteered to go to the front in 1914. Many paid the ultimate price for their country. Their memory will never be forgotten and is honoured throughout Tynecastle Park. This is a story that needs to be told to as broad an audience as possible. It takes on particular poignancy as it comes to life in the very ground the team left in 1914, with action taking place throughout the stadium. This unique “promenade performance” will undoubtedly be a standout piece in this year’s Fringe Festival and we would urge parents to consider bringing their children to experience this historically important production and to learn of the sacrifice of “the bravest team.”

A War of Two Halves plays at Tynecastle Park from Thursday 2nd August to Sunday 19th August 2018, with shows beginning at 1pm, 3:30pm, 6pm and 8:30pm daily (not Sat 11th). The production is suitable for ages 12 and upwards. Fans of all football clubs are welcome.

Joe Savage reflects on a successful summer window at Hearts