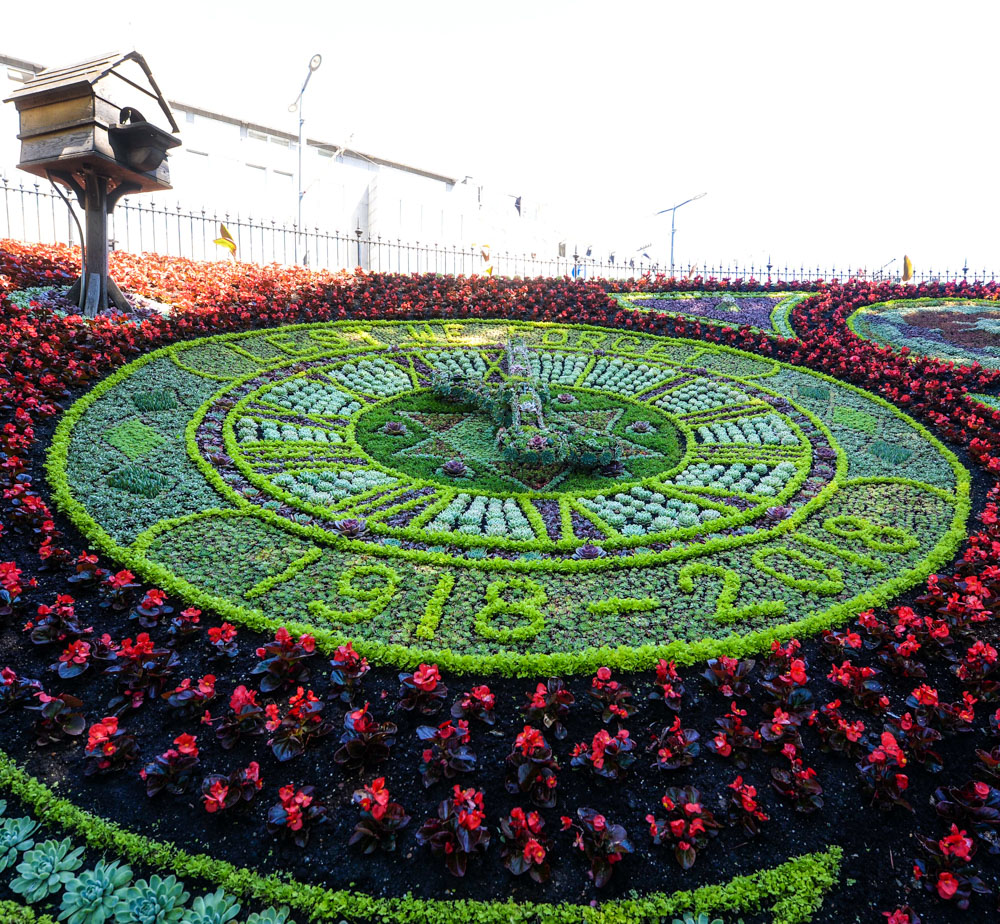 Edinburgh’s historic Floral Clock – which this summer has been designed to mark 100 years since the signing of the Armistice, leading to the end of the First World War – has had its finishing touches put to it prior to today’s (Tuesday) unveiling.

The West Princes Street Gardens landmark, maintained by the City of Edinburgh Council, has been created in partnership with Armed Forces charity Poppyscotland as part of their year-long fundraising campaign, The 1918 Poppy Pledge.

On Tuesday (3 July), Edinburgh’s Lord Provost, Frank Ross, was joined by Poppyscotland’s Chief Executive Mark Bibbey, workers and ex-servicemen from Poppyscotland’s Lady Haig Poppy Factory, where all of the country’s five million poppies are made each year, and parks staff responsible for creating the clock. Together they officially unveiled the design, which features a poppy flanked by two First World War soldiers.

Poppyscotland’s 1918 Poppy Pledge aims to commemorate those who fell in the First World War, with funds raised helping to provide support to those in the Armed Forces community.

Lord Provost, Frank Ross, said: “It is an honour to be able to support the life-changing work carried out by Poppyscotland with this Floral Clock design, which this year will provide a particularly poignant reminder of the signing of the Armistice, 100 years on from the end of World War One.

“As always, I am delighted to officially unveil this striking and much-loved creation, which is a source of enjoyment and fascination for so many people every day, and I’d like to congratulate our dedicated parks staff, whose hard work has paid off once again.” Gordon Michie, Head of Fundraising at Poppyscotland, said: “I am delighted that The City of Edinburgh Council has chosen to commemorate the signing of the Armistice this year by dedicating the world-famous Floral Clock to Poppyscotland and our work supporting beneficiaries across Scotland.

“This support, which is part of our wider #1918PoppyPledge campaign, will give a unique, powerful and emotive view of Remembrance in the vibrancy and colour of the 35,000 flowers that have been planted. It will be a place to not only visit and take photographs, but also a place to reflect on the sacrifices that so many gave on our behalf. Furthermore, it is fitting that the Floral Clock is situated close to so many other monuments in West Princes Street Gardens to those that have served.”

The Floral Clock was first created in 1903 by the Edinburgh Parks Superintendent, John McHattie. The clock initially operated with only an hour hand with a minute hand added in 1904, followed by an accompanying cuckoo clock in 1952. Until 1972 the clock was operated mechanically, and had to be wound daily.

Since 1946 it has been designed in honour of various organisations and individuals, including the Girl Guides Association, Robert Louis Stevenson and the Queen, for her Golden Jubilee.

It has taken two gardeners more than a month to plant the 35,000 flowers and plants used to create the clock, which will be in bloom until October.

Poppyscotland provides life-changing support to the Armed Forces community, with money raised from the Scottish Poppy Appeal and year-round fundraising enabling the charity to provide tailored funding and assistance, as well as advice, employment, housing, healthcare and respite.

•May – when planting begins

•1973 – when the clock began being operated electrically