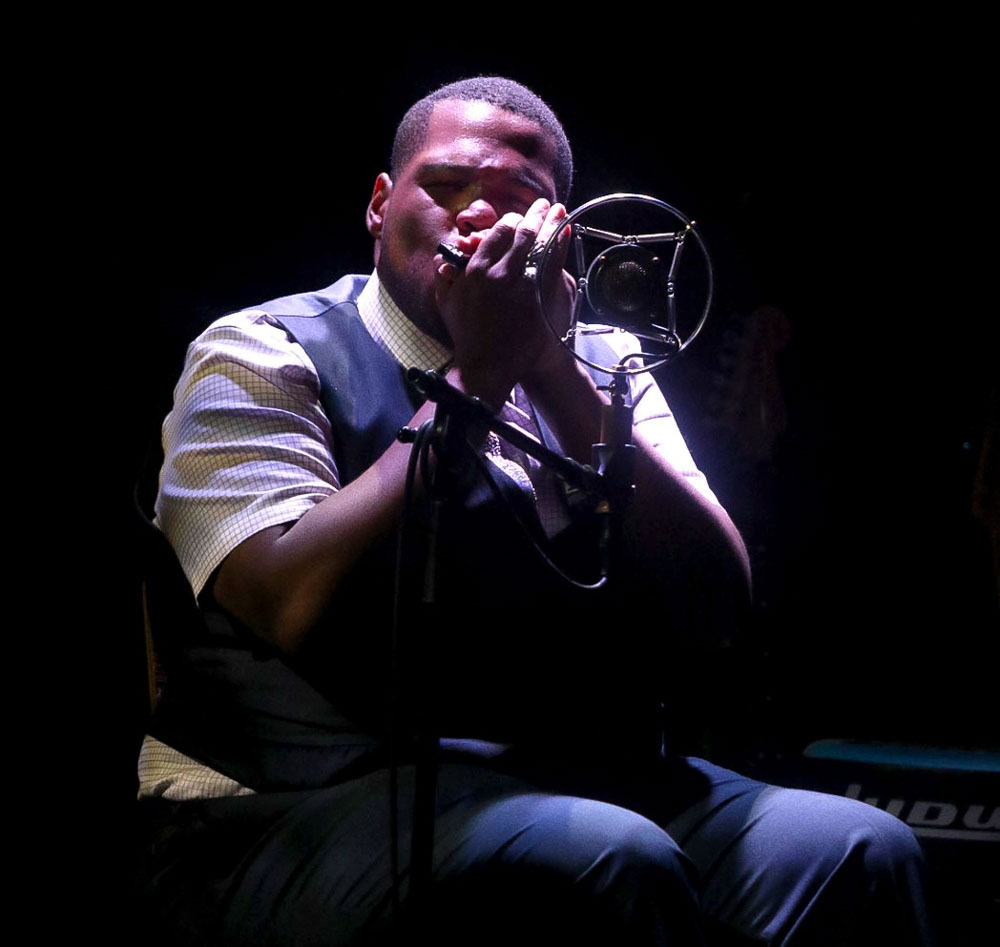 Festival goers will see world-class names from the USA perform alongside our own superb UK artists, crossing all blues styles, from Mississippi country blues to contemporary rock-blues, but our emphasis is on the core of the music, and picking out the original, the special, and the innovative.

On Friday 20 July, we welcome back many old friends long associated with the festival for our 40th Anniversary Blues Gala. Headlined by the Queen of Scottish Blues, Maggie Bell and a host of other leading Scottish blues talent including Tim Elliott, Mud In Your Ear, Jensen Interceptors, Sandy Tweeddale band, The Troublemakers, Jed Potts and John Bruce. Ex-Whitesnake guitarist, Bernie Marsden and Memphis harmonica hero Brandon Santini complete the line up which will deliver blues from the delta, electric blues from Chicago, full on blues-rock, and most styles in between.

We go back to Chicago and the music of the 50s and 60s for one of our feature concerts. Muddy Waters’ son, Mud Morganfield, sounds uncannily like his “pop” and sings his great tunes with a band that recreates the authentic sound. John Primer is another great son of Chicago, for many years he was bandleader and guitarist for Muddy Waters, Willie Dixon, Magic Slim & The Teardrops, as well as leading his own bands. They play the Assembly Hall on July 21. Another Chicago blues legend joins the Blues Afternoon on Sunday 15 July as harmonica wizard Billy Branch plays with Giles Robson Band.

Earl Thomas has been described as the most important blues voice of his generation by The Best of Blues. He comes from a long line of musicians and singers who were slaves and share-croppers. His father was a bluesman and his mother was a gospel singer. “I was listening to Old Negro Spirituals in the womb,” says Thomas. “I have the blues vocabulary in my genetics.” He plays three dates at the Festival on 15, 16 and 17 July.

We are delighted to introduce two exciting new artists: when Blues promoters and aficianados get together and talk about the future, there’s one name that constantly comes up. St Louis guitarist/vocalist, Marquise Knox is widely regarded as the real deal and the most exciting young talent on the world blues scene. For him, Blues is his heritage and he’s steeped in the old masters from BB King to Muddy Waters. Hearing Knox is an insight into what the legends might have sounded like as young men. He’s got a prodigious, rich, soulful voice like Muddy Waters, and he’s a superb guitarist, with a classic style, direct and packing a powerful punch. He plays on 13 and 14 July.

Jerron Blind Boy Paxton carries the torch for traditional acoustic blues. He’s the most sensational newcomer in acoustic blues since the originals left us. He plays banjo, fiddle, guitar, piano, harmonica, Cajun accordion, and the bones, most of them brilliantly. He sings with a classic weary tone when he wants, and is cheerfully bright on upbeat tunes. He tells stories and jokes that show he’s as smart as a button, easing audiences into a good time. He mixes it all in the true songster tradition: ragtime, hokum, old time, French reels, Appalachian mountain music and, of course, blues, and he always leaves audiences smiling. Blind Boy is in residence from 17 to 20 July. The Festival has wealth of other international blues attractions. From Idaho, the rich country-tinged, swampy-swingin’, hillbilly-delta-blues-ragtime music of Hillfolk Noir. From Tennessee Amythyst Kiah’s commanding stage presence is only matched by her raw and powerful vocals – a deeply moving, hypnotic sound that stirs echoes of a distant and restless past. Two blues troubadours grace the Festival: from St Louis blues guitarist, Doug McLeod winner of the Blues Foundation’s acoustic album of the year 2018. Nashville-based singer-songwriter and guitarist, Stacy Mitchhart who frequently breaks out the cigar box guitars. Memphis vocalist and harmonica player Brandon Santini is no stranger to Edinburgh audiences and returns for two concerts. French duo Max & Veronica passionately play country blues and ragtime, hokum, jug band and rural music from the 20s and 30s on ukuleles, washboard, kazoo, acoustic and resophonic guitars. We’ve already got to know Davina And The Vagabonds, another mid-west export, and we know Davina Sowers’ band is not strictly a blues act, but her rollicking piano playing and singing is soaked in blues, as well as swing, and boogie, early rock n’ roll, and traditional N’Orleans. They’ll be here for two days: July 19 and 20.

Tickets are available from 2pm on Tuesday 1 May:

* In person from The Hub, Castlehill, Edinburgh, EH1 2NE.