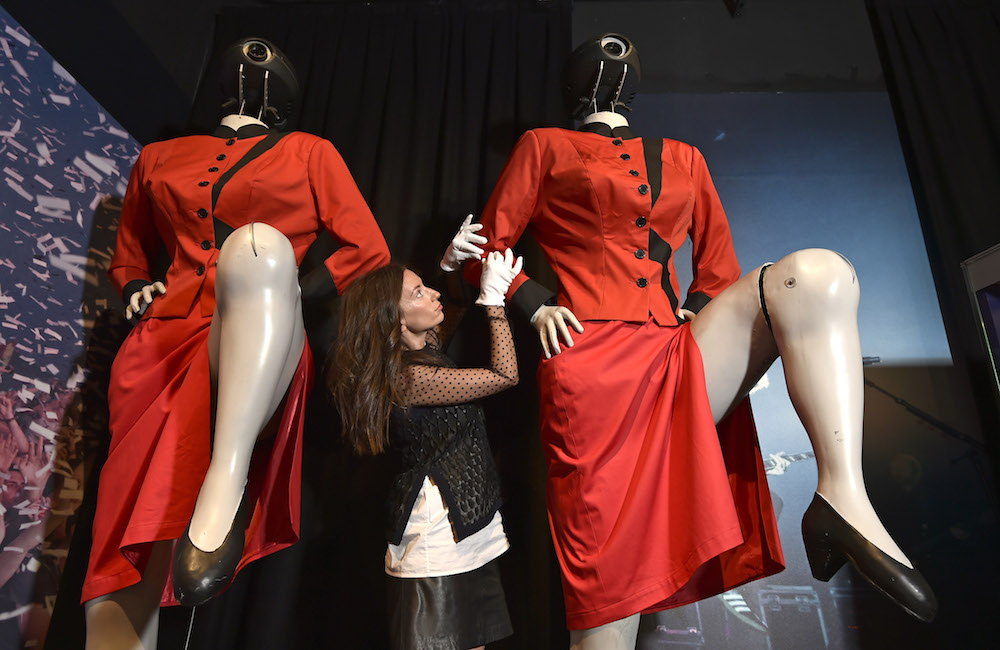 The big exhibition of this summer at the National Museum of Scotland is Rip It Up : The Story of Scottish Pop which runs until 25 November 2018.

When you stand back and consider the Scottish music scene over the last fifty years there have been some hugely successful stars of pop, rock and all other kinds of popular music. This shines the spotlight firmly on Scotland with film, costumes, memorabilia, instruments and props on loan from Scottish musicians including The Proclaimers, Shirley Manson, Lulu, Midge Ure, Simple Minds, Annie Lennox, Gerry Rafferty, Alex Harvey, Texas, Franz Ferdinand and Young Fathers.

A three part BBC TV series has been produced to tell the story of the musicians and the fans. There is a new book written by Vic Galloway who is a writer, broadcaster and DJ who will also present a four part series on BBC Radio Scotland.

Names like Lonnie Donegan will introduce you to skiffle music where it all began. Lulu had a trouser suit custom made for her and that is on display. A guitar painted for Gerry Rafferty by his friend and fellow Paisley buddy, artist John Byrne is there too. The Rezillos, Clare Grogan of Altered Images, Richard Jobson of the Skids, Stuart Adamson of Big Country and of course Simple Minds.

The Average White Band, Biffy Clyro and Paulo Nutini are all featured and this list is far from exhaustive.

For anyone who is Scottish and interested in music this is a very important not to be missed exhibition. It will undoubtedly be very popular!

Stephen Allen, Exhibition Curator said: “Popular music is a shared experience, and a really important one in many people’s lives. We want the exhibition to capture people’s imagination and allow them to reflect on their own experiences of listening to and enjoying music. Between the objects, the AV and the music, people will be able to learn more about their favourite artists and see their treasured objects up close, but also to discover music that is new to them in a whistlestop tour of over six decades of Scottish pop.”

Shirley Manson, lead singer of Garbage said: “I’m exceedingly grateful to the National Museum of Scotland for envisioning the idea for Rip it Up and in doing so, recognising the depth and influence of Scottish artists and their music. Scotland has long deserved an examination of its rich musical heritage, the effects of which can be heard all over our globe today.

“While music is universal, and Garbage are an international band, being Scottish is a large part of who I am and has had a huge bearing on my work and our career.  I’m honoured to be included in the exhibition alongside my peers and many of the artists who influenced and moulded my own musical identity. I must admit that I’m actually very much looking forward to seeing the exhibition myself.”

Author and Broadcaster Vic Galloway said: “The Rip It Up:- The Story of Scottish Pop exhibition is a real triumph and shows off Scotland’s major role in the 20th and 21st Century’s most inspiring, influential and popular artform. From Lonnie Donegan and Alex Harvey in the 1950’s to Young Fathers and Calvin Harris today, via the huge successes of the 70’s, 80’s and 90’s, it’s a roller-coaster ride of sound and vision. Hats off to Stephen Allen and his team. It’s been an honour to write the official book in association with the museum, and to present the accompanying radio series for the BBC. I hope local and international visitors alike dig in and enjoy this celebration as I have.”

While Rip It Up is in the Museum, a programme of musical events are being staged around Edinburgh so that you can experience Scottish pop music first hand.

There will be live performances, talks and discussions hosted at the museum and associated programming was included as part of the Southern Exposure festival at Summerhall which ended yesterday.

During the Edinburgh International Festival there will be more shows at Summerhall. There is also a compilation CD to accompany the exhibition.

Edinburgh music walking tours will tell the story of musicians who come from, live or work in the capital. There will be tours every Saturday. From the Bay City Rollers to folk, pop to punk, this walk will tell you about the people, the places and the gigs. Book tickets here.

If you book a tour you get £5 off Rip It Up at the museum. At Leith Theatre Light on the Shore with Edinburgh Gin Seashore is part of the Edinburgh International Festival from 9-25 August. There will be some big names appearing her across all genres of music, but particular mention has to be given to Mogwai, Django Django and King Creosote. Anna Meredith who will take part in the opening night event at the Usher Hall will also appear at Leith Theatre performing Varmints with Southbank Sinfonia and you are promised unforgettable nights. Oh and then there is Martin Bennett’s Bothy Culture performed by the Grit Orchestra & Greg Lawson. What a treat you have in store. Book your tickets here now.

Both the exhibition and the National Museums Scotland programme of events are sponsored by Baillie Gifford Investment Managers.

A spokesperson from Baillie Gifford Investment Managers said: “We are delighted to be continuing our association with National Museums Scotland by supporting Rip it Up. This exhibition features objects from such a wide range of Scottish musicians that it is sure to appeal to all ages, from those who can remember dancehall and ballroom culture in the 50s and 60s to fans of Young Fathers.”

Rip It Up: The Story of Scottish Pop