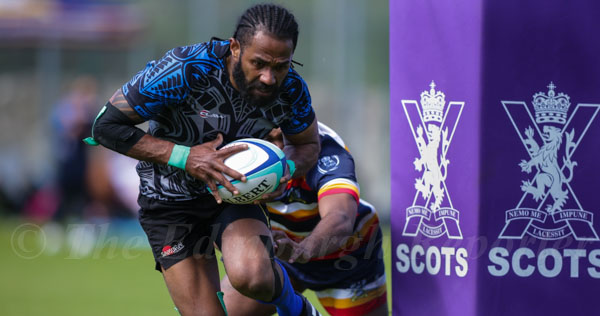 Royal Highland Fusiliers’ Veterans Sweep the Board at Glencorse Summer arrived just in time for the Royal Regiment of Scotland Rugby Sevens Tournament at Glencorse barracks as the sun blazed down for most of the day, but maybe more importantly, it didn’t rain.

A quick rearrangement of the fixture list had been on the cards as couple of the invited teams were unable to attend, but it was clear from the outset that the Military had wheeled out a considerable number of Pacific Islanders – aided and abetted in no small way by their Northern Hemisphere team mates – to do the business and help to supply a fairly high standard of Sevens Rugby for the spectators to enjoy.

The competition, as a whole was run as a round-robin league, with the top teams playing for the trophies. It was fairly clear from the start that the two stand-out teams of the day were the Royal Highland Fusiliers Veterans and 2 SCOTS ‘A’ and both teams played a superb brand of ‘South Seas’ Sevens rugby which would not have looked out of place at many of the more well known events around the globe.

Another couple of the matches noted were the Scots Dragoon Guards 19-12 win over Glasgow UOTC who then went on to give 2 SCOTS ‘B’ a second defeat at 14-5. However, by the final three matches, RHF Vets, 2 SCOTS ‘A’ and the two University teams were the ‘last men standing’ at the end of a fine day’s rugby.

First of the three was between the two Army sides and, in quite a feisty encounter, 2 SCOTS quickly opened up a 12-0 lead from a couple of well worked tries. However, the RHF Vets overcame the territorial domination of their opponents and scored a converted try just before the break for 12-7.

The second half was a much tighter affair with neither side able to make a great deal of headway until the dying seconds when RHF Vets put their No.6 through the centre to score under the posts. The conversion then gave them the extra points for the win at 14-12. Edinburgh were first on the board for 5-0 and then, despite sustained pressure on their line from Glasgow, forced a knock on and, from the resultant scrum in their own 22, went the length of the pitch for 10-0.

Glasgow pulled a try back soon after the break with a nice kick-chase which resulted in an unconverted try and 10-5, then drew level a few minutes later, turning over opposition ball from an Edinburgh side pinned in their own half.

As the final whistle drew near, Edinburgh piled on the pressure down the centre and, once the defence was pulled in, sent their man down the outside for the, converted, winning try and 17-10. Final match and trophy decider was another Vets v 2 SCOTS battle, but this time the Vets just didn’t have the legs and went down to their, seemingly, younger and fitter opponents, who ran – or walked in one case – four unanswered, converted tries for 28-0.

However, overall, the RHF Vets had done enough to win the overall and were awarded the Royal Regiment of Scotland Sevens Shield with one of their number managing to pick up the Cup for Player of the Tournament. Despite a couple of the invited teams not being available on the day, the Royal Regiment of Scotland stepped up to the mark and provided players and spectators with a brilliant day out.

Images from the event will appear here over the next few days.