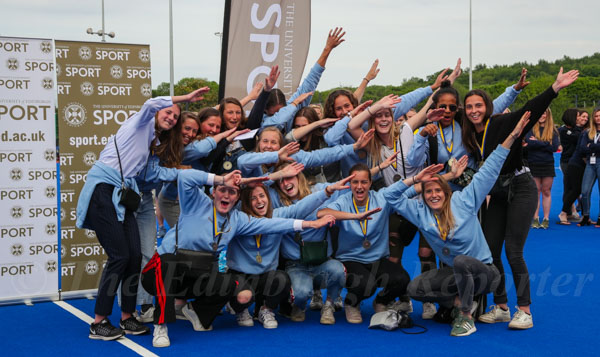 First teams on to the bright, blue pitch were Swansea City and Gingtra Strekte in their play-off match. Swansea were first on the score sheets with a goal from open play after seven minutes, but neither team could find the net – Swansea, possibly, had more shots on goal – for the remainder of the half so it finished 1-0 to Swansea.

The scores remained level until the first minute of the fourth quarter when Gintra scored from a penalty corner strike. They then scored an identikit goal four minutes from the whistle, before adding a third with 10 seconds to go, taking advantage of Swansea’s kicking back slipping. Final score 3-1 to Gintra.

Metrostroy were always in charge in their match against Italy’s CUS Pisa. Two first half goals, the first four minutes in to the first quarter, followed by a second three minutes into the second and a third three minutes from the break. Pisa didn’t spend too much time in the opposition half, but whenever the penetrated the ‘D’, they made the keeper pull out the odd spectacular save.

However, the Russian side were too strong and a fourth goal from a penalty corner – one of many – in the second half sealed the win. Pisa pulled one back late in the third quarter, but the match finished with Metrostroy on top with a 4-1 win. Another hyper-dominant display by Belgian side, Braxgata saw eight goals past Rottweiss. Two in each of the first two quarters meant a 4-0 half time score, with Rottwiess struggling to make any territorial gains.

Another two goals in the third quarter, followed by a third just before the break, put the game well out of sight. Rottweiss then scored two goals in quick succession in the fourth quarter as Braxgata took their foot off the gas a touch. The got their foot back on with a couple of minutes left to score again for a final score of 8-2, winning the match and promotion to EuroHockey 2. Which just left the final match of the weekend. This was an all Scottish – the teams, at least – affair between Edinburgh University and Clydesdale Western.

Level 0-0 at half time, both sides had made breaks, but Edinburgh had looked the more likely to open the scoring. Which they did nine minutes into the second half from open play, Sam Judge finishing off a fine move.

Western came storming back and won several penalty corners, none of which were converted. However, as the clock hit 45 seconds, a bit of a mix-up in the Edinburgh defence saw a PC awarded for foul play, but neither this, or the follow up were put away and Edinburgh ran out winners 1-0. After the matches were over and done with, all that was left to do was present the various awards and, once again, Braxgata cleaned up Winning top goal scorer with Silke Steenackers, top keeper with Megan Simons, top player with Shaunda Ikegwuono and – needless to say – top overall team award for the weekend. Edinburgh University, the host club, could ‘only’ come away with a set of medals for winning promotion to the next tier, EuroHockey Club Challenge 2. But, that’s for next season.