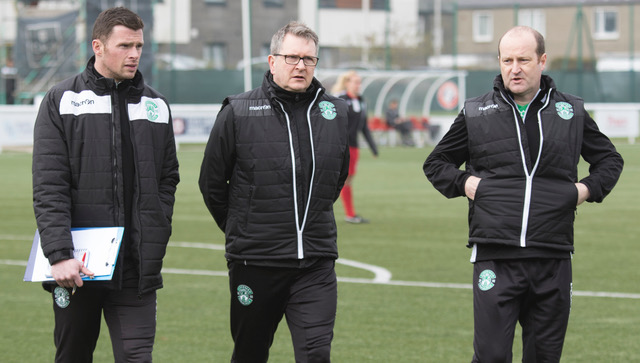 Grant Scott (Above right) has been appointed Hibernian Ladies’ Head Coach after taking interim charge for a period of five weeks.

Scott took up the role of caretaker Head Coach after the resignation of Kevin Milne in March.

His run of games as caretaker saw Hibernian face Glasgow City and Celtic in the SBS SWPL before meeting City again in the SWPL Cup Semi Final with Hibernian unbeaten in all three and advancing to the final of the League Cup.

On his appointment, Scott told Hibernian Media:“Obviously I’m delighted to accept the position and very grateful to the club for the opportunity.

“I want to thank the players for their commitment and the backroom staff for their support during the interim period. For me nothing changes going forward, we’ll work hard together to produce performances that make sure we’re competitive in every competition.”

The game kicks off at 1pm on Sunday 6 May, with entry £5 for adults and £3 for concessions.