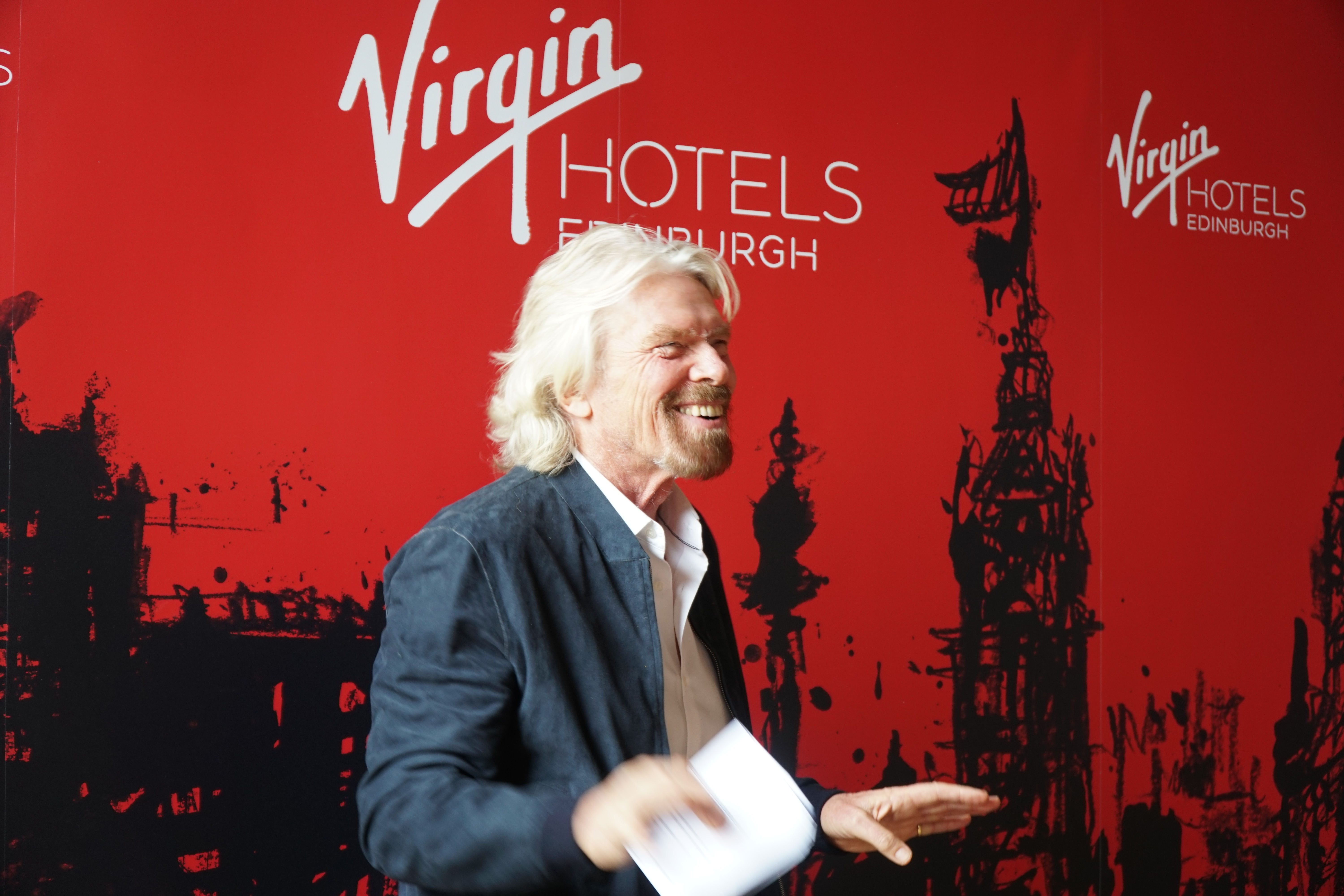 To celebrate Virgin Hotels’ new venue to Edinburgh, Sir Richard Branson swept into India Buildings with the CEO of Virgin Hotels, Raul Leal to speak to the press who were waiting there. He then went on to a party on the upper levels to press the flesh of the great and the good, including The Rt Hon Lord Provost of the City of Edinburgh, Frank Ross, and the Minister for International Development and Europe Alasdair Allan who both took time to speak to The Edinburgh Reporter about the new hotel development.

Alasdair Allan said : “I am here representing The Scottish Government because this is an interesting development to see this happen. It is interesting to see someone coming in and making use of and developing listed buildings but also it is good to see the prospect of more jobs in the middle of Edinburgh as well.” The Lord Provost was previously Economy Convener and always has the economy of the city in his sights. He said : “I think what we are seeing here today is probably two major things. One is the introduction into the city of the Virgin Hotel brand, a five star hotel brand which is much needed in the city.

“The second thing is that we have an area of the city which has become a bit rundown and in need of regeneration. I know that there are some opposing views of what’s going on, but what’s important is that in this development there are three listed buildings. They are currently in a poor state of repair. As part of the plans for this new hotel these listed buildings are going to be restored and maintained and opened up again to the public. I think that is a key element.

“There were plans to extend the Central Library about ten years ago, but since then library provision, not just in Edinburgh but across the world, has changed significantly. There are now downloadable digital books and so there are no current plans to extend the library, and have not been any for about ten years. People don’t always like to see change in a way which does not fit with their picture of the city, but what I look at here is that we have a selection of listed buildings which are decaying. They are part of the history and heritage of our capital city and this is an opportunity to restore those and bring them back into as use that allows the citizens of Edinburgh can see them in their former glory. Was at India Buildings earlier for launch of hotel development by @virginhotels and spoke to our first citizen of Edinburgh @LordProvostEdin and Minister @alasdairallan and @richardbranson who said hello pic.twitter.com/HvuvWC6MSH

Sadly Sir Richard did not have a moment to speak to The Edinburgh Reporter directly, (you will have to go to STV and The Scotsman for those interviews), but we listened to what he said during the short speeches. Raul Leal the CEO of Virgin Hotels said that he was honoured to be in Edinburgh today to mark the beginning of their first international property, and thanked the city council in particular for their welcome. He continued : “What a culture and heritage there is in this city. It is a perfect destination for the first Virgin Hotel international.

“As a brand we have fans who love our brand because we are authentic. Our model in Virgin hotels is ‘exclusivity for all’. Everyone is welcome in our hotels. Our point of view on the customer experience is that we want everybody, especially the community, to be proud of what we do. India Buildings mean so much to so many people in this community. We hope that our development of this building enhances the beauty of the destination that we already have.

“When we took over our first hotel in Chicago it was a historic office building similar to this. The community had a vested interest in that building for a long time. We wanted to be sure that whatever we did with that building it was something that the people approved of and wanted to be a part of. It has been so well received it is really now the community’s hotel.”

Sir Richard Branson explained that his grandparents were both from Edinburgh (although his wife is from Glasgow). He said : “I know that our team can bring this hotel to Edinburgh with tremendous good taste and make something that Edinburgh can be really proud of. When we first started in Chicago the building was even more derelict than this is. On the back of the Chicago hotel and others in the US it has given me confidence to roll this out to other countries.

“What we try to do in Virgin Hotels is do it with class and fun. We make sure that all the local people feel welcome too. Everyone in Chicago ends up on the rooftop….” (We wonder if that is a clue as to the eventual look of India Buildings…) It will be a massive building, made only more evident when I looked out the back window over the digging which is going on to the rear. There will be a separate entrance on Cowgate incorporating the church building there.

The ceremony held tonight was run in conjunction with The City of Edinburgh Council and developer Jansons Property. Representatives from Flemyn who own the building were also there to witness an historic event. This is the first time that Virgin Hotels have branched out overseas.

For Edinburgh it is also historic, as this building is of great architectural importance to the city. The developer has confirmed that the design team will try hard to preserve its notable elements while adding a sense of style and sophistication.

There will be 225 Chambers and Grand Chamber Suites, several dining and drinking outlets, including the brand’s flagship space, Commons Club, as well as meeting spaces.

The property will offer a mix of old and new. Due to open in 2020, Virgin Hotels Edinburgh will be completed in partnership with owner Flemyn, a family office which makes direct investments in real estate, and developer Jansons Property. The hotel will be managed by Virgin Hotels, and asset managed by Siggis Capital.