It is Holmes on home territory for Conan Doyle’s savant sleuth. Doyle took inspiration from the pioneering work of Doctor Joseph Bell whose application of deductive/forensic science at Edinburgh Royal Infirmary later saw him invited to offer ideas towards catching Jack The Rippper. More productively, he insisted that his students observe scrupulous hygiene when examining pregnant women – ie washing their hands: the rest seemed elementary.

Sherlock Holmes lives in retirement on the South Coast. He keeps bees, occasionally casts his fly fishing rod, even plays his Stradivarius when the rheumatism allows. All too aware that he’s older and slower, he’s concerned that he might have lost his touch, paranoid that he is an easy target for his enemies – there have been so many over the years. Some of whom play heavier on his mind, namely his arch nemesis Moriarty.

So when Mary Watson (wife of his former associate Dr John Watson) tracks him down to tell him she has seen her long-dead son, James, through the window of 221B Baker Street, apparently alive and well, Holmes is determined to solve the mystery and confront his own demons at the same time. 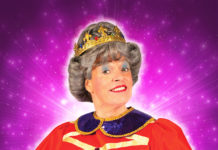