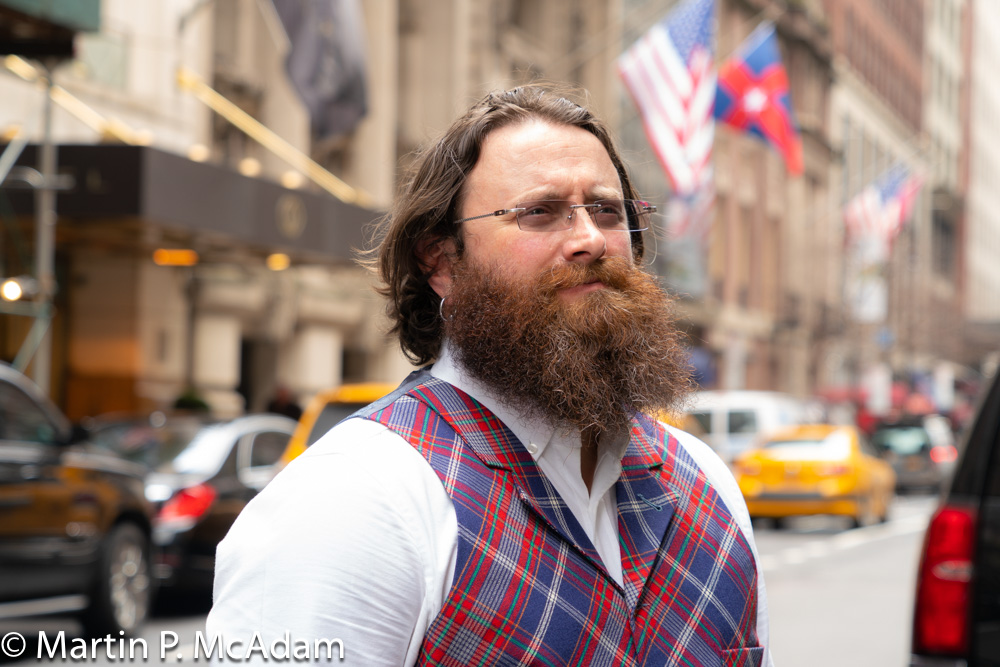 The President of New York City Tartan Week is Kyle Dawson. The gentle giant claims Scottish ancestry from Inverness and Aberdeen, and has visited Scotland many times. Today he is at the head of the parade with Grand Marshal, KT Tunstall.

He undertakes the responsibilities of getting several thousand people registered on the parade with all the bureaucracy that it entails along with a committee of volunteers. Nobody gets paid for this, they just love Scotland and celebrating National Tartan Day and holding a parade down Sixth Avenue. Kyle carries this load very lightly. He is, it seems, never overwhelmed by it all, simply taking it in his rather large stride.

Kyle Dawson President of @nyctartanweek told me what we might expect to see today and why choosing @KTTunstall as Grand Marshal was easy #NYCTW pic.twitter.com/3I7imCSrxm

The streets will be closed today from 44th street all the way up Sixth Avenue but we met up with Kyle outside the Algonquin Hotel yesterday when traffic was still flowing.

Kyle told me :”There will be no cars here, just hundreds of people lining up with bagpipes and kilts. It is just an amazing sight.I have been president for two years. It means that I am the face of the parade and oversee organising everything.”

On choosing KT Tunstall he is effusive. “She’s brilliant you know. She is a fantastic songwriter with a heart of gold.She is going to be perfect for us. There was a large number of people to choose from but everybody was on board with the choice.”

With fifteen kilts to choose from Kyle has a bigger choice to make this morning as he looks in the wardrobe. Whichever one he picks we know he will wear it proudly as do all the other members of the New York Tartan Day Committee. This is run by Americans to celebrate Scotland, and although we are here as onlookers we have been made very welcome indeed, not least by Kyle and his team.

The Parade begins at 2pm EST and there will be some Facebook Live on The Scotsman Facebook page.