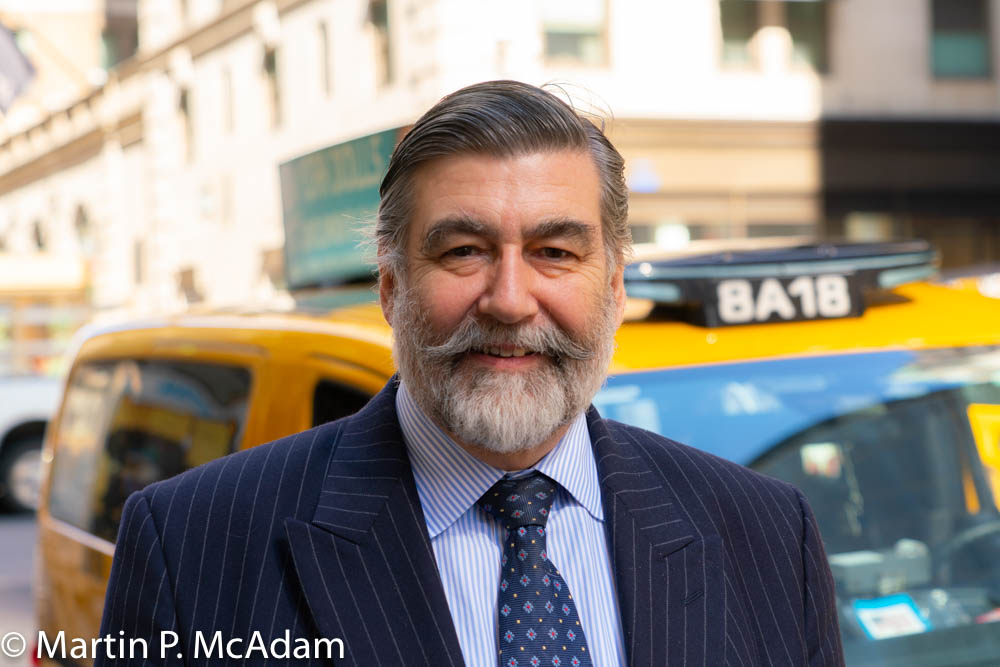 The Chair of VisitScotland  brought his red Dress Sinclair kilt with him to New York.  As a Highlander John Thurso has a few to choose from, but this is ‘one of his favourite kilts’. He said : “I wondered about bringing the green or the red but I decided to go with the full on Ancient red Sinclair, so I shall be proud to wear that with black tie at the St Andrews Association event on Thursday evening, representing Sinclairs from across the world in New York. I shall wear my bonnet with the crest on the front of it too which is a bit of fun.”

He is spending four days and five nights in New York concentrating on the business of bringing the world to Scotland, which might be fun, but is a bit of hard work too. John Thurso is no stranger to staying in hotels since he used to work in the hospitality industry, nor is he a stranger to  the US. He not only worked as a cowboy in Arkansas while still a teenager, he also married a New Yorker and worked for a company which owned property in Florida at one time.   He said he is having a ‘whale of a time’ combining his love of hotels with heading up VisitScotland, an agency which he thinks is full of people who are passionate about bringing Scotland to the world’s notice.

He explained why it is important for him to be here. He said : “America is our biggest overseas market. Our overseas visitors spend twice as much as our domestic ones.

“Overseas visitors outspend our domestic visitors by a factor of two and three to one so this is where the the biggest bang for the buck of VisitScotland can be had.

“Scotland Week is something that the diaspora here in New York invented some 20 years ago. It is a fabulous event. It brings together people who are Scots at heart, Scots who have emigrated here, people whose parents, grandparents and great-grandparents came here and people who just like the idea of Scotland and the wonderful mix that is modern Scotland. That is glorious cultural heritage and the modern innovative Scotland that  is creating new industries. Presenting that can be exploited here in a way that we can convey a message to people who might want to invest in Scotland or  might like to come and work or just visit. So it is VisitScotland getting the maximum value for the scarce resources that we all compete for. This is a really important event for us.” Lord Thurso has not been to Scotland Week before, but will parade down Sixth Avenue on Saturday in his Ancient Sinclair. “I will be in my day kilt on Saturday with my bonnet. I am sort of a clan chief but didn’t bring the eagle feathers across the Atlantic! I am clan chief of the Sinclairs of Ulbster which is a sept of the Sinclairs. The paramount chief of all the Sinclairs is my cousin, Lord Caithness.”

Disagreeing with any views of Scotland Week as cheapening our heritage and tartan, he continued : “This week is something that people in America developed. It is their expression of culture in exactly the same way as the St Patrick’s Day Parade is the Irish expressing themselves in New York. It would be quite rude and insulting if we were to come along and tell them they have it all wrong. However it is done, it is their way of doing it, and I view it as a fantastic opportunity to talk about our great culture and history.

“The other evening we hosted a reception where we were presenting stories of modern Scotland, of people who have moved their companies’ headquarters to Glasgow in one particular case. Informatics, biotechnology, all of these things are what Scotland is doing extremely well. If we can hook somebody to come and visit us because they like what happens here this week and can then introduce them to the other things that we have to offer then to me that is simply clever fishing!”

We met the chair of @VisitScotNews who will be parading in #NYCTW Parade later today – He told us why it’s important for him to be here pic.twitter.com/hATv3z7IxI

VisitScotland have been involved with Scotland Week for some years in one way or another. The Chair continued : “Our job is to promote Scotland to people here to come and visit. When a major event like this takes place and it is clearly supported by all shades of government in the past and present and major Scots who live and work in the US, we would be mad not to get involved in that. If you have that kind of support this is a clear opportunity for us. We don’t really promote it as such, but we work with it and we do a lot to facilitate it.”

Lord Thurso also hosted a breakfast on Friday morning in New York of alumni, Americans who studied either as undergraduates or postgraduates in Scotland. He is quick to point out that five of the Scottish universities are in the top 200 universities of the world. He concluded : “I think we punch above our weight just a tiny bit! We have lots of world class research facilities, so we attract a lot of people who eventually run big pharma companies or something equally important.

“They all carry a great fondness for their time in Scotland, and so we took a decision to host events for them when we are anywhere in the world.”