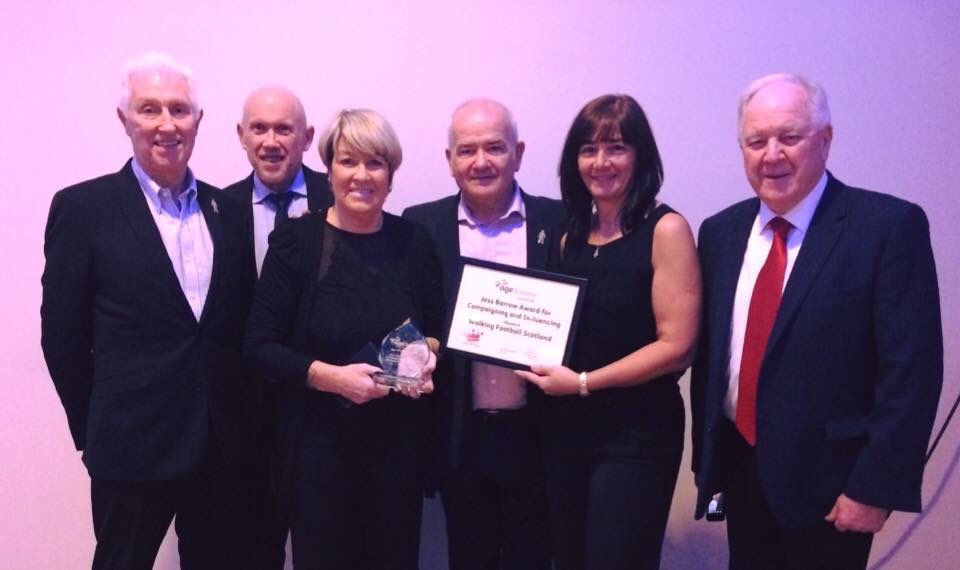 Newly formed charity Walking Football Scotland (WFS)  has been honoured at the Age Scotland 2018 National Conference and Awards Ceremony which was held at the Raddison Blu Hotel in Glasgow on Tuesday 20 March.

The event, described as ‘Later Life in Scotland – Taking the Long View’: was opened by life peer Lord George Foulkes who was part of the judging panel along with Brian Sloan, Age Scotland’s Chief Executive.

A large invited audience enjoyed a presentation on The Changing Role of the Third Sector and Older People by Dr Robert Means, Professor of Health and Wellbeing from the University of the west of England which was followed by a question and answer session with Marjory D’Arcy, Grampian 50 Plus Network, Bill McDonald, Renfreshire Seniors Forum and Derick Tai from Hawick Senior Citizens to celebrate 75 years of older people’s groups in Scotland.

This was followed by ‘dance across the decades’ led by Chris JS Wilson and members of Still Dancing from Dance House in Glasgow.

The morning session concluded with a superb presentation by Scotlands Makar Jackie Kay.

The award was in recognition of work done by the newly former charity whose aims are to improve, maintain and promote the physical mental and social wellbeing of older adults through walking football.