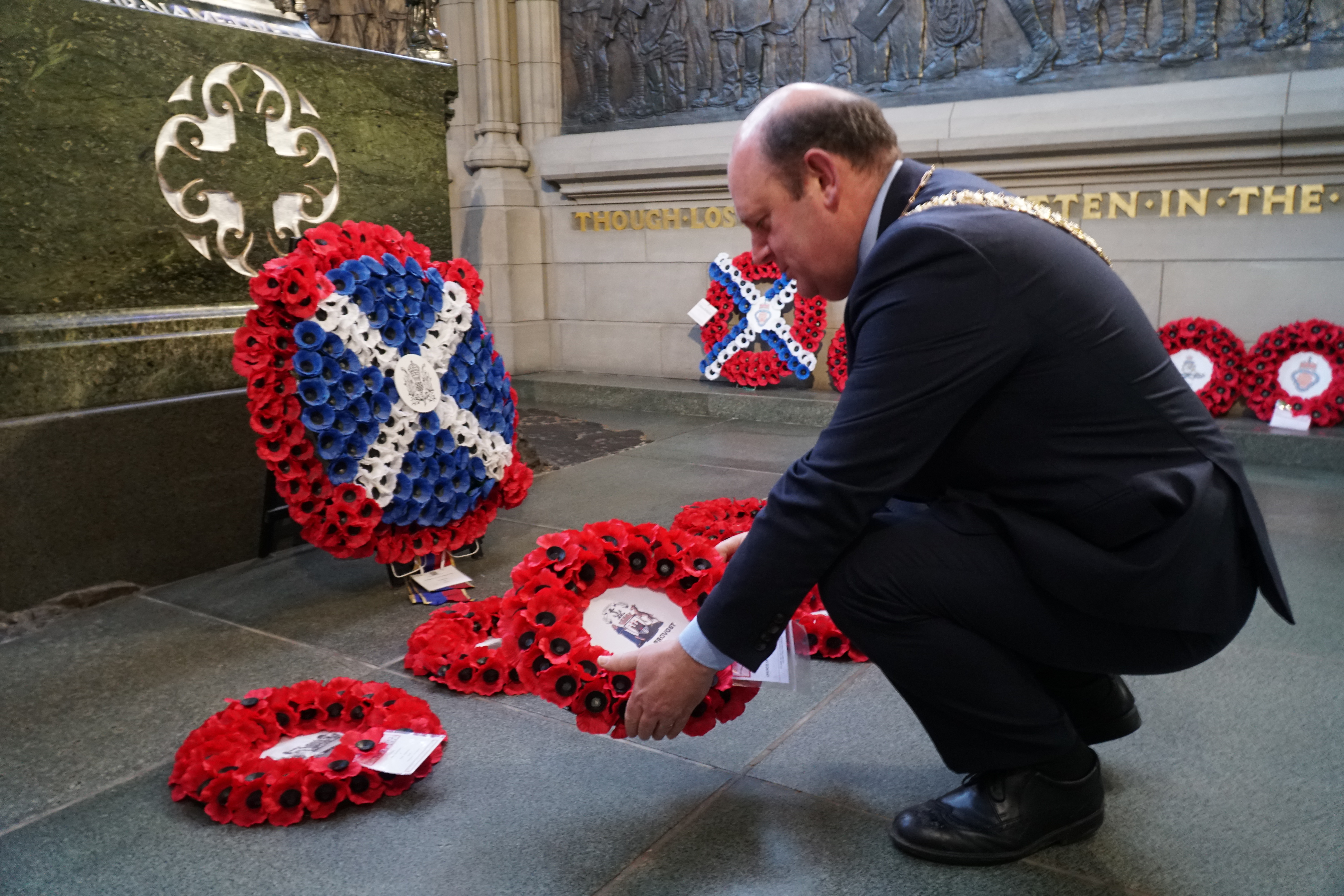 The Rt Hon Lord Provost of the City of Edinburgh, Frank Ross laid a wreath this morning at Edinburgh Castle as part of a memorial service for the captains of the Scottish and French rugby teams who died during World War One.

He was there at the invitation of the Governor of Edinburgh Castle Major-General Michael Lawrence Riddell-Webster, and was joined by some descendants of both of the players. This is only the beginning of what will be an historic day for Scottish and French rugby. The Auld Alliance Trophy has now been created and will be awarded annually in a similar fashion to the Calcutta Cup when Scotland and France play in the Six Nations. Eric Milroy was captain of the Scottish team in the early 20th century and once played against the French captain Marcel Burgun. The two families met for the first time this morning.

Lt-Col Colin McGrory welcomed the small party to the Scottish National War Memorial at Edinburgh Castle, the first part of the Milroy tour which is taking place in the city today.

The Scottish National War Memorial was opened in 1927 as a tribute to the 144,000 Scots who died in World War One. The idea was conceived during the latter part of the First World War in the minds of a few determined individuals including the Duke of Atholl, a war time commander who served in the Boer War and at Gallipoli. His vision with the support of the then Prince of Wales was realised when construction work began here in 1924. To this day it is a place of pilgrimage and solace for those whose loved ones friends and relatives are recorded in these books.

The Lord Provost said : “Welcome to the capital city. We gather today to remember all those rugby players who lost their lives during WWI. They are remembered through this commemoration of the 1914 French and Scottish international captains Marcel Burgun and Eric Milroy. One the daring French pilot, and the other the unassuming Scottish accountant. The Auld Alliance between the Kingdoms of Scotland and France originally dates back to 1295, originally a military and diplomatic alliance but has developed into much more.

“I, like Eric Milro,  am a Watsonian and even today the club still plays in the club colours of maroon and white. Watsonians have had roles in all three of Scotland’s Grand Slam wins.”

Sir Eric Milroy is a great nephew of the former Scottish captain. He said : “It is fitting that we start this weekend in this place. The original idea was to honour  the internationalists who died during the First World War and the Scottish regiments who played such a role in France around Amiens and in the Somme. We are very conscious that we commemorate them today with family pride, but we are also conscious that they are representatives of a much larger body of people. They represent their own two teams and all the thousands of club players and schoolboy players who exchanged the fields where they played rugby for the fields of war in France.”

Many have been involved in both the memorial and the creation of the Auld Alliance cup, and this includes the MP Joanna Cherry QC MP. This morning Ms Cherry has laid down an Early Day Motion at Westminster. It reads :

That this House celebrates the historic and continuing ties between Scotland and France; welcomes the creation of the Auld Alliance Trophy to be awarded annually when Scotland and France meet during the Six Nations; commemorates the memories of the 31 Scottish and 22 French international rugby players killed during the First World War; further celebrates the lives of the Scottish international captain Eric Milroy, the Prince of scrum-halves, who learned his skills at George Watson’s College in Edinburgh South West constituency and the French international captain Marcel Burgun, a remarkable pilot of rare intrepidity and recipient of the Croix de Guerre and Palm who both gave their life in the Great War and in whose names, along with all their fellow rugby players, the trophy is dedicated; and notes the passion and dedication of Patrick Caublot of Amiens Rugby Club for originating the idea, the work of David Anderson QC, Eric Milroy’s great-great-nephew, the Scottish Ruby Union and the Federation Française de Rugby in creating the trophy.