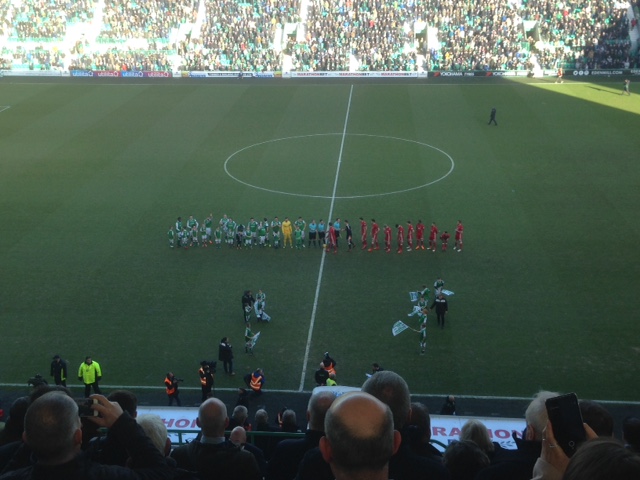 Hibs produced their best performance of the season to outplay Aberdeen at Easter Road this afternoon.

Hibs started brightly with Scott Allan demonstrating the skills that made him such a favourite during his first spell with the club.

The first half was evenly matched with play raging from end to end and both teams having chances.

The second half however was one way traffic.

Aberdeen replaced Adam Rooney with Stevie May at the break before Hibs took the lead in the 46th minute.

Hanlon sent a great through ball into the path of MacLaren whose shot was saved by Freddie Woodman. The rebound fell to Allan who again set up MacLaren and Woodman again saved his shot however the ball flew into the air and Martin Boyle was on hand to head the ball into the net.

Hibs mounted attack after attack and Aberdeen had three players booked for fouls in quick succession as tempers flared.

Hibs doubled their advantage on the hour mark when Allan slid the ball to Hanlon whose shot front the edge of the box was controlled by Florian Kamberi who turned and fired the ball into the bottom corner of the net to the delight of the home supporters.

In front of a packed stadium, the Hibs players continued to attack and only a combination of bad luck and good defending prevented them adding to their advantage and the game ended 2-0.

After the game a delighted Lennon said: “I am delighted. There’s no question that was our best performance of the season. We were outstanding and thoroughly deserved the win and played some superb football.”