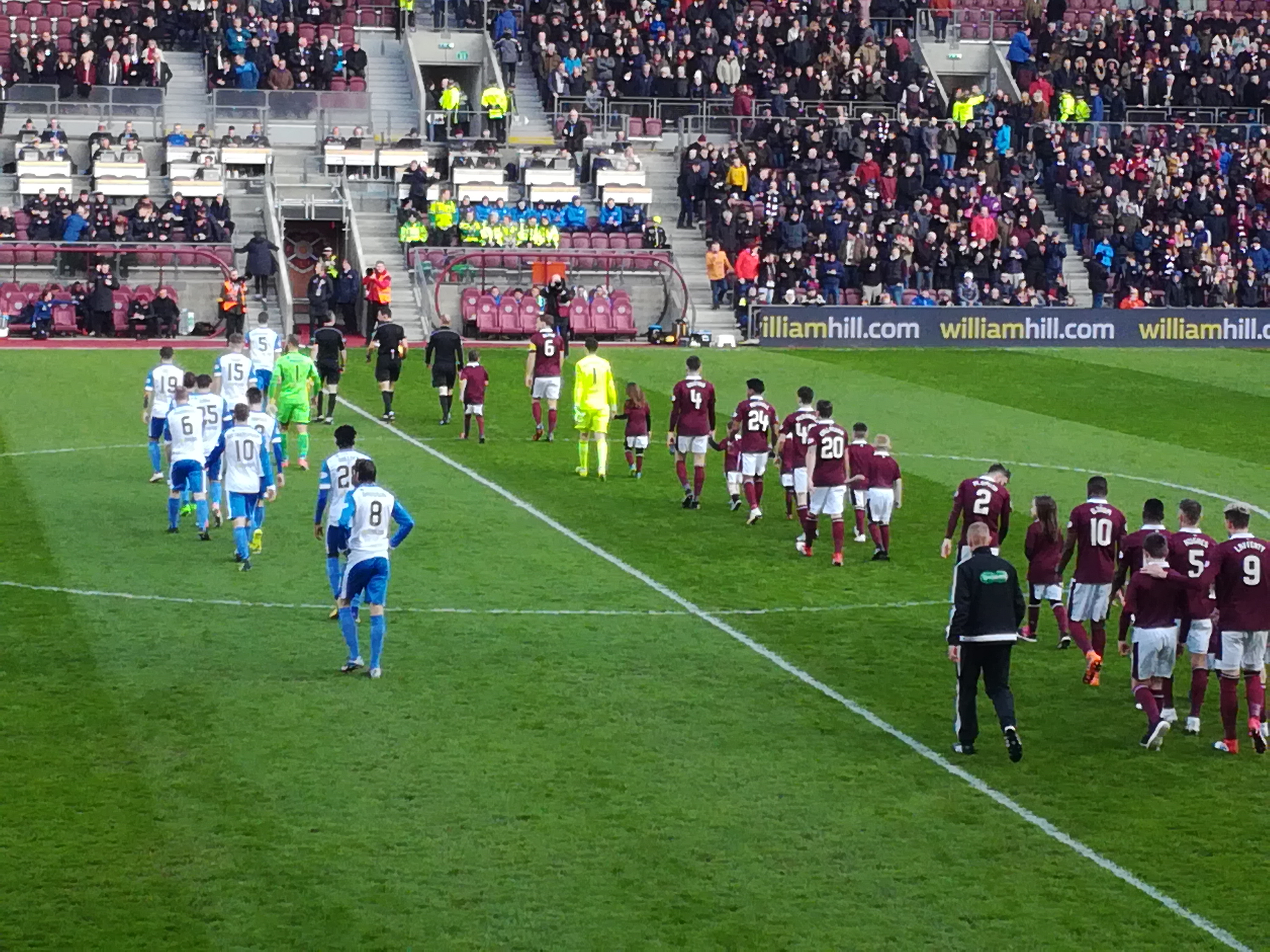 Hearts completed their second victory over St Johnstone in the space of seven days and in doing so reached the quarter finals of the William Hill Scottish Cup for the first time since they last lifted the trophy in 2012.

Two goals from Kyle Lafferty and a spectacular effort from Demetri Mitchell earned a deserved victory for Hearts as the Maroons produced a much-improved display from that which recorded a narrow league win last Saturday.

Hearts Head Coach Craig Levein recognised changes had to be made from last week when St Johnstone could count themselves unlucky not to have taken something from the game. One change was enforced and there were groans from the Hearts support when they learned Steven Naismith was injured and would not take part. Michael Smith, Aaron Hughes, Ross Callachan and Tony McDonald were drafted into the side with Connor Randall, Danny Amankwaa and David Milinkovic moving to the substitutes’ bench.

A driech start to the day turned into a pleasant enough afternoon for early February and Hearts began much brighter than they had against the same opposition seven days earlier. Kyle Lafferty was playing the lone striker with young Tony McDonald just behind him and it was the big Northern Irish striker who gave Hearts the perfect start after just seven minutes with a goal out of nothing. Shaughnessy took a throw-in for St Johnstone on the halfway line but opted to throw the ball across the pitch rather than forward. Arnaud Djoum read the situation perfectly and intercepted to head the ball towards Lafferty. The former Norwich striker galloped forwards and finished brilliantly with a shot beyond Saints keeper Mannus and into the corner of the net.

Saints hit back and after a foul from Jaoquin Adao on Davidson, former Hibee Wotherspoon tried his luck with the free-kick which just went wide.

In the 29th minute more slack play from Adao saw Tanser sprint forward and his cross into the Hearts penalty box would have proved dangerous had there been a Saints player there to take advantage.

Hearts were looking to impose themselves in midfield, certainly more than they did last Saturday and Arnaud Djoum was looking like he was in the mood.

Saints had a chance to equalise just before half-time when Wotherspoon’s cross was met by Kane but his effort on goal was saved by Hearts keeper Jon McLaughlin.

Hearts began the second half in determined fashion. Just three minutes in and Ross Callachan, getting through a power of work, collected the ball from Lafferty’s knock-down. The former Raith Rovers man took a moment before firing in a shot which went inches wide. Hearts second goal, however, was merely delayed.

In the 53rd minute came one of the goals of the season at Tynecastle. Hearts broke forward quickly following a St Johnstone attack. Fine play from the hugely talented Tony McDonald set up Adao who fired a fine pass to Djoum. The Cameroon international raced down the right wing, looked up and saw Demetri Mitchell. Twenty yards from goal the on-loan Manchester United man took a touch before firing an unstoppable shot beyond Saints keeper Mannus and into the net. Tynecastle – well, three quarters of it – rose to acclaim a brilliant goal.

The roof fell in on St Johnstone’s cup hopes just four minutes later. Kyle Lafferty raced forward again and passed to his countryman Michael Smith who fed the ball back to Lafferty who finished from close range.

That was enough for many of the travelling support who headed for the exits. They almost missed a fourth goal for the home side when Michael Smith’s cross was only partially cleared by the unfortunate Shaughnessy and Connor Randall had all the time to fire the ball home. But the substitute delayed his shot which was enough for Tanser to clear off the line.

It finished 3-0 to Hearts and the Maroon Army are at last enjoying a decent run in the William Hill Scottish Cup having been deprived of one since they demolished Hibernian in the 2012 final.

“I said after the game last Saturday when we didn’t play well and won that I felt I felt good about this week, because I knew we could play much better than we did last week” he told the official Hearts website.

“That proved to be the case today and I thought we ran out worthy winners in the end.
“I’m starting to feel good about the team. It’s a pleasing day for everyone associated with the club.”

“Kyle (Lafferty) is accurate with his finishing,” he said. “We’ve seen that with the goals that he’s scored for us this season.

“The first one was really difficult. Arnaud, who I thought looked more like himself today and was excellent, managed to win the ball and play him through, and it was a really difficult angle, but he controlled it perfectly and managed to sneak it inside the post on the far side.”

“I was also really pleased for Demetri Mitchell” the Head Coach continued “You could see the delight on his face and I love to see that myself. I thought he had an excellent performance today and that goal just capped it off for him.

“In recent weeks he’s looked like scoring but hasn’t managed to do it through a combination of good goalkeeping, actually. I was thrilled to bits for him today.”

Hearts now await the draw for the quarter finals which takes place on Sunday.

Top Man: Arnaud Djoum looked much more like the player we know he can be but the vote goes to Demetri Mitchell – what a signing he has proved to be for Hearts