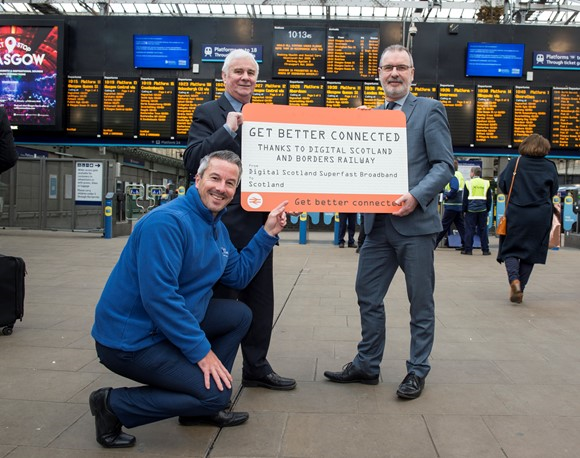 The Digital Scotland team have joined forces with local authorities and the Borders Railway to let people living along the rail route know that it’s full steam ahead for superfast broadband!

The company were joined at Waverley Station by Councillor Gavin Barrie from the City of Edinburgh Council and Councillor Russell Imrie from Midlothian Council to celebrate fibre availability along the Borders Railway route.

More than 32,000 homes and businesses across Edinburgh and Midlothian are among more than 850,000 across Scotland now able to connect to high-speed fibre broadband through the £428M Digital Scotland Superfast Broadband programme.

Local areas along the Borders Railway to benefit from the rollout, led by the Scottish Government, include Newtongrange and Gorebridge as well as Borders stops such as Stow, Galashiels and Tweedbank. More local coverage across Scotland is to follow as engineers from Openreach – Scotland’s digital network business – continue work on the ground.

Local people can check the Digital Scotland website – scotlandsuperfast.com – to find out if they are able to access the latest fibre broadband technology. People need to sign up with an internet service provider, as upgrades are not automatic.

Councillor Gavin Barrie, Housing and Economy Convener, said: “Digital connectivity is a key priority for us and I welcome this initiative as it delivers higher broadband speeds to both homes and businesses across the route allowing faster access to online services.”

Councillor Russell Imrie, Midlothian Council’s cabinet member with responsibility for the Borders Railway said: “High speed broadband is no longer a luxury but an essential. We need it here in Midlothian to help make the county an even greater place in which to live, work and visit.”

Fibre broadband offers fast and reliable connections at speeds of up to 80Mbps1 and there are many suppliers in the marketplace to choose from. Whether you own a business, work from home or want to keep in touch with friends and family, fibre broadband enables multiple users to connect to the internet at high speeds and get better, faster access to online services.

Sara Budge, Programme Director for Digital Scotland Superfast Broadband, said: “It is fantastic to see fibre broadband benefiting local residents and businesses along the length of the Borders Railway route.

“I would like to thank Councillor Gavin Barrie and Councillor Russell Imrie for joining us to celebrate that fact that, together with Borders Railway, we are making Scotland more connected.”

BT Group is investing £126 million in the rollout, and the total project value includes around £18 million which is being reinvested back in to the programme during 2018 as a result of stronger than expected early take-up.

Robert Thorburn, Openreach fibre partnership director for Scotland, said: “Thousands of people and businesses across Edinburgh and Midlothian now have the opportunity to access their best-ever broadband speeds when they sign up with a service provider.

“Industry regulator Ofcom has highlighted that many consumers could be accessing significantly faster speeds by upgrading2, and I‘d urge local people to check if they’re able to order the high-speed services that are now widely available across Scotland

“With work continuing into 2018, we’re right on track to deliver.”