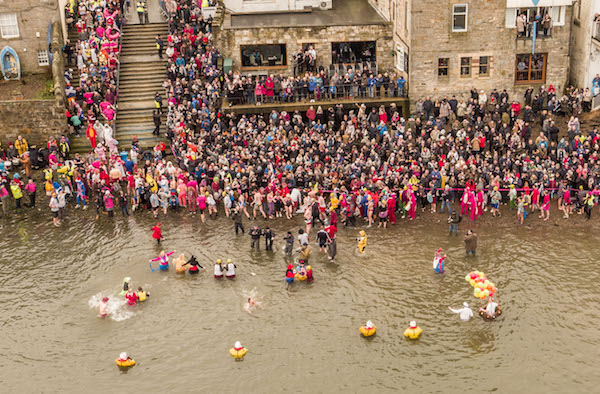 The two directors of Underbelly, organisers of Edinburgh’s Hogmanay, took part in the Loony Dook on New Year’s morning, and in the madness of the moment Charlie Wood managed to lose his glasses in the Forth.

When we met him later on yesterday he had recovered a little from the freezing shock by having a hot bath, but was still waiting for a spare pair of specs to be brought to him!

There were over 1000 Dookers including former Lord Provost Councillor Donald Wilson who used the opportunity to raise funds for the RNLI who have a base in South Queensferry. Thousands of spectators lined the streets to cheer on the brave and the bold, decked out in every manner of fancy dress imaginable ranging from a group forming a replica of the Forth Rail Bridge to a Hot Air Balloon, The Wizard of Oz and a whole raft of patriotic getups, capturing the 21 countries represented by those who took the plunge, raising money for a huge variety of charities in the process.

Live Edinburgh News have a great selection of photos – just click here to see them.

Charlie Wood and Ed Bartlam, directors of Underbelly and of Edinburgh’s Hogmanay said: “Last night we welcomed 75,000 people to Edinburgh for the BEST NEW YEAR PARTY EVER at the epic 25th anniversary Edinburgh’s Hogmanay. What better way to clear those foggy heads from the night before than a swift dip in freezing cold water? Today, new year’s day, we joined over 1,000 participants from 21 countries on the shores of South Queensferry to brave the waters of the Firth of Forth for the much loved Loony Dook.

“We loved being ‘Dookers’ welcoming the New Year. It’s terrific how much energy and excitement the Loony Dook generates and the fantastic fancy dress costumes people make and the money generated for charity. We’d like to take this opportunity to wish everyone a Happy New Year!” Over 75,000 people gathered on Hogmanay in Princes Street, on Waverley Bridge and Castle Street, and also at the various locations in Princes Street Gardens to listen to music from Rag’n’Bone Man who wowed the crowd with his own music before leading them in Auld Lang Syne after the fireworks. The fireworks were set to a soundscape created by Skye band Niteworks in collaboration with Dan Jones, and they were spectacular. Brand new fireworks called planets stunned the audience with their fizzy sherbet middles and a drum solo in the middle saw showers of pink and gold arrows ricocheting into the night sky. Head over to our Facebook page for our full suite of fireworks photos.