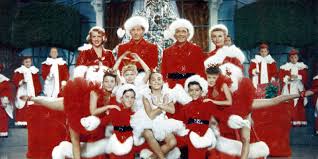 Fancy getting away from the Christmas party season? There’s lots to see at the Filmhouse this week. But, yes some of it has a Christmas theme!

Human Flow Director Ai Weiwei: Over 65 million people worldwide have been displaced from their homes due to conflict, the greatest number since World War II. Human Flow makes an ambitious attempt to try to capture the staggering scale of this crisis and understand its profound impact on humanity. Run time: 140 minutes, certificate 12A. Screenings 19-20 December. The Party Director Sally Potter: Potter weaves comedy and tragedy in this compelling drama. Janet (Kristin Scott Thomas) has just been appointed to a key ministerial position in the shadow cabinet. She and her husband Bill (Timothy Spall) plan to celebrate this with a few close friends. As the guests arrive, the party takes an unexpected turn when Bill suddenly makes some shocking revelations. Run time: 71 minutes, certificate 15. 19 December only. Thelma directed by Joachim Trier: In a fascinating coming-of-age drama, with elements of the supernatural, Trier creates a memorable story about Thelma, who escapes her rigidly religious family and suffers a seizure triggered by her powerful feelings for Anja, a fellow student at the University of Oslo. Run time: 116 minutes, certificate 15. Screenings 19-21 December. White Christmas directed by Michael Curtiz: In this Christmas classic, two singers (Bing Crosby and Danny Kaye) team up with a sister act (Rosemary Clooney and Vera Ellen) to make one of the greatest duos in show business. The soundtrack features Irving Berlin classics, such as ”White Christmas” and ”Blue Skies”. 120 minutes, certificate U. Screenings 19-21 December.