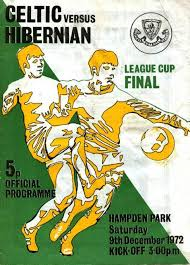 Hibs’ fans of a certain age are in for  treat this afternoon as they have the opportunity to welcome back players from arguably the finest side in the club’s history.

45 years ago, Eddie Turnbull’s legendry Hibs team defeated Jock Stein’s  Celtic 2-1 at Hampden Park in the final of the League Cup and this afternoon players from that side will be presented to the fans at half time.

That was a glorious period for the club and three weeks after picking up their first national cup in 70 years thanks to goals from skipper Pat Stanton and Jimmy O’Rourke, the same eleven players travelled to Tynecastle and won 7-0.

That result moved Hibs to the top of the league and the team had a European Cup Winners Cup quarter final to look forward to.

John Brownlie recalled that period: “I have a lot of good memories about that particular game. I actually scored the only goal against Rangers in the semi-final, and some of their fans still won’t speak to me because of that.

“I was lucky to play as I went over on my ankle on the Monday before the final, and struggled to get fit. ‘Ned’ kept it quiet and on the day of the match I got an injection for the pain. I managed to get through the 90 minutes but it was sore later that night.

“It was a great team performance, but it was only when I watched the highlights later that I realised how well Pat (Stanton) had played. He was immense that day and led from the front, scoring the first goal and setting Jimmy O’Rourke up for the second.

“That was probably the highlight of my time with Hibs, winning a major national competition. I had just turned 20 in the March, and I played with some great players at Easter Road. In fact I didn’t realise how good they were until I moved to Newcastle later in my career.

“Jim Heriott was the best goalkeeper I ever played with. Our central defence was excellent and Shades (Erich Schaedler) was different class. To go from the lower division to a Scotland cap was fantastic and no-one ever got past him.

“After the cup win, we beat Ayr United 8-1, then Aberdeen before beating Hearts seven nil at Tynecastle. We were on fire at the time playing some exceptional football and went top of the league.