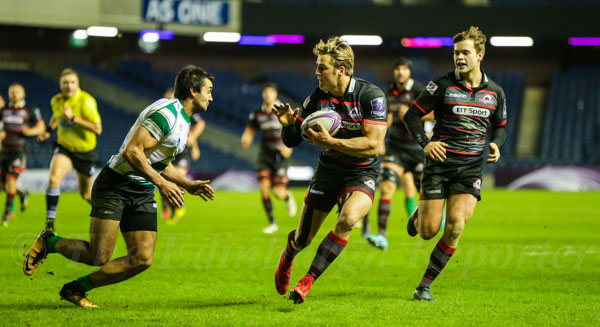 Twelve, unanswered, tries from Edinburgh on Friday in Round 4 of the ERCC Pools ensured that they were certain of qualification for the next, knock-out, round of matches.

Book-ended by a brace from Duhan van der Merwe, the home side scored seven tries in the first half for 47-0 – they had the bonus-point after 20 minutes – before another five in the second half, for 78-0, ensured qualification and the highest points haul in either of the European competitions this season.

Their opponents, Krasny Yar, provided very little opposition apart from a brief period of pressure early in the second half, during which they were, perhaps, unlucky not to score.

Other than that, there is not a lot to say about a match which was, largely, a non-event. Lack of opposition, however, did give the home side the chance to try a few things, playing players in different positions and giving a few of the non-regulars a run-out.

Possible chief amongst these was the first start for Scotland Sevens’ Darcy Graham at full back, the Gala man giving the mercurial Damien Hoyland a run for his money in the jinking and dodging stakes. His speed across the ground and ability to break tackles kept the crowd on their toes in the cold expanses of BT Murrayfield’s East Stand.

Next up in the ERCC is a double-header with Stade Francais, but given that Krasny Yar beat(!) the French side in an earlier round, Edinburgh could end the pool stage undefeated.