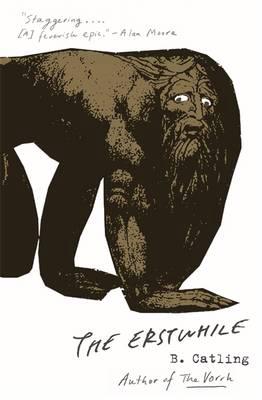 by Eris Young of Blackwell’s Edinburgh

Brian Catling isn’t a newcomer to the literary scene—he’s been writing poetry since the late nineties and creating unnerving, esoteric visual art for far longer—but with the publication of his newest novel, The Erstwhile (9 March, 2017, Coronet), anxiously-awaited sequel to The Vorrh, he’s seen a resurgence in popularity. While two years isn’t a long time to wait for a second book, to Catling’s fans it has felt like much longer, and indeed to some the emergence of a sequel is even a surprise; for a book as original and self-sufficient as The Vorrh, is a sequel even necessary? Catling’s devotees need not have worried. Like The Vorrh, The Erstwhile seems to have been created with that same winning formula, imbuing them with an originality and freshness that defies the passing of time. For a trilogy so rooted in time and place, though—colonial Africa, Europe between World Wars, the sanatorium commonly known as Bedlam—the books themselves stand apart in the landscape of the fantasy genre.

The Vorrh built up a world, drawing from ancient history and modern myth to spin a web of strikingly original and often downright strange objects, places and people. The Erstwhile, to an extent, does the opposite: it de-mythologises the forest and its inhabitants, explaining further the effects of the Vorrh on the human psyche, and giving the Erstwhile themselves a voice, so that they may explain their own painful displacement.

The book also humanises many of the characters, whether they are fully human or not. For the most part, this is a good thing: the heroes and villains which were glamorised and demonised in The Vorrh are given relatable flaws, greed and vengeance and jealousy, in its sequel. But this humanisation can at times verge on banality, for example reducing one character in particular to an archetype of devoted motherhood, at the expense of her previous, dynamic, characterisation. In any case, despite hints at a greater mystery which will no doubt culminate in the third book, there is to my mind less of the alien in The Erstwhile, less of that threatening strangeness (for example the chilling section, one of my favourite parts, told from the perspective of the anthropophagus disconcertingly dubbed ‘Loverboy’) that typified The Vorrh. Whether these changes are good or bad, necessary or not, however, is for the reader to decide.

Catling spoke at Blackwell’s Bookshop earlier in the year, about The Erstwhile and its predecessor, but also about the craft of writing (Catling is more of a gardener than an architect, for those who subscribe to that dichotomy), and the importance of the visual in his creative process. Indeed the language of Catling’s books, the motifs which figure as prominently in his art as they do in his writing, are powerfully visual: the reader is transported forcefully from African forests and deserts and seaside cliffs to remote German townships to the dark banks of the river Thames, and haunted by the Cyclopean eye, the arrow fired out of time, long after they’ve finished the book.

With The Erstwhile, Catling manages to maintain the wild originality that typified The Vorrh: if this book is a herald of things to come then the Vorrh trilogy is sure to take its place among the enduring classics of its genre.