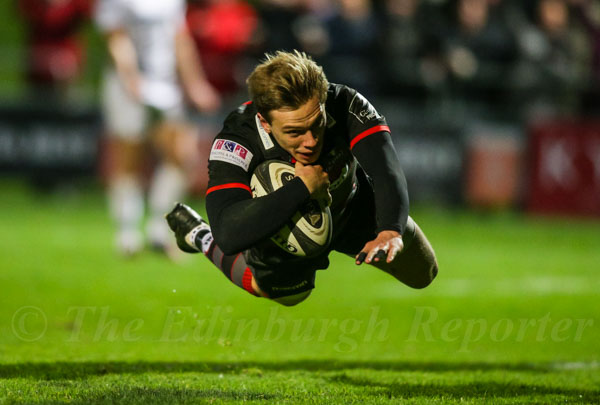 The Guinness PRO14 returned to Myreside after a couple of away matches and the first round of the European Challenge series, with Wales’ Ospreys making the trip up North.

Edinburgh were coming off the back of four straight wins, while the visitors have been struggling in the PRO14 in the early season, sitting near the foot of their Conference since Day 1.

This seemed to give the Ospreys some impetus and they dominated the next 10 minutes of the match, pushing Edinburgh back into their own 22, winning a couple of penalties to keep the momentum flowing in the right direction.

Just reward came in the 12th minute with a try from front row, Dmitri Arhip. Ospreys had pummelled the Edinburgh try line for an extended period, only a fine, scrambled defence keeping them from getting over the line before a series of rucks on the right drew in the defence and the final ball out to Arhip put him through a gap and over for the try. No. 10, Sam Davies then converted for a 7-0 lead.

Edinburgh worked their way back into the match and, when Ospreys were penalised in front of their posts, Tovey slotted the kick home for 7-3.

The visitors then returned to where they had left off, and advanced play, again, deep into Edinburgh’s 22, but the defence held again with slightly less desperation, but gave away a penalty in the 22nd minute which Davies kicked to open up the gap again to 10-3. Once again, the game switched and it was the home side’s turn to attack, but, as with the Osprey’s a few minutes earlier, penetrating the defensive line was difficult to achieve, but another penalty was kicked for touch to put Edinburgh on the offensive in the opposition 22.

Then Edinburgh scored their first – and probably best – try of the match, with full back, Blair Kinghorn, proving instrumental in the score. Attacking deep in Osprey’s 22, the ball was fired out to Kinghorn, who offloaded superbly to wing, Tom Brown, who got to within a few metres of the line before being stopped. The ball was then recycled quickly and, after a couple of phases, No 8, Cornell du Preez launched at the defence, pulling in the outside defender, leaving space down the line. He was two-man tackled, but managed to keep the ball free and offloaded over the top – ex-Glasgow’s Leone Nakarawa would have been so proud – to Kinghorn, who had an easy trot in for the try. Again, Tovey converted and it was 10-10 with 10 minutes of the half to play.

Tovey scored his second, successful penalty following Brendan Leonard’s yellow for a high tackle to take the score to 13-10, and followed it up with a third a few minutes from the break to make the half time score 16-10 to Edinburgh.

The second half started with a bang with a try from Edinburgh which started and, almost, finished with Kinghorn again. Running the ball out from the kick off, Kinghorn made ground and started a passing/offloading move which ended with Kinghorn offloading from a tackle to centre, James Johnstone, just inside the Osprey’s 10 metre line. He then made a few metres, attracted a couple of defenders and found scrum-half, Nathan Fowles in space with an inside ball. Fowles then outran the opposition to dive over behind the posts. Tovey then knocked over the conversion and it was 23-10 to Edinburgh.

The next 15 minutes of the match are all Edinburgh. Running at the defence from all angles, their offloading and recycling forced the Osprey’s into defence mode with the onslaught only ending with a turn over which Leonard cleared upfield, but, crucially, not finding touch. This signalled the start of Edinburgh’s 35+ phase play which ended when Tovey sold the most outrageous dummy and sailed through to slam the ball down for the third try. He converted to take the score out to 30-10 as the match entered the fourth quarter. For the next 10 minutes, or so, Ospreys enjoyed a long period of possession, but couldn’t make any headway, the match getting bogged down, just over half way, in the Edinburgh 10 metre zone.

The home side did gain a brief hold of the ball, but it was soon back in Osprey’s hands, but in their own half. As the end of the match approached, Edinburgh began to dominate proceedings once again and as the clock ticked over the 80 minutes, they were battering away at the Osprey’s try line again.

Something had to give and it was the visitors who blinked first, giving sub, Magnus Bradbury enough clear space to dive over next to the uprights for the fourth, and bonus point, try. Tovey then notched up his 17th point of the match and so propelled Edinburgh up to fourth in their half of the Guinness PRO 14 League.