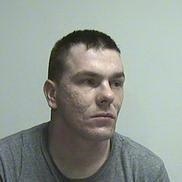 A man who targeted the same off-licence for two separate robberies earlier this year has been convicted.

Ross Cummins pled guilty to the armed robbery of the High Spirits store on Slateford Road on Saturday 22nd April and Monday 24th April at the High Court in Glasgow today.

During the first incident, 31-year-old Cummins presented a screwdriver at staff before striking one employee with a door, which resulted in the victim sustaining a dislocated knee. He then made off with £130 in cash.

Two days later, Cummins returned to the shop and presented a knife at staff before stealing the shop till, which contained £300.

As a result of inquiries carried out by Corstorphone CID he was detained and subsequently charged with these offences on Wednesday 26th April.

Detective Inspector Bruce Coutts from Corstorphine CID said: “During both of these robberies Ross Cummins demonstrated his willingness to utilise weapons and violence, proving how dangerous an individual he is.

“In the days following the incidents we conducted significant local inquiries, which identifed Cummins as being the perpetrator and he was duly charged.

“He can now expect a custodial sentence, which should serve as a reminder to others that if you are caught using, or in possession of a weapon, we will work closely with the Crown Office to ensure you  are removed from our streets.”